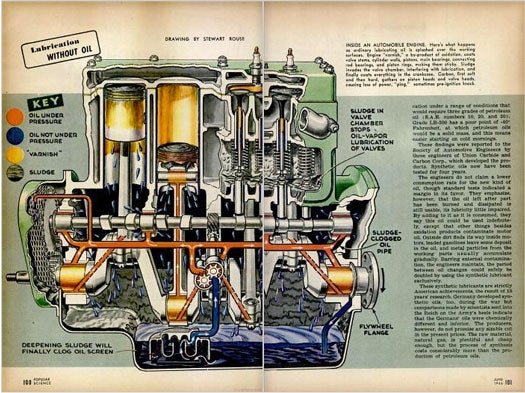 While most vehicles today use mineral oil-based lubricants, there are manufacturers championing the use of fully synthetic oils, which reportedly perform well in extreme service conditions. Synthetic lubricants become popular between the late 1930s and early 1940s when German scientists started looking for alternatives to their low supply of crude materials. Here, we discussed the perfect synthetic lubricant, which would never have to be changed and would work perfectly regardless of outside temperature. Car gears would work more smoothly since the ideal synthetic oil wouldn't produce carbon, sludge, or other forms of waste. This cutaway shows what happens to the inside of an automobile engine once it is exposed to ordinary motor oil. Sludge in the valve chamber impedes the oil-vapor lubrication of valves, it clogs the oil screen, and it collects inside the oil pipe. Not a pretty picture (but on our pages, it's a pretty illustration indeed). Read the full story in "Lubrication Without Oil".
SHARE

As our archives’ lovingly-illustrated cutaways show, true beauty does lie within, whether you’re a mechanical dinosaur, a Xerox machine, or a World War II aircraft.

While most of our cutaway drawings are of car engines and weaponry, we couldn’t resist including a few whimsical entries, such as our 1926 conception of the future’s electrically-powered home. For all the things we got wrong in the 1920s, we’re proud to say that we were right in illustrating a cutaway that included basement washing machines, electric dishwashers, and curling irons that could be plugged into the wall. A rotating observatory mounted on a merry-go-round track, a 100-pound satellite, and of course, the electric dinosaur round out our more fanciful features.

Then there are the cutaways that tickle our instinct to take things apart. There’s one of the Polaroid Land Model 100, which came with electric components instead of mechanical gears and springs. Meanwhile, a diagram of the General Motors 1951 LeSabre concept car reminds us of everything we have yet to learn about fixing an engine.

But enough words. The real joy in this gallery are the intricate illustrations, so look inside to see them for yourself.

And read our 2011 dissections of How It Works:

This month’s How It Works section is brought to you by Digikey. All posts are purely editorial content, which we are pleased to present with the help of a sponsor; the sponsor has no input in the content itself. 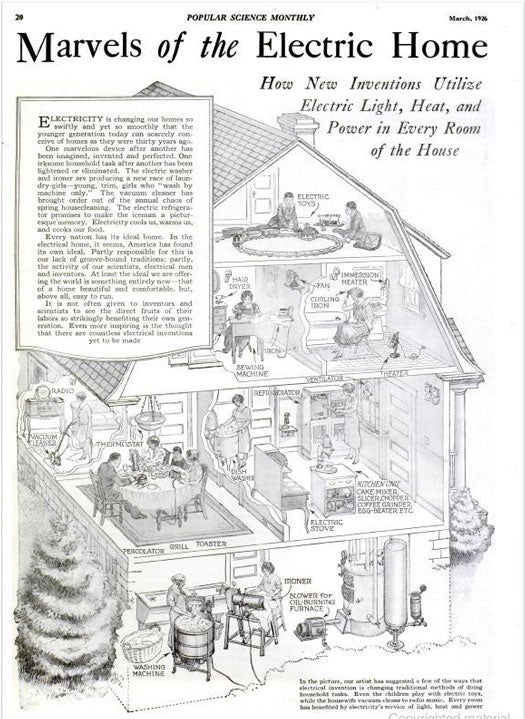 Marvels of the Electric Home: March 1926

By 1926, electricity was well on its way to revolutionizing the way we do household chores. “The electric washer and ironer are producing a new race of laundry-girls,” we said. “Young, trim, girls who ‘wash by machine only.'” What an adjustment! We predicted that within a generation, households would function much like the one depicted in this cutaway. Women would plug irons, sewing machines, hair dryers and curling irons into the wall. Housewives would enjoy radio programs while vacuuming. We’d regulate the temperature using electric fans, thermostats, and heaters. Refrigerators would render iceboxes obsolete. Even the children would be able to play with electric toys. Read the full story in “Marvels of the Electric Home” 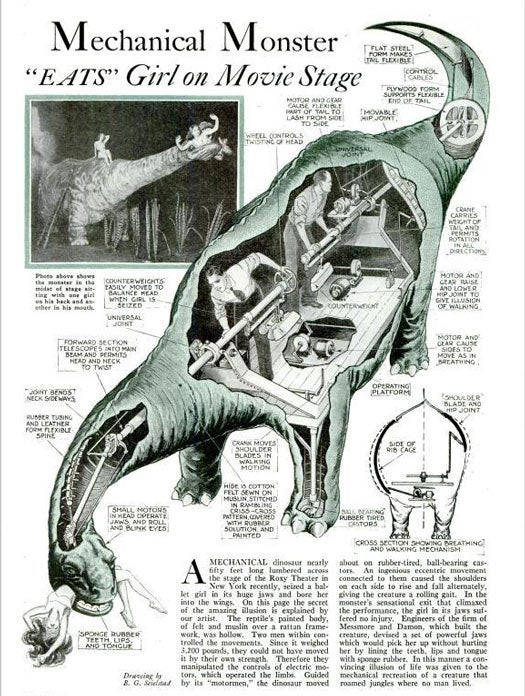 Before there was CGI, there were mechanical monsters powered by electric motors. This dinosaur might not have been real, but grabbing an actress and lifting her several feet in the air is no easy feat. While standing on the operating platform within the dinosaur’s belly, two men would shift counterweights to balance the weight of the dinosaur’s head after it seized the actress. Motors and gears below the counterweights would lift the legs to make it appear as if the dinosaur were walking. Another set of gears attached to a crane would rotate the tail. Even smaller motors allowed the dinosaur to blink and roll its eyes to appear more lifelike. Read the full story in “Mechanical Monster ‘Eats’ Girl on Movie Stage” 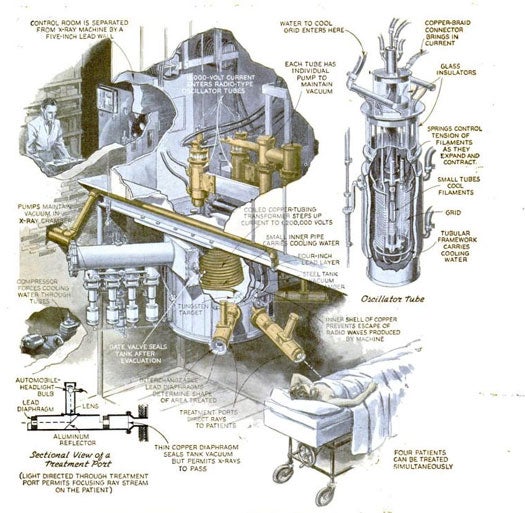 In 1937, the cancer research department at the Presbyterian Hospital in New York City received a mammoth 18,000 pound X-ray machine capable of unleashing 1.2 million volts of X rays onto four patients simultaneously. At the time, researchers were trying to find an effective way to treat patients using radiation therapy. The machine pictured at left was conceived by scientist David H. Sloan and developed by physicist Frank M. Exner and his associates. Unlike conventional X-ray machines, such as the ones in a dental clinic, this one had a vacuum chamber made of steel, lead, and copper. The lead and copper exterior prevented spare X-ray waves from escaping the machine, while a lead disk at the end of the tube would block rays that couldn’t hit the exact spot on a patient. Read the full story in “Giant X-Ray Machines” 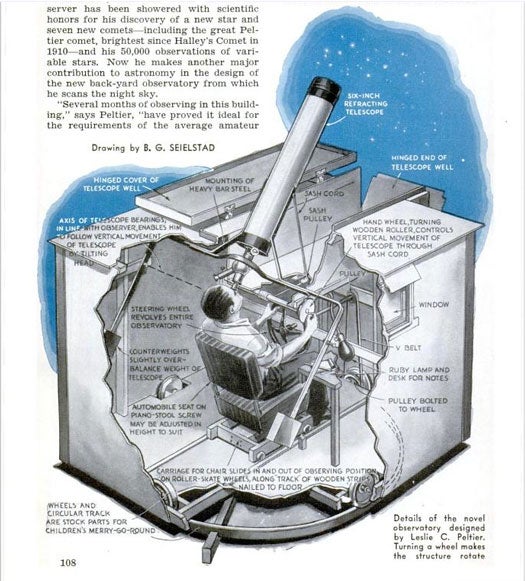 Leslie C. Peltier, described by Harvard’s Dr. Harlow Shapley as the “world’s greatest non-professional astronomer,” gained renown for his novel “merry-go-round observatory.” Peltier mounted a 6-inch, f/8 telescope borrowed from Princeton University onto the tracks of a child’s merry-go-round, which provided an easy means to study the stars from his own backyard. To adjust the direction of his telescope, Peltier simply turned a steering wheel. To adjust the angle, he would turn a small hand wheel. During his time as an astronomer, Peltier found 12 comets, two nave, and made over 130,000 star observations. In his honor, the Astronomical League gifts Leslie C. Peltier award to an amateur astronomer every year. Read the full story in “Merry-Go-Round Observatory” 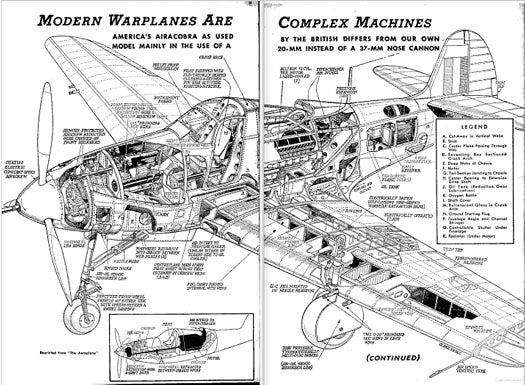 The Bell P-39 Airacobra was complex indeed. Some of its more innovative features included a tricycle undercarriage and an engine located in the center fuselage. This plane was among several weapons profiled in an article we published just three months after the attack on Pearl Harbor. “These are not only instruments of death, but of decision,” we wrote. “From the decision there will be no appeal, and in the clash of these mechanical monsters of sea and land and air there will be no bystanders.” Read the full story in “For the Defense Of – America Attacked”

While most vehicles today use mineral oil-based lubricants, there are manufacturers championing the use of fully synthetic oils, which reportedly perform well in extreme service conditions. Synthetic lubricants become popular between the late 1930s and early 1940s when German scientists started looking for alternatives to their low supply of crude materials. Here, we discussed the perfect synthetic lubricant, which would never have to be changed and would work perfectly regardless of outside temperature. Car gears would work more smoothly since the ideal synthetic oil wouldn’t produce carbon, sludge, or other forms of waste. This cutaway shows what happens to the inside of an automobile engine once it is exposed to ordinary motor oil. Sludge in the valve chamber impedes the oil-vapor lubrication of valves, it clogs the oil screen, and it collects inside the oil pipe. Not a pretty picture (but on our pages, it’s a pretty illustration indeed). Read the full story in “Lubrication Without Oil” 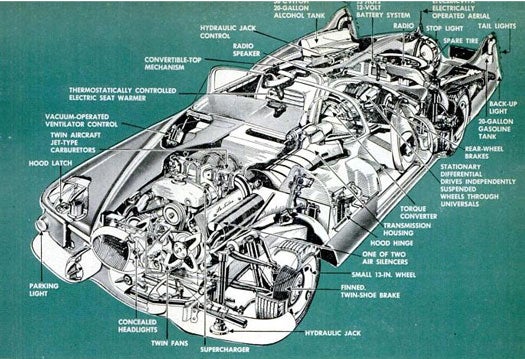 The 1951 General Motors Le Sabre was one of the most prominent concept cars of the 1950s. The aircraft-inspired design is apparent: tail fins, a wrap-around windshield, an airscoop nose, and carburetors resembling those of aircraft jets all gave the car a sleek, futuristic appearance. Special features included a thermostatically controlled electric seat warmer and a rain-sensitive switch that would automatically activate the top. Read the full story in “GM Builds 300-Hp. Preview Car” 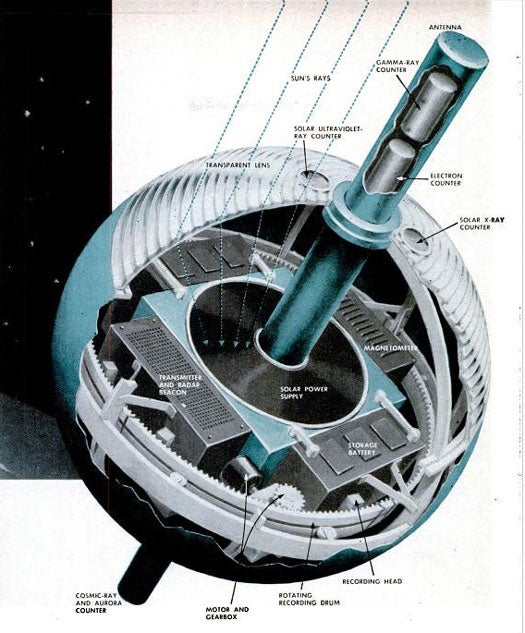 University of Maryland physicist Fred S. Singer proposed sending a 100-pound satellite equipped with research instruments into the earth’s atmosphere. The MOUSE (Minimum Orbital Unmanned Satellite of the Earth), also known as the “midget moon” and the “poor man’s satellite,” would hover 200 miles above earth. MOUSE wouldn’t make any interplanetary missions, but it would collect information about the upper atmosphere, conditions for long-range radio communications, and about the sun’s radiation. A three-stage rocket costing $1 million would launch MOUSE into orbit, where it would circle the North and South pole once every 90 minutes. Read the full story in “Poor Man’s Space Station” 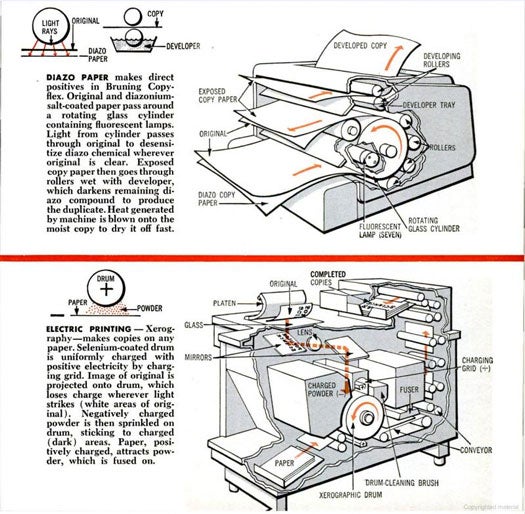 Since offices started using Xerox copiers only 1959, doing a short series on photocopiers seemed fitting a year afterward, when we’d begun to transition from mimeograph machines, carbon papers and other imminently obsolete machines. The cutaway on top shows white-print, which used the diazo chemical process to reproduce documents. The one on the bottom depicts a conventional Xerox machine, which uses negatively charged powder to print letters on positively charged paper. Read the full story in “How Copying Machines Work” 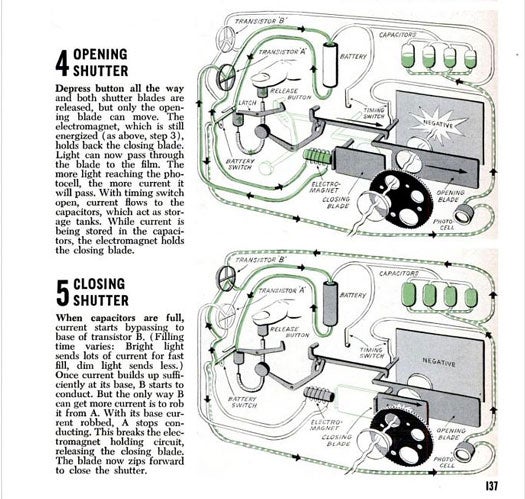 The Polaroid Automatic Land Camera Model 100 debuted in 1963. We were delighted with its transistorized electronic shutter, and that electronic parks replaced the mechanical springs and gears of regular shutter systems. Conveniently enough, an automatic exposure worked by calculating the flash lightning reflected on the walls and ceiling. It also used a film-pack system instead of roll film. Read the full story in “Polaroid’s Can’t-Miss Electronic Camera”
archive gallery
archives
future then
how it works 2011
Popsci Archive