Meanwhile, jet contrails found to be a worse climate-change culprit than carbon 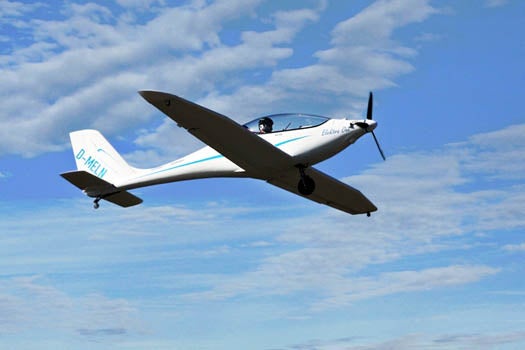 German company PC-Aero is trying to win NASA’s CAFE Green Flight Challenge, and Saturday they took a big step toward doing just that. The company’s Elektra One aircraft, designed by PC-Aero’s founder and president Calin Gologan, made its successful first flight. But this one-seater isn’t your average single-prop. Elektra One flies on electricity alone.

The Green Flight Challenge seeks a demo aircraft that can fly 200 miles in less than two hours on the energy equivalent of less than one gallon of fuel per person. Elektra One didn’t push the envelope that far just yet–the maiden flight hit a ceiling just above 1600 feet and lasted just 30 minutes, burning just half the 6 kWh stored up in its batteries. But the fact that the lightweight aircraft was able to comfortably circle the airfield for half an hour– more or less silently, we might add–is nothing short of impressive.

And the timing for such a flight couldn’t be better. A study released Tuesday claims that airplane contrails–those long, white condensation trails jets leave in the sky–may warm the planet more on the average day than all of the carbon emissions spewed from airplanes in the history of modern aviation.

The carbon lingers longer of course–the contrails and any heat-trapping cirrus clouds they cause dissipate in hours or days, while the carbon remains for decades–but still, that’s a lot heat being trapped on any given day. Electric planes, as you may have surmised, wouldn’t contribute to warming on either front. See Elektra One take flight in the video below.