Build Your Own DARwIn-OP, the Open-Source Humanoid Robot 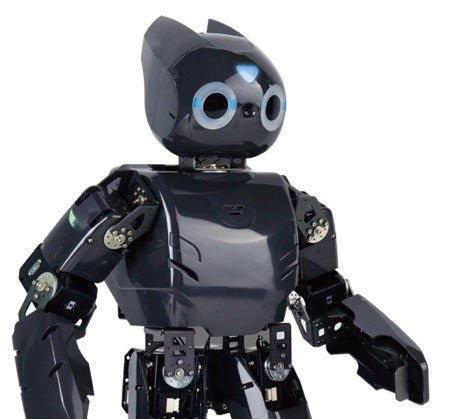 Meet DARwIn-OP, America’s newest humanoid robot, unveiled this week at IEEE’s Humanoids 2010 conference. He is 18 inches tall, weighs 6 pounds and is ready to be messed with. It’s OK, he’s an open-source bot.

Designed by Dennis Hong’s RoMeLa team at Virginia Tech with collaborators at University of Pennsylvania’s Grasp Lab, Purdue University, and Korean company Robotis, DARwIn-OP’s hardware and software are open-source — you can fabricate the parts, choose your own electronics and build one of your own. And why wouldn’t you? There’s something so cute about his Astroboy fins.

In the video below, he claps his hands as Hong provides a somewhat breathless introduction, and is undaunted when Hong kicks him over. He kicks a red ball and falls on his face when Hong removes it.

About 10 DARwIn-OP units were making the rounds at IEEE this week, and afterward will be distributed to the partner universities. If you don’t work in a robotics lab and don’t have access to a CAD system, Robotis will build one for you, to the tune of $12,000 ($9,600 with an educational discount).