When we last looked in on holographic telepresence tech, a University of Arizona team was impressively streaming near-real-time three-dimensional moving... 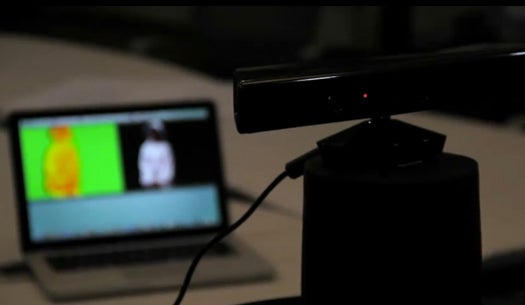 When we last looked in on holographic telepresence tech, a University of Arizona team was impressively streaming near-real-time three-dimensional moving images, offering a glimpse of what telepresence could be once researchers iron out the wrinkles. Now, an MIT team is showing off a simplified scheme for streaming holographic video, using a single Xbox Kinect peripheral and standard graphics chips to create the fastest holographic video yet.

There are two significant points to be made up front about the MIT group’s Kinect-based holographic TV project. First, where the Arizona team’s holographic display could refresh once every two seconds, MIT’s scheme is capable of 15 frames per second—close to the 24 fps required for feature films and the 30 fps necessary for television—so its just shy of creating real time holograms that create the illusion of continuous motion.

Moreover, and perhaps more significantly, pretty much all the components for MIT’s setup are off-the-shelf. That means holographic telepresence and holographic entertainment may not be too terribly far from reality.

The researchers managed all this by tapping what are known as diffraction fringes to create an object’s 3-D shape. When light bounces off of an object, it does so at an infinite number of angles. The MIT team had to create a system that could capture the light intensity of image pixels and their distances from the camera—information that is used to create a diffraction fringe pattern that can bend light in predictable ways—and transmit that data live.

Once the data is transmitted to a computer at the receiving end, a PC with three commercial graphics processing units computes that data into diffraction patterns, which in turn can recreate the image as a hologram that the viewer can view in true 3-D. That is, the viewer can walk around the object and view it from different perspectives. Such live-streaming of holograms doesn’t just bring Preincess Leia-like holographic telepresensce a big step closer, but opens the door to holographic television—technology that could bring entertainment into living rooms in a way that surpasses even the best 3-D televisions.

The one component of MIT’s system that can’t be purchased off-the-shelf at an electronics store is the holographic projector itself, which has been under development at MIT for decades and continues to improve. If researchers there can squeeze a few more frames per second out of their GPU/software setup, that display could fairly easily bring holographic video into the mainstream.

See the system in action in the video below. Unfortunately, the 3-D effect doesn’t convert well to 2-D video, so without actually being there the hologram looks more like a blur, a fact that’s more than made up for by the Princess-Leia-on- Alderaan costuming.