The flooding in California won’t end its three-year drought

We’ll have to wait and see

Downpours in California raised water levels in reservoirs so high that flood control gates were opened in numerous areas across the state, including here on the Sacramento River. James Daisa/Flickr
SHARE

California is usually drenched with sunlight. But this week, it’s just drenched. A series of storms have pummeled the state, dropping staggering quantities of rain and snow—leading to flooding, mudslides, and a whole lot of water pouring into reservoirs that were just about dried out. But is it enough to end the state’s persistent drought?

That depends on a lot of factors, including whether the current wet spell continues through until April—the traditional end of the wet season in California. It also depends on when Californian officials feels comfortable enough with the water supply to lift the current Drought State of Emergency, which will turn three years old later this month.

In 2014 Governor Jerry Brown issued a State of Emergency related to the drought. The state began planning a massive conservation campaign and directed resources to cover water shortfalls in drier parts of the state. When conditions get wet enough that water supplies are less of a concern and the state decides to lift the state of emergency, the prolonged period of drought will have reached it’s end. And these storms are certainly helping the state get there by re-building the snowpack that supplies water in the spring, and re-filling reservoirs and rivers that dried under the hot California sun during previous summers. But no one knows whether or not these wet conditions will persist long enough to formally end the drought.

“Rainfall will definitely help, but if this is the last storm this winter, it also doesn’t do us any good,” says UC Davis hydrologist Helen Dahlke. California’s highly variable climate means that whatever water builds up in the winter will have to last through all of the summer, and it’s still too early to tell whether or not future storms will materialize.

“I think things are about on track to be as good as they can be right now,” says Alan Haynes, a hydrologist with the National Weather Service’s California Nevada River Forecast Center. “If we keep building the snowpack, we’ll be in good shape. But, we will run into drought again. We will have dry years, and if we have enough of them strung together there won’t be enough water to go around. It’s a continual problem, but for this year, I’m optimistic.”

The storms hitting California aren’t particularly unusual in and of themselves. A storm system hit last year, too. California gets the vast majority of its precipitation between October and April, the wet season driven in by ribbons of moisture-laden air known as atmospheric rivers that flow over the Pacific until they hit the West coast. 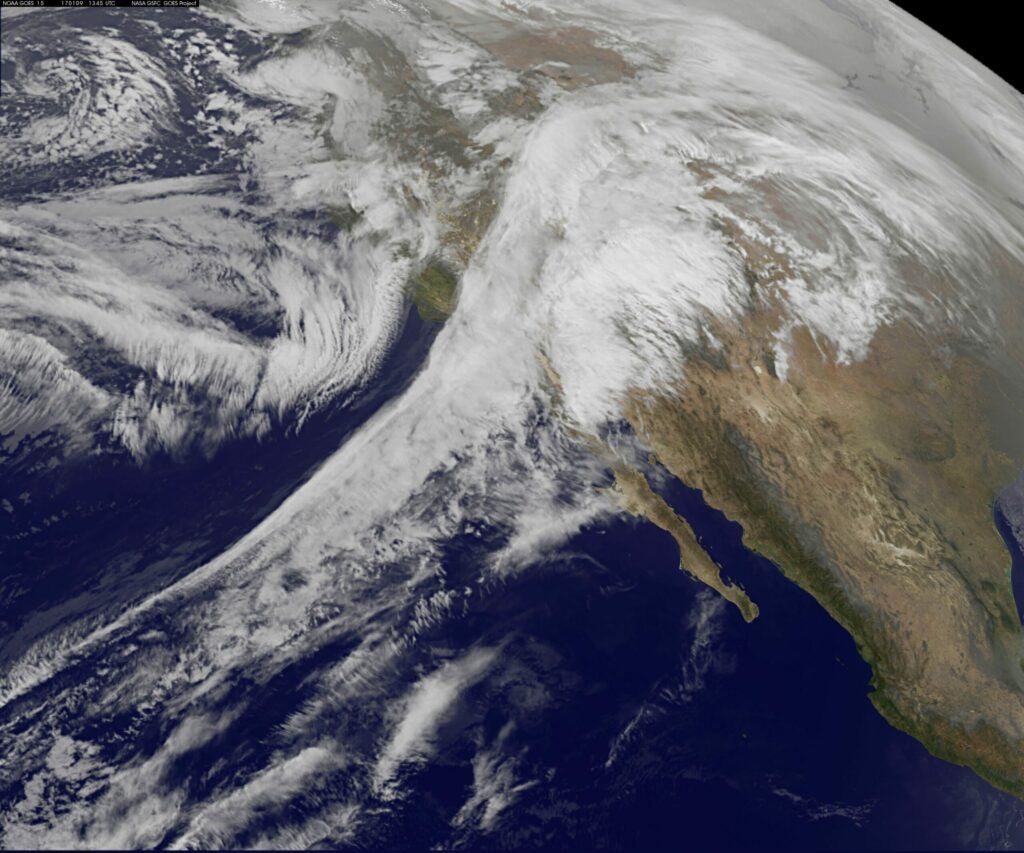 A joint project between NASA and NOAA managed to take this gorgeous pictures of storms hitting California.

And although this year’s storms are intense and seemingly unceasing, they are not hitting all parts of the state equally. California State Climatologist Michael Anderson says that some northern regions of the state have gotten around 10-19 inches of precipitation over the past week—that’s the downpour responsible for downing massive trees and causing floods. But California is a big state, and this isn’t a one-size-fits-all storm complex. “As you head south into Santa Barbara it drops off spectacularly, going all the way down to 1-3 inches,” Anderson says. “Areas up north are dealing with an entirely different storyline than areas down south.”

In the north, reservoirs are so full that officials are literally opening the floodgates, sending water rushing out onto the floodplains in an effort to make way for any additional storms that might come in the winter. The rains have added about 350 billion gallons of water to reservoirs, many of which have surpassed their historical average.

While these storms—and the preceding years of drought—might be among the most tenacious in recent memory, this cycle of boom and bust is fairly normal for California’s highly variable climate if you look at longterm historical records. Wet and dry spells are common within a year, and cycles of long drought followed or punctuated by large flooding events aren’t uncommon.

“In the longer term, we’ve had periods of drought that have lasted for over a century” B. Lynn Ingram—a paleoclimatologist and author of The West without Water—says, pointing to a drought in the area that lasted from about 900-1400 AD. “Typically every century, there are one or two droughts that are maybe a decade long.”

Sounds like a 5-6 year drought is pretty good in that context. But Ingram also notes that while serious drought has been affecting California for the past five or six years, 12 of the last 14 years for which we have records have had below-average runoff in California, sparking fears that we might be entering a more extended dry spell.

The large storms are not without precedent either. “There was a big flood in the Western states in 1861 and 1862,” Ingram says. “A series of these atmospheric river storms that lasted for 43 days. It completely inundated the state. Something like a third of the state was underwater including the entire central valley.”

While such a huge event hasn’t been seen since, in looking back at the geologic record, Ingram says that the evidence for these huge flooding events occurs roughly every 200 years.

California will need to keep having some winter storms this season in order to stay on track for an end to the current drought, but we’ll all hope that in the next few months the storms will be just enough to fill the reservoirs—and not enough to fill the valleys.