Amazon Prime drones may have a challenger 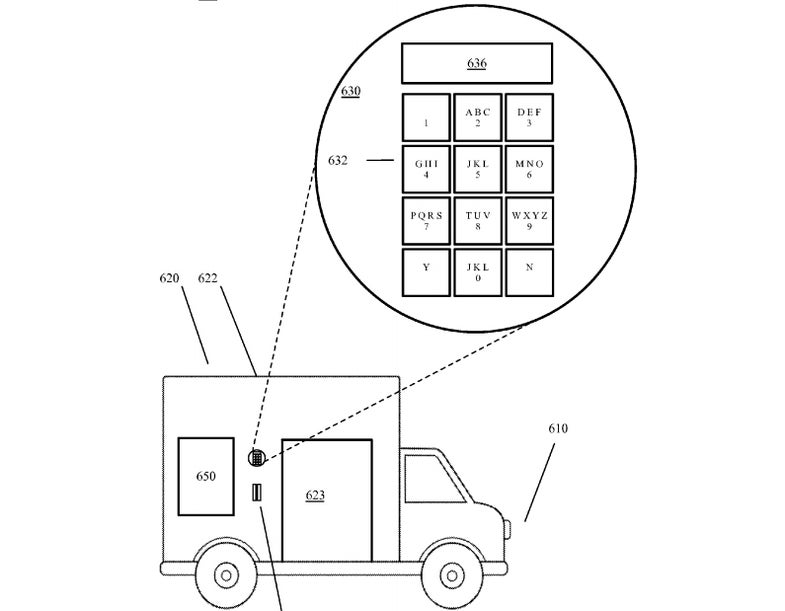 We were so busy looking at the sky, we forgot to notice the changes happening on the ground. As automation improves, and as sensors get better and people get more comfortable trusting the autonomy of machines, the biggest change to delivery may not be flying unmanned robots, it will be smart package-carrying vans.

As discovered by Mike Murphy of Quartz, the patent filed yesterday is for a truck with a bunch of lockers on its back, each with a unique identifier. The car drives to the delivery location, and then the customer presumably goes out, finds his or her locker, and unlocks it with a pin code. Then the truck continues on autonomously, delivering more packages to more people.

This is roughly similar to the drone delivery concepts developed by both Amazon and Google, which envision flying robots dropping off a single package at a time, before returning to a central warehouse. Those plans are as cool to think about as they are likely to face legal tangles regarding airspace usage and pilot line-of-sight.

One appealing alternative by a company called Workhorse takes the drone delivery concept, and puts it on a truck. With Workhorse, the truck drives to a neighborhood, parks, and then the drone (dubbed “Horsefly”) goes about delivering packages, hitching a ride back on the truck when it’s done.

Google’s new patent eliminates the drone entirely, and the human driver too. Building on Google’s expertise with driverless cars, the truck itself is the delivery mechanism, relying on people to get out of their homes to retrieve packages. Slick, but not without risk: the liability issues behind driverless cars are potentially huge. If the folks at Google go ahead with this patent, maybe they should take some time to read up on robot law.

Update February 11, 2016 The name of Workhorse was originally misstated. It has since been corrected.