Apollo 12’S Was A Launch With Lunches And Lightning Strikes

Forty-five years ago today, the second lunar landing mission, Apollo 12, launched from Cape Kennedy for the Moon’s Ocean of... 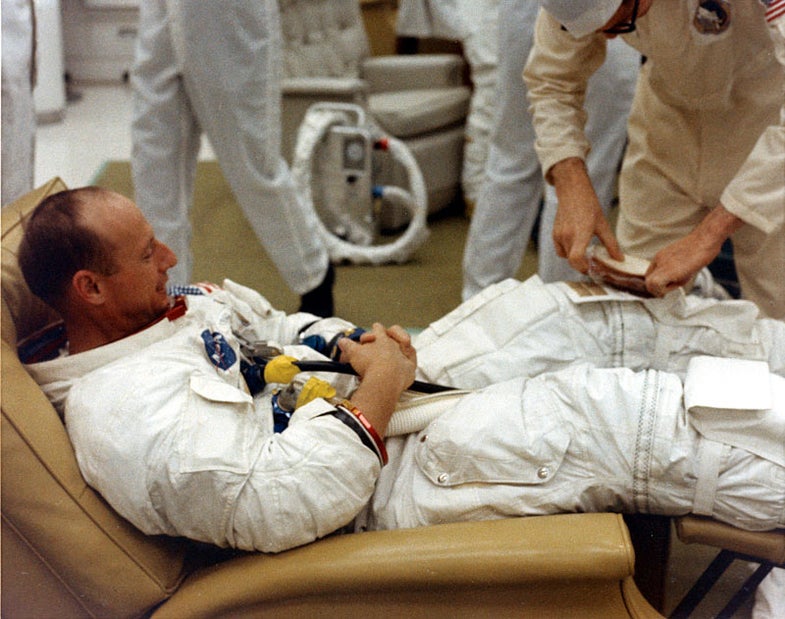 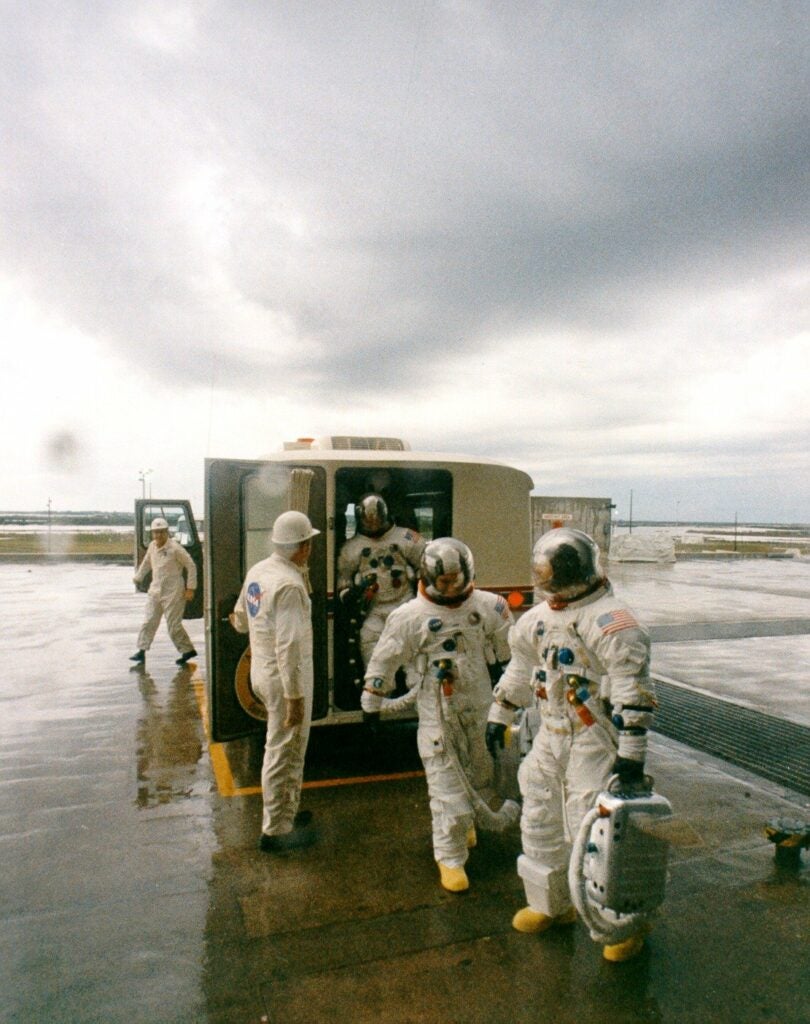 Transferring to the pad under stormy skies.

Forty-five years ago today, the second lunar landing mission, Apollo 12, launched from Cape Kennedy for the Moon’s Ocean of Storms. Between sandwiches and lightning strikes, it was a pretty exciting launch day.

The morning of November 14, 1969, started early for the crew of Apollo 12. Commander Pete Conrad, Command Module Pilot Dick Gordon, and Lunar Module Pilot Al Bean were roused before sunrise and by 7am were tucking into the traditional pre-launch breakfast of orange juice, toast, steak, eggs, and coffee.

After breakfast, the crew went to don their pressure suits. It was a complex procedure involving diapers, biosensors, long johns, the soft “snoopy hat” communications helmet, and a spacesuit weighing up to 55 pounds. With the suit on, astronauts had a sufficiently hard time bending at the waist that they spent the remainder of the suit up process supine in easy chairs. At one point, the technician assisting Conrad slipped a sandwich into his leg pocket, and the other two crew members likely got the same last minute snack pack. The astronauts’ gloves were snapped into place and their helmets locked on, beginning their period of pre-breathing pure oxygen to purge their blood of nitrogen.

All the while the weather deteriorated steadily as a storm moved in over the Cape. The crew rode through the rain in the transfer van out onto the launch pad. Once settled inside the spacecraft, Conrad could see rain dripping down over the Command Module window underneath the boost protective cover. But no one was concerned enough about the weather to cancel the launch. Not to mention President Nixon was on hand, the first time a sitting president was ever in attendance at an Apollo launch.

The countdown pressed on. At T-8.9 seconds, the ignition sequence started. The five F-1 first stage engines fired in sequence –one to start, two more 300 milliseconds later, and the final two another 300 milliseconds after that. The massive rocket lifted off the launch pad at 11:22 that morning, turning the night-dark stormy day momentarily bright.

Conrad: Clear the tower. I got a pitch and a roll program, and this baby’s really going.

Gordon: Man, is it ever.

Conrad: It’s a lovely lift-off. It’s not bad at all.

Then, at the 37-second mark, the great-looking launch went to hell.

Gordon: What the hell was that?

Gordon: I lost a whole bunch of stuff; I don’t know …

Conrad: Turn off the buses.

Conrad: Roger. We had a whole bunch of buses drop out.

Conrad: Roger. We [garble] on that.

Conrad: Where are we going?

Conrad:     I just lost the platform.

Conrad:     Okay, we just lost the platform, gang. I don’t know what happened here; we had everything in the world drop out.

Conrad:     Maybe it’s just the indicator. What do you got on the main bus? 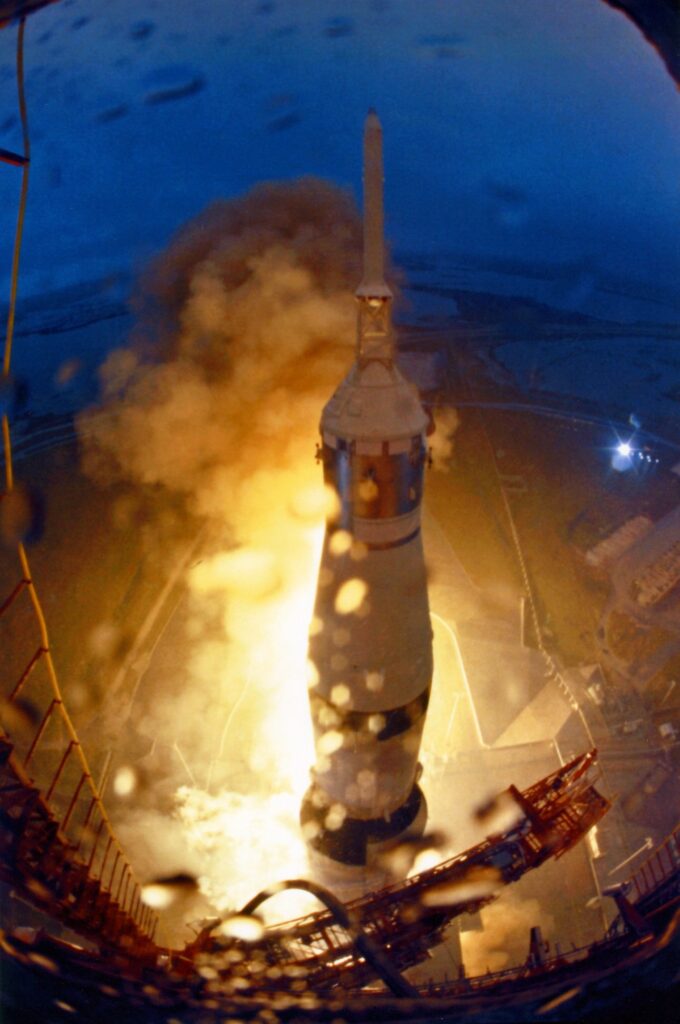 No one seemed to know what was going on. No one except John Aaron, the 24-year-old EECOM. When the panel lit up aboard Apollo 12, the data on Aaron’s console turned to gibberish, but it was familiar gibberish. He’d seen the same nonesense data during a simulation. In that instance, a test conductor had accidentally dropped the spacecraft’s power system to low voltages. It turned out that the low voltage had upset the signal conditioning equipment, a box of electronics responsible for translating information from onboard sensors into the signals that fed the displays in the spacecraft and on the ground. In the normal setting the SCE box needed high voltage to run properly, otherwise it would shut down. But it would continue to function just fine in the auxiliary position, even in a low voltage situation.

The familiar gibberish on his console triggered this memory in Aaron’s mind, and he knew that switching SCE into the auxiliary position would bring everything back online. So he passed the command to Flight Director Gerry Griffin, who passed it to Capcom Jerry Carr.

Conrad:     Try FCE to Auxiliary. What the hell is that?

Conrad:     Try the buses. Get the buses back on the line.

Conrad:     Roger. Go for staging we had some really big glitch, gang?

Two minutes later, with the spacecraft recovered, the crew was laughing about it.

Carr:     We’ve had a couple of cardiac arrests down here, too, Pete.

Gordon:     That was something else. I never saw so many…

Gordon:     …There were so many lights up there, I couldn’t even read them all.

Conrad:     Everything looked great [laughter] except we had all the lights on… 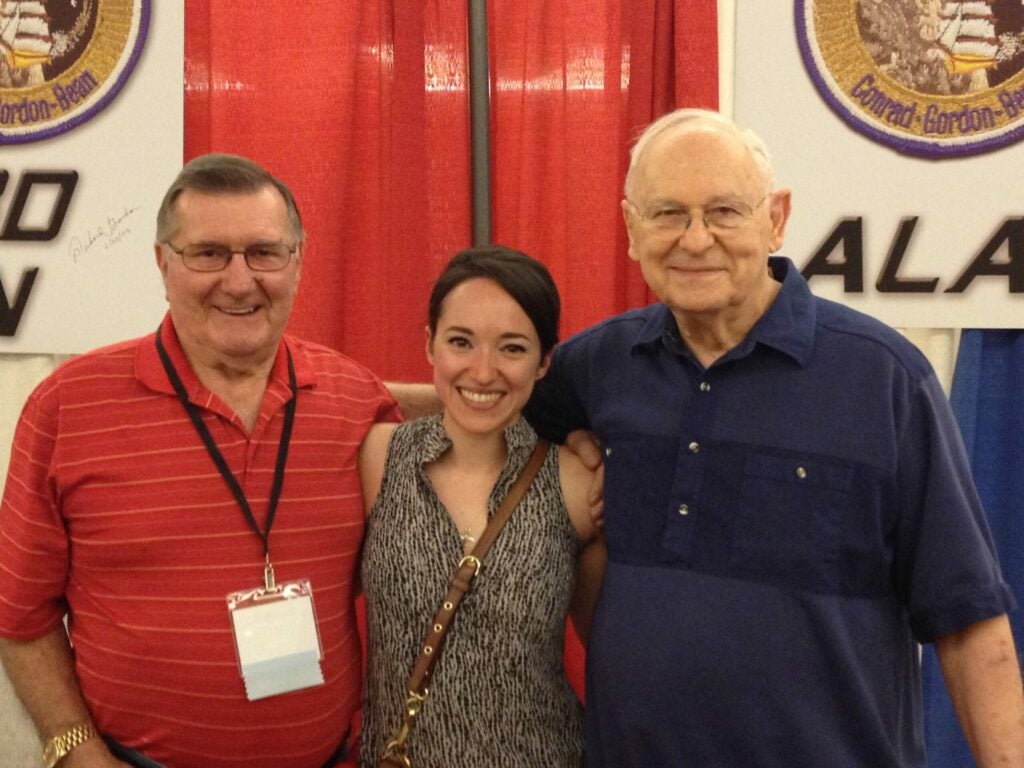 Me and the surviving Apollo 12 crew

And that is why you’ll see space geeks wearing shirts reading “SCE to AUX” at conferences.

With systems coming back online, the crew got everything squared away and continued on through the mission’s orbital phase. And everything was fine; they checked for damage from the lightning strike but found nothing, and the crew was given a GO for translunar injection burn, the burn that would propel the spacecraft out of Earth orbit and on a course for the Moon.

This TLI burn came two hours and 53 minutes after launch. Forty minutes later, the crew had recovered their lunar module from its stowed position in the S-IVB upper stage. Another two hours later, about five hours into the mission, the crew stopped and had a brief snack. It sounds, from the transcript, like they ate the sandwiches the suit technicians had packed in their pockets earlier that morning.

Bean: I snickered at those ham sandwiches this morning, but I take it all back. They’re delicious.

Bean: Our compliments to the chef.

Carr: Roger. He’ll be glad to hear that.

Carr: Did you break out the jelly beans yet?

Conrad: No, we’re still reminiscing about that launch. We was wondering why we were supposed to try SCE to Aux. We haven’t figured that one out yet.

The lightning strike was far from the most exciting moment on Apollo 12’s mission. It was both an interesting and entertaining flight, and you can relive it in real time (plus 45 years)! I’m live tweeting the mission beginning with launch this morning at 11:22am EST to mark the 45th anniversary. Follow me, @astVintageSpace, for the play by play updates marked with the hashtag #Apollo12. And be warned: there will be a lot of tweets and some cat pictures involved in this one.

Sources: The Apollo Lunar Surface Journal; “Apollo 12 on the Ocean of Storms” by David M. Harland. And here’s a long blog post from a couple of years ago that goes into all the details about Apollo 12’s electrifying launch.