Can You Guess What These Cute Pink Tiles Are Made Of?

These images are from research into new techniques for medical diagnoses and biometrics. 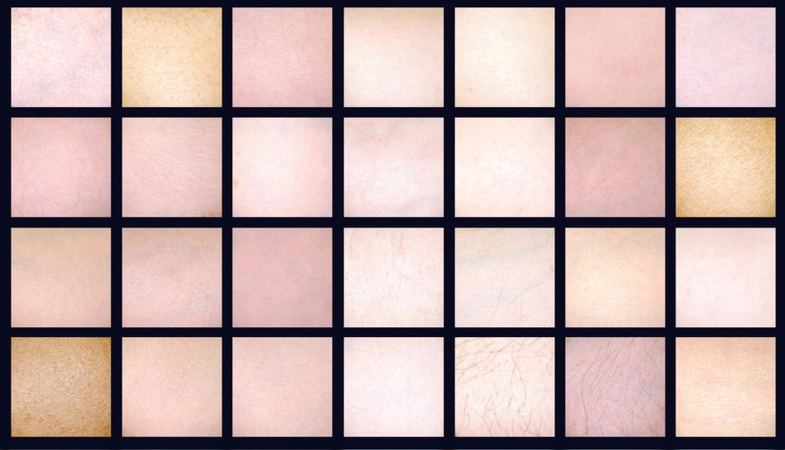 These are some nice color swatches, don’t you think? I can just imagine them as decorative bathroom tiles. But what if I told you these are samples of people’s skin? They are! The top set is a series of photos of the skin from the inside of different people’s forearms. The bottom set are images of the same people’s skin, but the images were enhanced with techniques researchers are developing for medical diagnoses and biometric applications.

You might notice that while it’s difficult to tell many of the photos in the top set apart, they’re much more varied in the bottom set. That’s because different people’s skin reflects electromagnetic waves differently. The human eye can only see the narrow band of electromagnetic waves in the visible light range. The reflectance processing technique takes advantage of waves that aren’t visible to the naked eye, from infrared light to ultraviolet light.

Because the enhanced images are so different from one another, researchers hope they might be used to identify people in the future. Imagine a face or fingerprint reader that takes into account not only your features, but also your skin tone, as measured by a wide range of light. In addition, some research groups are hoping to develop skin-imaging techniques that will tell doctors more about a person’s health. Certain wavelengths of light could show how well skin is healing around a wound, for example.

Before researchers can put these applications to work, however, they have some basics to figure out. The images above come from an effort at the U.S. National Institute of Standards and Technology to determine the best wavelengths of light to use for telling people apart by their skin. The researchers also wanted to check that the differences between people’s skin were greater than the error bars of the instruments they used to measure skin reflectance. Their sample size was small—28 people—and not exactly random. (They appear to have simply nabbed people walking down the hall at NIST.) With this preliminary data, however, they determined the differences between individuals really are greater than instrument error, and the results suggest that visible and near-infrared wavelengths may be best for identification purposes.

The researchers wrote a paper about their work and presented it last month at a conference hosted by the International Society for Optics and Photonics.