How To Predict A Lifetime Of Diseases

A new data-mining project analyzes Danish health records to chart the trajectory of diseases throughout a life. 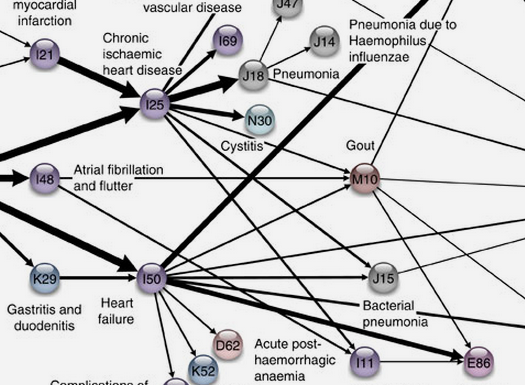 Doctors have long suspected that those who have heart disease also tend to get gout. Knowing correlations like this is important for predicting and preparing for what will happen to patients in the future. The correlations are also important for understanding how diseases work. Is there a mechanism behind gout that’s related to heart disease? Could medicines for gout help with heart disease, too?

Okay, so we know one disease sometimes leads to another, even if they’re seemingly unrelated. (Gout is a kind of arthritis; it’s not immediately clear it has anything to do with the heart.) But one new study has examined these correlations at an unprecedented scale. Researchers from Denmark and the University of New Mexico recently mined the Danish National Patient Registry for diseases that often follow one another. And what exactly is the Danish National Patient Registry? It’s a list of every single time a Danish person visited a Danish hospital. The researchers examined data from 1996 to 2010, encompassing 6.2 million people and 65 million hospital visits.

The scientists found some distinctive patterns. Some were obvious. Many patients were diagnosed with an enlarged prostate, then prostate cancer, then obstructed urine flow, and finally, anemia related to cancer. That doesn’t mean all people who have an enlarged prostate—who find themselves at the starting line—will go through this progression. The study didn’t specify people’s risk of going through the progression, either. But the results do mean that this is an established medical journey, one that happens to a statistically significant number of people among 6.2 million Danes. To think of it another way: Not many people find themselves diagnosed with obstructed urine flow before being diagnosed with prostate cancer. The progression happens one way. 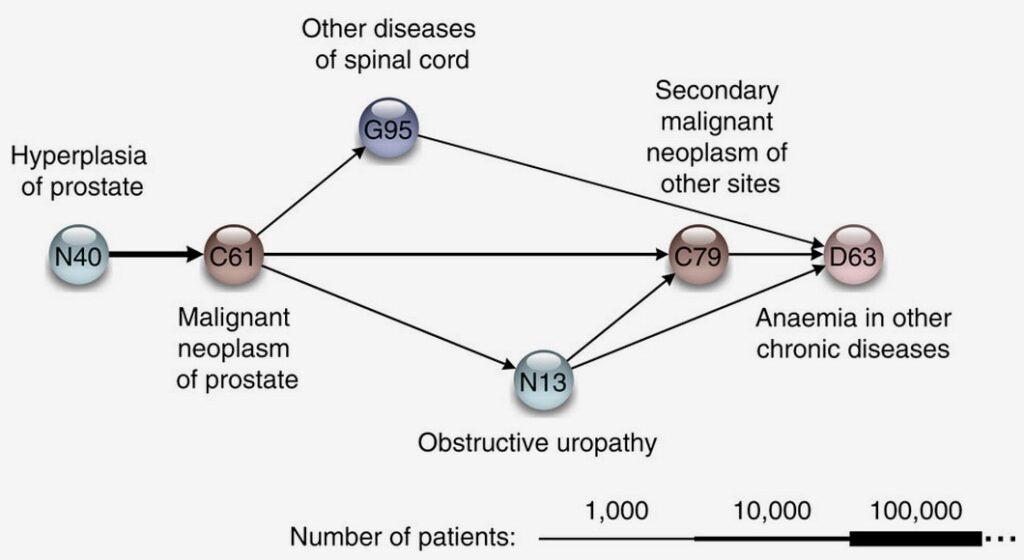 Trajectories for an Enlarged Prostate

The more interesting patterns were the less straightforward ones. The researchers found there’s a pathway where people get chronic obstructive pulmonary disease after being diagnosed with hardened arteries. After that, people tend to progress rapidly to one of several more serious diagnoses. Many in the study died within five years of their COPD diagnosis. These data are a signal that COPD is a dangerous milestone in a cardiovascular disease patient’s health timeline.

Mining a big dataset for timelines helps clarify relationships between diseases, the researchers wrote in a paper they published in the journal Nature Communications. In the future, progression patterns could help personalize people’s prognoses. Your prognosis might be different if you get gout after heart disease, than if you didn’t. “In the future, we will be able to predict many diseases using simple tests in combination with known disease progression patterns,” the study’s lead scientist, Søren Brunak of the Technical University of Denmark, said in a statement.