We May One Day Go Viral For That Perfect Smile

A healthy mouth is obsession in America and people are willing to spend to get it. In a 2009 report... 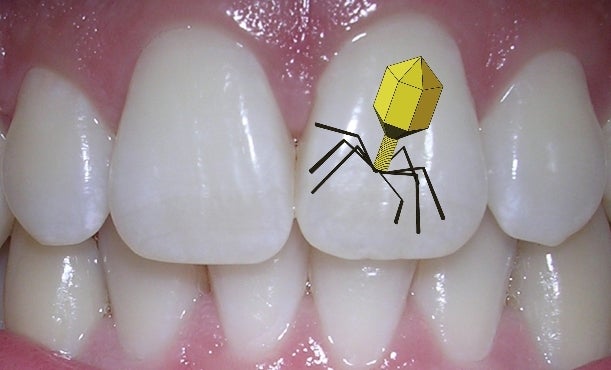 A healthy mouth is obsession in America and people are willing to spend to get it. In a 2009 report on oral health suggested close to 11 billion dollars will be spent on keeping those pearly whites bright. Yet there may be a less expensive route to help maintain dental hygiene across the globe requiring significantly less bureaucratic effort. If it takes off, it may one day be all the phage.

Bacteriophages are well-known viruses of bacteria although their enigmatic nature has kept them on the fringes of health research. Back in 1917, they were thought to be a powerful medical weapon against bacterial infection yet they never gained popularity, stymied in part by the development of antibiotics. But the fascination with these phages continued away from the public spotlight and research continued on unabated. Now thanks to some excellent work on the part of these silent microbiological heroes, the use of phages may one day help to keep every mouth free of periodontal disease.

The research began back in the 1960s when certain phages in the mouth were shown to target and kill a variety of Enterococcus bacteria known to cause not oral diseases but rather gastrointestinal infection and potentially endocarditis. At the time, the goal was to use phages for identification of oral strains of enterococcal bacteria yet the potential to use them as antimicrobial weapons was apparent.

By the 1970s, phages were considered to control epidemic bacterial outbreaks such as cholera. There was increasing interest in the use of phages in oral health although it was still very early to actually make waves. Ten years later, even as more oral-based phages were found, there was little to suggest these small viruses could possibly help to improve health. After the turn of the millennium, tests were being performed to look for those viruses, though no conclusive directions forward were realized.

Then, in 2010, the page turned with the discovery of a phage specific for a bacterium known to cause gum disease, Fusobacterium nucleatum. The identification helped to set off a new direction in oral phage research, complemented by the interest in learning about the human oral virome and its involvement in disease.

In 2012, an American collaboration of researchers took a closer look inside the mouth and found close to 100 million phages per milliliter of saliva. To suggest there was no biological function was no longer an option; the viruses were there and doing something. Unfortunately, there were still no hard answers to determine what those functions were. But last week, a Californian team of researchers including one of the authors from the 2012 study unveiled some of the mystery behind the contribution of the oral virome to health. The group looked at the saliva as well as the supra- and sub-gingival plaque of 16 volunteers. But in this study, half of them had periodontal disease. The hope was to identify a difference in the nature of the oral virome. The results provided more than they expected.

While there were similarities in the nature of the two different populations of viromes, particularly in the saliva, there were two significant differences identified. Those with disease had more myoviruses in the subgingival region and less in the saliva. As these viruses are lytic in nature – they kill bacteria outright – they were thought to drive bacterial diversity in the mouth. The data therefore suggested those with disease have a less varied microbiome in that region, potentially leading to disease.

The other difference was seen in the amount of siphoviruses; they were reduced under the gums. These viruses are lysogenic in which they live in a dynamic relationship with bacteria and are found when there is harmony in the microenvironment. In the context of this study, their reduced numbers in diseased individuals suggested an unwelcome environment in which the bacteria were continually stressed or quite simply, not present. This dysbiosis could potentially lead to inflammation and possibly lead to recession of human tissue.

The overall conclusion of this study offers two directions forward. First, they demonstrate a means by which to identify periodontal disease through analysis of the virobiota. They also offer opportunities to use viruses in order to improve oral health. Bacteriophages are known to be drivers of bacterial population changes and they have the potential to fix dysbiosis through their use. Granted, the results of this study do not offer any concrete path to follow yet future research has a strong base upon which it can build.

With further studies to determine which viruses are most important in health and disease, treatments may be possible in the future to shift the bacterial communities to a more harmonized state. Eventually, there may be no longer a need for the billions spent on oral health. All that may be required is a regular swish of phages to keep a smile lasting for a lifetime.