But a small stretch of ocean is still a lot of ocean. 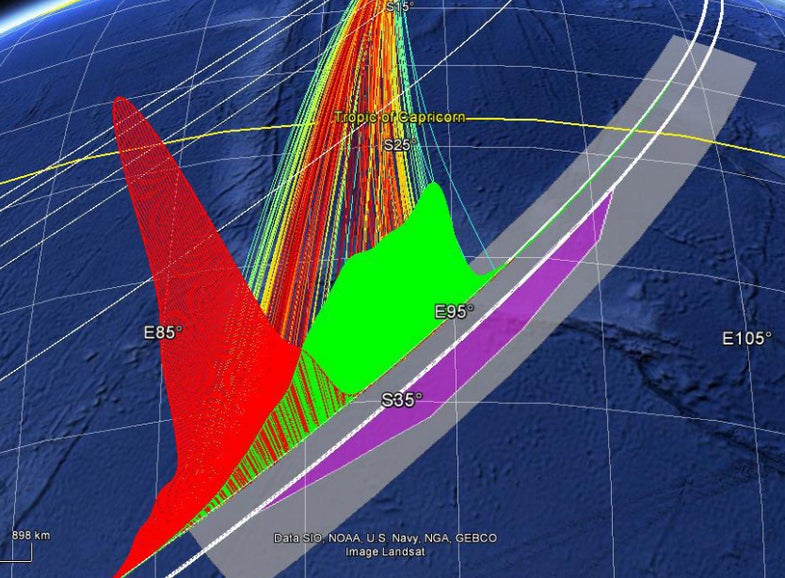 In March, Malaysian Airlines Flight 370 from Kuala Lumpur to Beijing disappeared over the ocean. Despite international attention and search efforts, the plane was never recovered. On Wednesday, the Australian Transport Safety Board published a report that narrows the slice of sea where it’s likely the plane crashed. The ocean is still vast and deep enough to hide a plane, but there’s a good chance the wreckage of MH-370 is lurking in a 400-mile stretch of ocean floor.

They mystery of the plane is compounded by the lack of information that normally comes from a crash. After MH-17 was shot down over Ukraine, for example, investigators were able to examine the actual crash and collect information about the flight stored on crash-proof recorders. These recorders are commonly known as black boxes, despite their bright orange color that makes them easy to find. Unfortunately for those seeking answers about MH-370, the sea hides information much better than the land. Future plane designs could make it easier to find ocean crashes, but future preparedness can’t find a plane already lost.

Instead of examining data and wreckage to establish a cause of the crash, investigators looked at the various signals sent to and from the plane to try and discern its location. Radio communications, radar scans, and telephone calls from the cockpit (and unreturned calls from ground control) all inform a larger picture. While communication with the pilots ended early into the flight, automated communications from the plane continued over the next few hours. The last successful contact between the aircraft and traffic control happened at 8:19 am Malaysian time, and ground control had an unsuccessful attempt to contact that plane at 9:15 am.

With this hard point, the investigators ran scenarios for autopilot flight patterns, human error, and possible altitudes and speeds before the crash. Operating from an assumption that the plane turned south into the Indian Ocean after flying over the Strait of Malacca, the report identifies a 350 nautical mile (400 statute mile) stretch of ocean as the most likely final resting place of MH-370. It’s this part of the ocean that underwater searchers should look next.