A former FAA and NTSB accident investigator weighs in 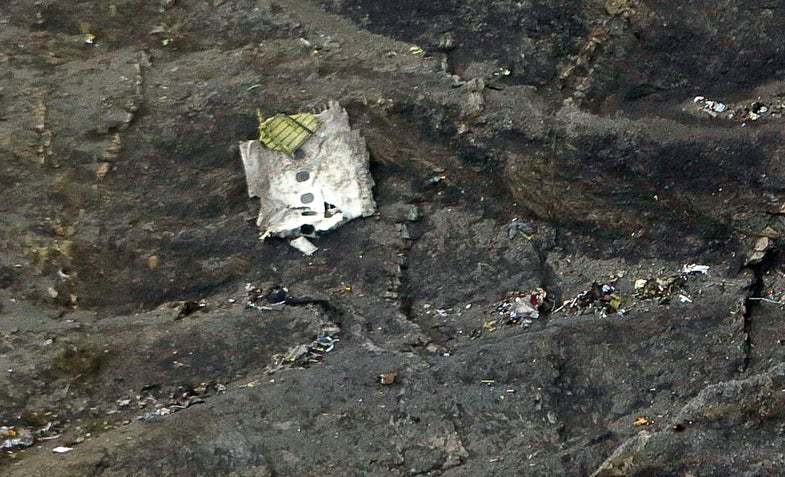 Debris from crashed Germanwings Airbus A320 are seen in the mountains, near Seyne-les-Alpes, March 24, 2015. French investigators on Wednesday searched for the reason why a German Airbus ploughed into an Alpine mountainside, killing all 150 on board including 16 teenagers returning from a school trip to Spain. Picture taken March 24, 2015. REUTERS/Thomas Koehler/photothek.net/Pool - RTR4USQ0. © POOL New / Reuters
SHARE

Update (3/25/2015, 8:48 p.m. ET): An initial analysis of the cockpit voice recorder suggests one of the pilots was locked out of the cockpit at the time Flight 9525 began its final descent, and failed to get back in even after smashing the door. This revelation will almost certainly change the scope of the investigation, barring any indication it wasn’t a deliberate act. (For instance, if the other pilot in the cockpit had a medical emergency.) If investigators suspect the act was deliberate, however, it’s almost certain we can expect further changes to cockpit security measures.

Yesterday morning, a German-operated Airbus A320, which was flying between Barcelona and Düsseldorf, crashed into the French Alps. All 150 passengers on board–including two pilots, four flight attendants, a group of German students, a pair of noted opera singers, and individuals from 18 different countries–lost their lives.

Right now we know Germanwings Flight 4U 9525 was cruising at 38,000 feet when it began an unexpected descent that, 8 minutes later, ended when it slammed into the mountainside 6,800 feet up. That’s an average descent of approximately 4,000 feet per minute, which is notable because it isn’t frantic or uncontrolled; aircraft routinely descend at 3,000 to 4,000 feet per minute. (During emergencies, a rate of 7,000 to 8,000 feet per minute or faster isn’t unusual.)

What’s mysterious is the lack of a distress call. The pilot’s emergency mantra–“aviate, navigate, communicate”–might explain this, since it programs aviators to fly the airplane first; then find a place to land it; and, finally, reach for the radio. On the other hand, it might not.

While the world awaits more information, we called up a 40-year veteran of National Transportation Safety Board accident investigations and Federal Aviation Administration regulation development. Our source asked to remain anonymous, since he’s not involved in the investigation, yet proposed the five following scenarios as possible causes, based on information currently available to the public.

The fated Airbus A320 received maintenance the day before the flight. Our expert says that draws immediate scrutiny, particularly if something were repaired, replaced, or deferred (i.e. for later repair).

Germanwings’ low-cost airline status is unlikely to be a factor in maintenance or safety questions, though. Budget airlines adhere to the same safety standards as premium carriers–including, in this case, parent company Lufthansa–and instead reduce costs through other means. They’ll cut meals and squeeze in more seats, fly through cheaper secondary airports, reduce call center staff (thanks to online-only booking strategies), and standardize aircraft fleets to limit training costs. Regulators do tend to increase surveillance of maintenance and training patterns among airlines with financial issues, but this makes cost-cutting even less likely of a cause.

Additionally, outsourced maintenance has been a contentious issue among even premium airlines. But Germanwings aircraft receive routine maintenance from Lufthansa-Technik, which has a stellar reputation for maintenance quality. Lufthansa’s fleet has flown the now-crashed aircraft since 1991, so its maintenance records should be readily available to investigators.

A maintenance problem could be relatively straightforward fix, in terms of safeguarding other airplanes. If the age of the aircraft somehow contributed–especially given the caliber of Lufthansa’s oversight–this could prompt maintenance changes to similar aircraft in fleets around the world.

Our source also zeroed in on the flight’s short duration at a cruising altitude. This reminded him of catastrophic, pressure-related structural failures at high altitudes, including the 1988 Aloha Airlines Flight 243 accident near Maui, Hawaii. In that case, a section of roof tore off the fuselage immediately after reaching cruising altitude of 24,000 feet. The incident killed a flight attendant and injured dozens of passengers, but, remarkably, the pilots safely landed the jet.

Of note in that case: The crew’s oxygen system was damaged and inoperable, but they were at a relatively low altitude, so they remained conscious. If something similar happened to Flight 9525, and their oxygen system was also rendered inoperable, the crew wouldn’t have had such n advantage–they were cruising at an oxygen-starved altitude of 38,000 feet at the time of descent. A major electrical failure associated with a structural failure could have silenced their radios.

Because the aircraft crashed on land and not at sea, and all the pieces are likely present (or not), it should be easier to detect structural problems–though it still won’t be easy. “The high-speed impact certainly has introduced additional complexity in the investigation,” our source says. “While it adds many more individual pieces to the puzzle, the absence of any significant post-crash fire means that those pieces likely will reflect damage that occurred before or during that impact.”

Structural failure can cause rapid decompression, as we covered above, but a more gradual onset of pressure loss might go undetected until it’s too late.

This has happened in several cases in mostly smaller aircraft, including golfer Payne Stewart’s 1999 crash. If this somehow incapacitated the pilots, in spite of alerts and oxygen masks, the aircraft would have continued on autopilot until it ran out of fuel. If the autopilot was deactivated, perhaps by a crew member attempting to bring the airplane lower before losing consciousness, then it could have descended gradually but without any ability to alter its general flight path.

Should that prove to be the case, we might see faster development and implementation of airliner-ready “automatic emergency descent systems” (AEDS), which could detect pressure loss and automatically route the airplane to lower altitude, giving crew time to recover. Future airplanes might even be able to land themselves at a nearby airport. Right now, the AEDS technology is available on a few newer corporate jets not present on any commercial aircraft. (Although Airbus is considering it for their new A350.) Such a system is available for private pilots, however, in the shape of an iPad app called Xavion; the app uses the device’s hardware to monitor flight conditions and take corrective measures through the airplane’s autopilot.

A fire can quickly overcome crew members, whether it originates in the airplane’s electrical system or, say, cargo or luggage in the hold. Such a scenario brought down ValuJet Flight 592 in May 1996. In that incident, improperly stored oxygen canisters ignited and flames spread quickly.

Something in the cargo compartment of Flight 9525 might have ignited and caused a fast-moving fire that disabled electrical systems, including communication systems, and incapacitated the crew. “If they had an onboard fire, one of the first acts is to isolate the fire and shut down any systems that can contribute to it,” says our source (who is, of course, also a pilot). “If that happened and they found themselves enveloped with smoke on the flight deck, they would have needed a specialized mask for seeing their instruments through the smoke. Not being able to see could have resulted in the airplane flying into the ground even though terrain alarms were going off.” (It’s not known at this point if the aircraft had such masks on board.)

Along these lines, recent debate has raged over putting lithium batteries in checked luggage. They can be volatile if improperly stored, and an FAA test conducted last year resulted in two explosive fires in two laboratory simulations. If a fire is indicated, it will likely result in new transport regulations and possibly more prohibitions against certain types of cargo on commercial flights.

However unlikely, the airplane could have been intentionally brought down, and investigators will obviously keep that possibility in mind. Experts will pore over the passengers and anyone who potentially had access to the airplane, our source noted, including how thoroughly the passenger security screening was that day, whether someone could have planted a device or done something during maintenance, if anyone could have breached the cockpit, and how secure the aircraft was while at Barcelona.

If previous crashes have proven anything, it’s that there’s always risk–however small–and often a surprising variety of factors can lead to disaster. And even though the BEA has its hands on a flight data recorder, it will take a long time to get to the heart of the matter. The overarching cause or causes may come shortly–that is, the physical chain of events that brought down Flight 9525–but learning how and why those failures happened will test the investigation team. In the end, after whatever brought down this aircraft is discovered, aviation will be even safer for it.