Roswell, New Mexico, was the drop zone for some of the first high-altitude skydives, precursors to Baumgartner's record-setting dive scheduled for Tuesday. Here, from the archives of the UFO Museum, is a look at those early government efforts--and how they created a public panic. 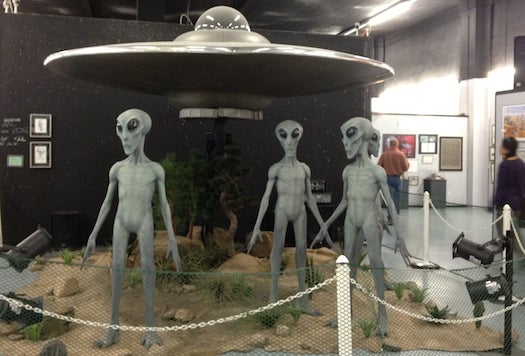 There are aliens all over Roswell, New Mexico. Not the ones purportedly found crash-landed on a ranch at the edge of town in 1947, but the ones waving from every corner of main street: Lime-green and orb-eyed, they stand sentinel outside the KFC, beckon you for a good night’s rest at the Comfort Inn, lounge on divans in an upholstery store window, and cheerfully play maracas on the wall of a Mexican restaurant. I suspect, like other Roswell residents, they stow their belongings at UFO space storage and eat at Galactic Sushi.

I’m one of the few people passing through town not for the express purpose of rubbing shoulders with them. Rather, I’m here to report on the Red Bull Stratos mission–Austrian daredevil Felix Baumgartner’s attempt to skydive from a record-breaking 120,000 feet–scheduled to take place here on Tuesday. Red Bull has erected a pop-up city, replete with a media center and mission control, at the Roswell International Air Center on the southern end of town. But like any good reporter, I start my investigation at the UFO Museum and Research Center.

Located in an old theater downtown, the museum has a sizeable exhibit devoted to a timeline of the 1947 “Roswell incident”–in a nutshell, strange wreckage reported by locals that newspapers reported as a flying saucer. Photo galleries serve as a guide to crop circles (“[Note] the surgical precision in the ‘wall’ of a crop circle, as if created by a cosmic cookie cutter”) and extraterrestrial dental implants (“Finding that this evidence is not alien in nature does not mean these individuals are not abductees”). In the rear of the museum, a flying saucer above an animatronic alien display whirs to life every few minutes.

I make my way past “X-Files” posters and a framed copy of the June 1997 Popular Science (50th anniversary “UFO Mania at Roswell” edition) to the library, where I’m informed the books are filed under the Dewey decimal system “from aliens to the paranormal—plus a couple of shelves of fiction.” After flipping through boxes filled with UFO literature from around the world, I ask the librarian if she knows of any records related to dummies dropped from high-altitude balloons in the 1950s. She hands me a thick US Air Force document titled “The Roswell Report: CASE CLOSED.” Between 1954 and 1959, the Air Force Aero Medical Laboratory released 67 anthropomorphic dummies from high-altitude balloons over New Mexico; another 180 fell from aircraft over New Mexico and Ohio. These dummies were the very first high-altitude skydivers and, the Air Force report contends, among the earliest alien life forms. 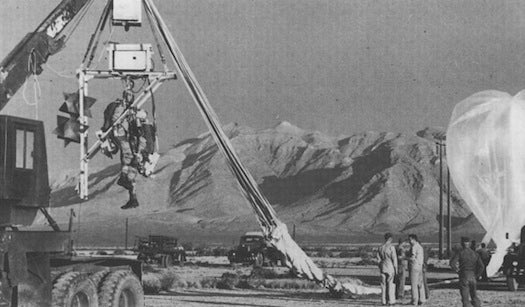 Before Red Bull Stratos, there was Project Excelsior—the Air Force program that launched a human, Colonel Joe Kittinger, to a record-setting 103,000 feet in 1960. And before Project Excelsior came an operation called High Dive: Its goal was to figure out whether a pilot or astronaut might parachute safely from extreme altitudes in the event of an emergency. Faux test pilots such as “Sierra Sam” were outfitted in flight suits and instrumented with data recorders, then sent as high as 98,000 feet to see how they fared on the way back down.

Answer: not well. “Damage to the dummies included loss of heads, arms, legs and fingers,” according to “The Roswell Report.” Prevailing winds pushed the majority outside of military reservations, some near Roswell, the author notes, and recovery crews swept in with an eyebrow-raising variety of military aircraft and vehicles. (They also used gurneys to transport the 200-pound dummies—in retrospect, an ill-considered choice). Several bodies were never recovered. What’s more, accelerometers revealed the dummies entered uncontrolled spins of up to 200 revolutions per minute (RPM) as they fell.

That data is of great interest to the Red Bull Stratos medical team today. When Baumgartner steps out of a capsule on Tuesday, suspended beneath a 300-foot-wide helium balloon, it will be into the near vacuum of the stratosphere. The slightest momentum as he leaves the craft could send him into a similar uncontrolled spin, and for the first 18 to 20 seconds, there won’t be enough air density for him to stabilize himself. That could be fatal, notes the mission’s medicine director Jon Clark, because the spin would cause blood to pool in the head; if the blood vessels rupture, it would cause hemorrhagic stroke.

On the first of three jumps for Project Excelsior, Joe Kittinger also entered a flat spin, which built up to 120 rpm. The centrifugal force prevented him from moving his arms and he eventually blacked out. His main chute automatically deployed at 17,000 feet (and because that became tangled, his reserve chute opened at 10,000), saving his life. Baumgartner’s team has designed a drogue chute that automatically opens in response to rotational acceleration rather than altitude–it’s triggered if he experiences 2.5 Gs for 6 seconds (about 96 RPM).

Baumgartner will also be instrumented with a sensor system that straps to his chest and records heart rate, EKG signals, respiratory rate, and skin temperature; a three-axis accelerometer will measure three angular degrees of freedom (whether he’s tumbling or spinning, for example). So few people have successfully parachuted from high altitudes that this data will help address the question first posed 60 years ago by project High Dive: Can humans safely escape a craft and fall back to earth from extreme heights? The answer, at the advent of the private space industry, will be just as timely as it was during the Mercury program.

Both projects High Dive and Excelsior operated under a lot of secrecy. “The Roswell Report” points out that one of Kittinger’s flights probably also contributed to alien lore: A low-altitude, gas-balloon in which he was training other pilots crash-landed near Roswell; the injured pilots, including one with massive head trauma, were taken to a local hospital. After they’d received medical attention, Kittinger, worried about receiving unwanted publicity, rushed them back out in the chase helicopter. “The legend grew from there,” Kittinger recalls in his memoir. A display at the museum includes a hospital employee describing a very similar scenario: a red-headed captain taking away “a creature with a huge, grotesque head.”

The Red Bull Stratos launches seem to be flying under the radar too–at least in Roswell, where residents are most likely to spot a gossamer craft hovering over the horizon in the pre-dawn hours. I informally survey everyone I meet, from Denny’s waitresses to gift shop staff, and by all accounts the only action in town is at the state fair and farmers market. The greeters at the visitor’s center only learned about the Stratos dive this weekend, when a Belgian camera crew wandered in and asked for directions. As I leave there, I walk by an arts festival and admire the sidewalk-chalk portraits. A 5-year-old named Soren drew a very good likeness of a lime-green alien with orb eyes.