Video: A Real Working Hoverbike Zooms Across the Desert

Future tech doesn’t always look the way the ’70s might’ve predicted, but sometimes it does. Case in point: this beautiful,... 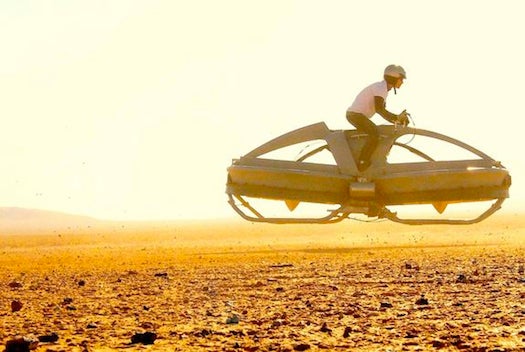 Future tech doesn’t always look the way the ’70s might’ve predicted, but sometimes it does. Case in point: this beautiful, fully functional hoverbike that could’ve been torn out of our archives. It’s going to be a while before you see one zipping down the street, but if the public does get a chance to ride one, the bike is rideable right out of the box–no training required.

Brought to you by aerospace firm Aerofex, the bike runs on a pair of powerful fans. It picks up on instinctive movements people make while riding a bicycle or motorbike, then moves in the same way (except, you know, flying), meaning anyone can have a go at it. For safety reasons, they’ve tested it at 30 mph and 15 feet high, although earlier versions of it went as fast as a helicopter.

Like all fun toys, the military will probably get this one first. The founders aren’t planning to make a manned version immediately, they told Innovation News Daily; instead they’re opting to use it as a test platform for creating hover drones.

But until we see it somewhere else, fight back your Star Wars speederbike dreams with this test run video, shot in the Mojave Desert.