Lexus Unveils The Lexus Of Hoverboards 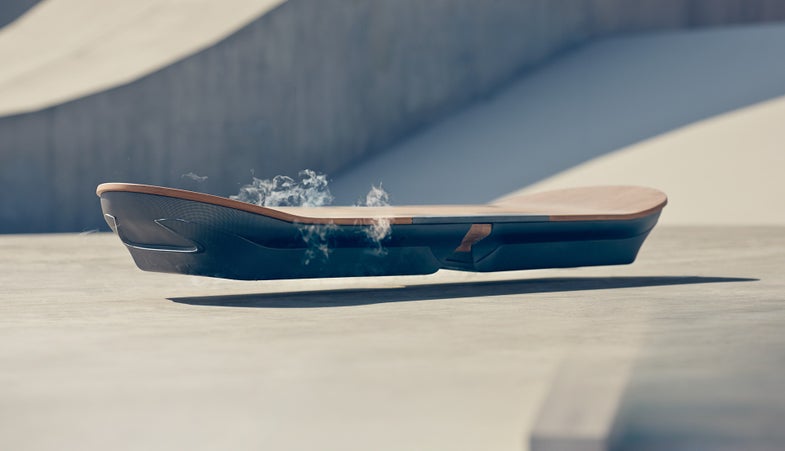 Set in the far-off year of 2015, the 1989 film Back To The Future: Part II features a complex meditation on fate and foreknowledge of events. More importantly, it also has freakin’ hoverboards, the logical next step from earth-bound skateboards. Now, luxury carmaker Lexus created what appears to be a working prototype of said hoverboard.

Lexus says this is a real, working device that can be ridden today. However, hoverboard videos can (and previously have been) convincingly faked outside of the movies. Take Huvr, a supposedly real hoverboard that went viral last year after a series of posts and video featuring cameos by Tony Hawk and Christopher Lloyd (a.k.a Doc Brown from Back to the Future), which turned out to be an elaborate hoax spearheaded by comedy website Funny or Die.

But technologically, we are finally at a point in history where it’s actually possible to make real hoverboards, albeit very limited ones. Last month, an American set a Guinness World Record for longest hoverboard flight by piloting a propeller-powered craft over a lake in Quebec. Late last year, a company called Hendo unveiled its own working hoverboard that floats just a few centimeters above ground, and over metal-lined surfaces (Lexus engineers confirmed to Engadget that their board has the same restriction). And after years of abandoned research into the concept, the U.S. Army is looking at hoverbikes again.

These real-world hoverboards and bikes are really helicopter cousins, using rotors or sometimes ducted fans to provide lift. Because they fly low, it looks like hovering, but it’s really just a different form of flight. The Lexus hoverboard, which appears to hover a couple inches above the ground, instead uses liquid nitrogen-cooled superconductors and magnets. It also has natural bamboo, which doesn’t mean anything for aeronautics but creates a nice luxury feel. In the video, a skateboarder places his shoe on top of the board, leaving us wondering if it actually supports the weight of a human. Since the screen fades to black, it’s safe to guess that it doesn’t, but Lexus wants people to “follow the journey” at the hashtag #LexusHover. Cool marketing stunt, luxury brand.