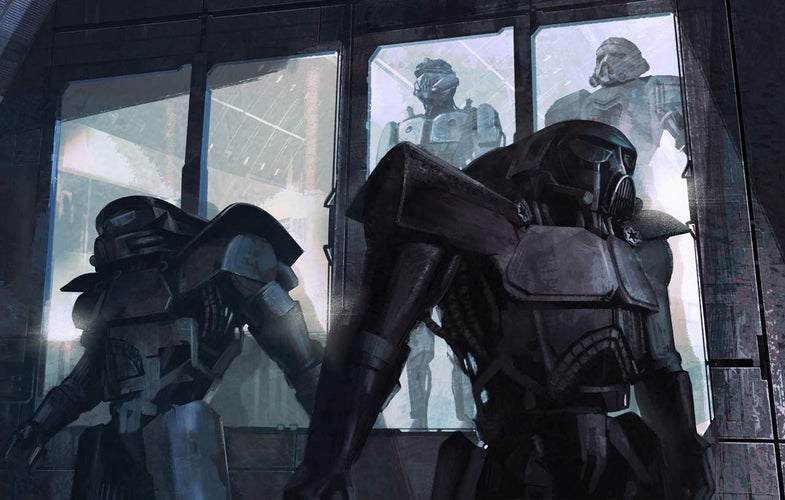 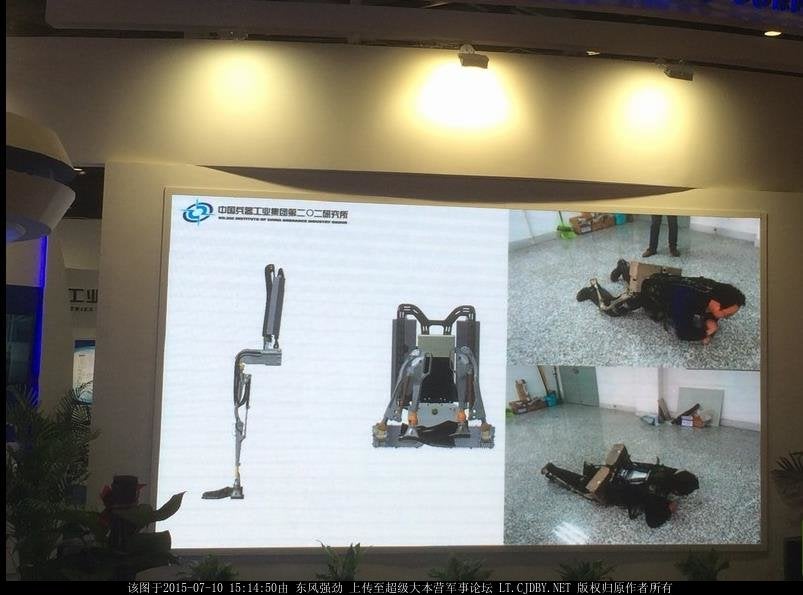 The new 202 Institute exoskeleton has improvements over the Zhuhai 2014 version, including reinforced motors, a larger battery pack and hip section. It also has enough dexterity to allow crawling under enemy fire, as shown by an engineer testing the exoskeleton.

While powered armor suits are a big deal for futuristic soldiers in the Edge of Tomorrow and Alien, real world researchers are hard at work on giving the soldiers of near-future battlefields exoskeletons. Right now, such exoskeletons, whether in the U.S., China or Europe, are generally intended for logistical and engineering purposes, due to their short range and battery life (most exoskeletons can only operate independently for several hours). But Chinese manufacturers express hope that upgrades to exoskeletons could make them suitable for frontline infantry in difficult environments like mountainous terrain. 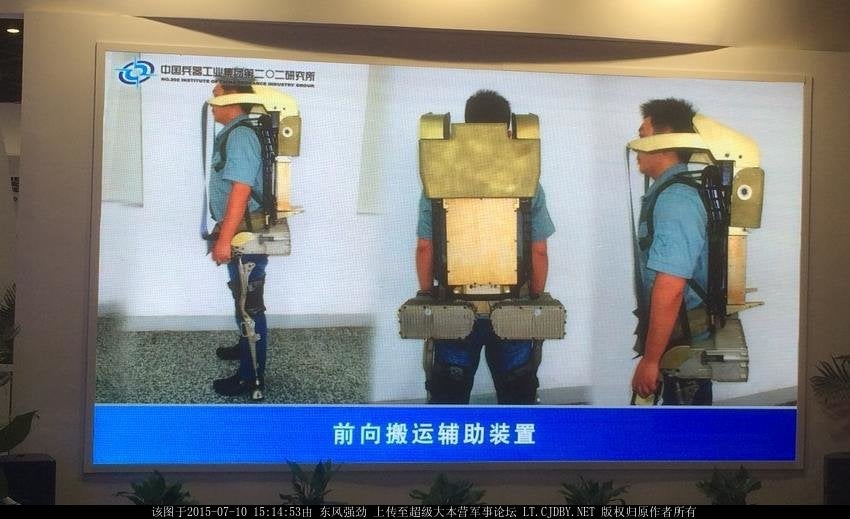 The new Chinese exoskeleton has improved performance, including an add on crane/lifter on the upper body, to add in lifting heavy objects.

The 202 Institute of China Ordnance Industry Group first displayed its exoskeleton at the November 2014 Zhuhai Airshow; showing off its flexibility. At a June 2015 presentation, the 202 Institute’s updated exoskeleton showed upgrades, including a larger battery pack on the back, strengthened legs and more powerful, hip mounted hydraulic/pneumatic pumps to power leg movement. The exoskeleton can allow the user to carry over 100 pounds, with enough charge to walk 20 kilometers at a speed of 4.5 km per hour (Lockheed Martin’s HULC also has similar speed and endurance figures). Other photos showed that the exoskeleton had enough flexibility to allow lateral ground movement; i.e. crawling in the mud while under enemy fire. 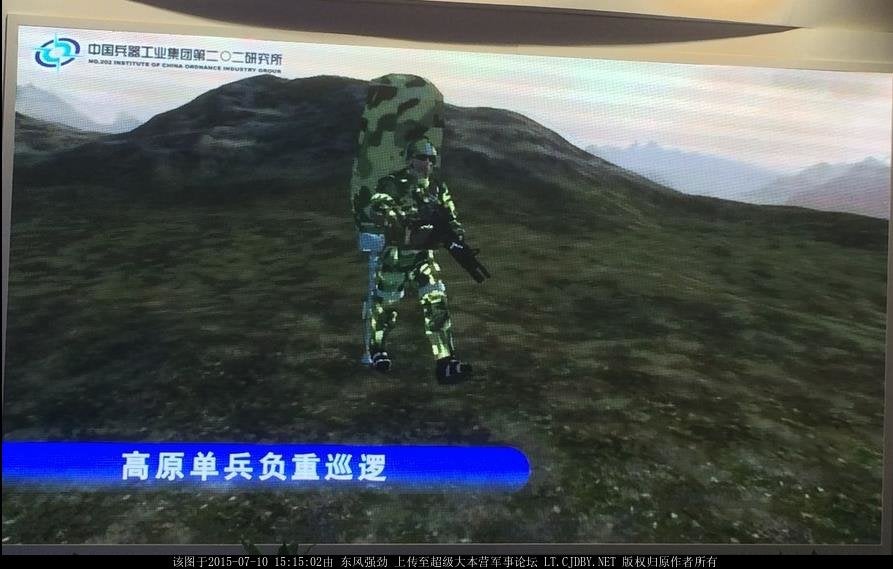 202nd sees its exoskeletons eventually being used by frontline troops, to make mountainous marches easier, to say nothing of easily carry a 100 pound pack of supply and ammunition. 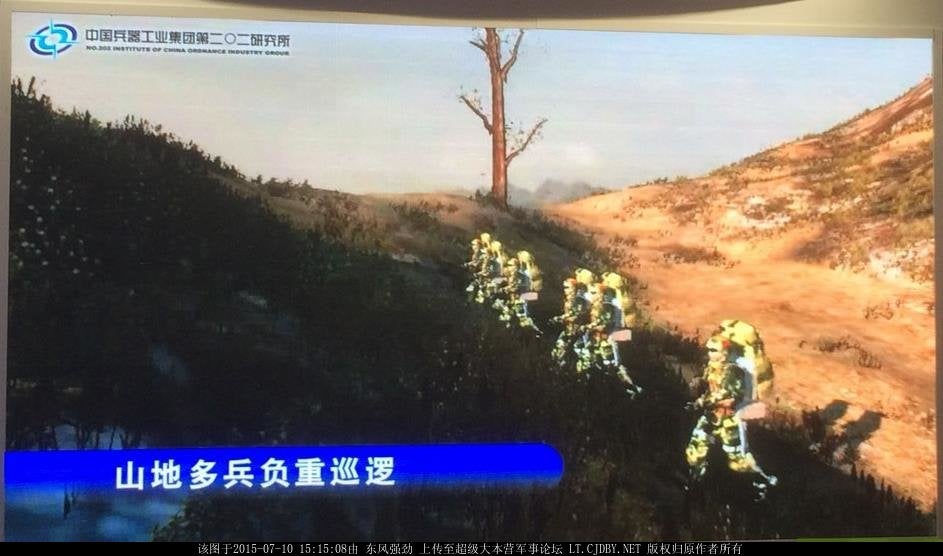 This is Space Marine Squadron One…

Future PLA soldiers march with heavy gear like ZH-05 smart rifles and heavy body armor, all made possible by the 202 Institute’s exoskeletons.

Interestingly, the 202 Institute presentation included computer generated videos showing exoskeleton wearing soldiers and infantry squads armed with assault rifles, while carrying huge personal loads in mountainous terrain. While exoskeletons would provide soldiers with the ability to individually carry larger loads of ammunition, food, and batteries to improve performance and endurance in rough environments, they also have the carrying capacity to allow the average infantry man to carry a heavy machine gun (like Arnold Schwarznegger in Predator) or a whole body covering suit of armor (like the Imperial Stormtroopers). Just as H.G. Wells and Jules Verne dreamed of 20th century warfare, the killer combinations of men melded to machines seen in Avatar and Star Wars might just translate into reality as regular sights on future battlefields.

China’s New Exoskeletons: Not Just for Call of Duty or Tom Cruise Anymore