How Guns Got Smarter

The marketplace might finally be catching up to science fiction 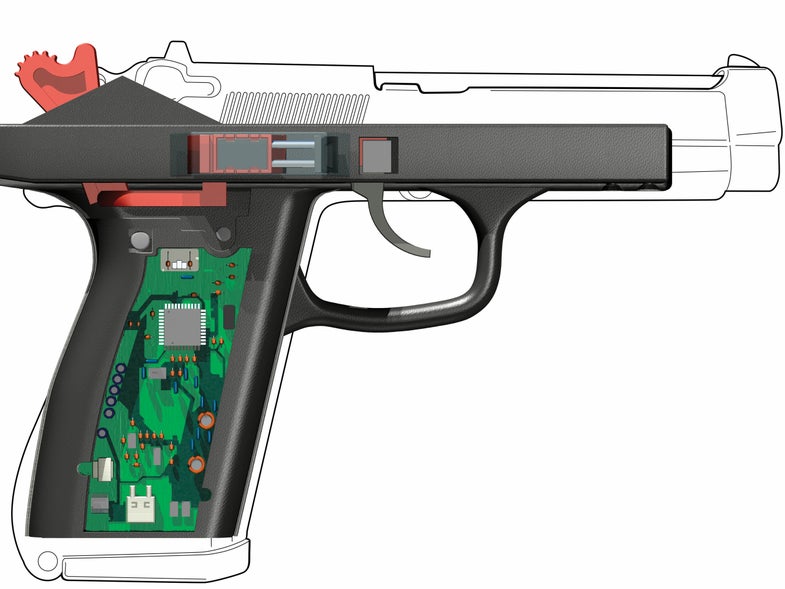 As any science-fiction fan knows, a smart gun is designed to work only for the person authorized to use it. Since the 19th century, Smith & Wesson, Colt, and even Silicon Valley have all attempted to disrupt the now-multibillion dollar gun industry and bring a theft-proof firearm to market. While politics and public opinion have hampered previous efforts, a new generation of smart guns is now on the cusp of becoming reality.

S&W introduces a gun that requires pulling the trigger and a lever simultaneously. Bonus: It’s childproof. More than 500,000 are sold over its 50-plus-year run.

Magna-Trigger launches. A magnet prevents the gun from firing unless a compatible magnetic ring is worn.

Congress funds Sandia National Labs to study if smart guns can help lower the rate (11 per year) of police killed with their own weapon during a struggle.

Firearm-maker iGun produces a shotgun with an RFID-like magnetic tag. The market yawns, so the idea stalls.

After working for nearly a decade on a multisensor biometric for a smart gun, the New Jersey Institute of Technology wins a $250,000 grant to develop it.

James Bond uses a smart gun that recognizes his palm print in Skyfall.

German company Armatix releases the first smart gun commercially available in the United States: the iP1. This .22-caliber pistol pairs wirelessly with a watch. Gun shops initially agree to sell the iP1 but back out due to intense consumer pressure. Meanwhile, the Smart Tech Challenges Foundation awards $1 million to develop smart-gun technology. Teenager Kai Kloepfer wins a portion of that for his fingerprint-activated pistol design, and starts company Ægen Technologies to commercialize it—all before he turns 18.

Seattle holds the first-ever smart-gun symposium. Shortly after, a bill is introduced to Congress that would allocate grants to further smart gun research. “Once we have funding, it’ll take just two years to get to market,” says Donald Sebastian, senior vice president of R&D at NJIT.

This article was originally published in the October 2015 issue of Popular Science, under the title “Guns Get Smarter.”