Invention Awards: A Video Gun Sight That Keeps Soldiers Out of Danger 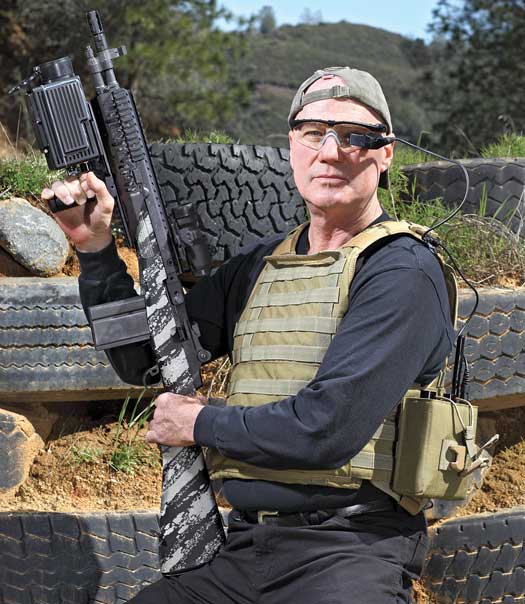 Today’s featured Invention Award winner is SmartSight, a gun-cam system that lets soldiers see around corners and shoot targets without entering the line of fire.

The Rolling Green hills of Sonora, California, no longer lure prospectors with the promise of gold, but for Matthew Hagerty the draw is just as powerful: They’re a secluded hideaway ideal for perfecting his military invention, called SmartSight. Ten years in the making, SmartSight is a gun-cam system that allows a soldier to see around corners and shoot targets without putting himself in the line of fire.

It consists of a wireless video camera mounted to the rail of an M4 or .308 SOCOM carbine, a small computer worn on a military vest, and a thumbnail-size color head-up display affixed to a pair of protective glasses. In effect, SmartSight turns the muzzle of an assault rifle into a third eye—a soldier can crouch behind a blockade, stick his weapon over his head, and shoot his target with the same accuracy as if he were taking aim normally. “No other weapons sight can do that,” Hagerty says. “What you see is what you get.”

While working as a weapons tester for defense contractor Hughes Aircraft in the 1990s, Hagerty sought the advice of many soldiers and learned exactly what they did and didn’t want in a weapon. When the company began developing a video rifle sight for an Army program called Land Warrior, he knew right away that it was too heavy, that the wire running from the camera to the soldier would limit mobility, and that the video feed lagged. Hughes was set on the design, though, so when Hagerty later left the company, he decided to develop his own system, perfectly tailored to the soldier. 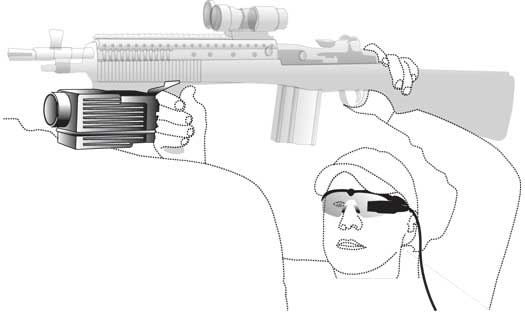 A camera mounted to the rail of a rifle beams real-time video to a small computer worn on the soldier’s vest. From there, a wire transmits the imagery to a head-up display, enabling the soldier to see whatever the gun is pointed at, even while he remains safely hidden.

Today, as Hagerty predicted, the Army has canceled the $500-million Land Warrior program. Meanwhile, with $7 million in funding from Congress and four patents pending, Hagerty is preparing to turn over his fifth prototype of SmartSight to the Special Operations forces for testing next year.

The prototype showcases SmartSight’s biggest innovation—its real-time wireless video transmission, which untethers the soldier from his rifle’s camera. Miniaturizing the hardware found in news broadcasting equipment, Hagerty devised a way to beam live, uncompressed high-quality video from the 1.5-pound camera at a speedy 30 frames per second; meanwhile, custom software overlays the shooter’s red target dot in the head-up display so that the view appears exactly as it does through the gun’s conventional scope, all with no delay. Former Navy SEAL captain Larry Lasky, who has demoed SmartSight, says this capability could transform warfare, especially in urban environments.

Hagerty runs a lean operation, overseeing just 10 employees and opting to work out of his four-car garage. “I go from one end of the house to the other, and that’s my commute,” he says. SmartSight bears the marks of his relentless efficiency. The latest prototype weighs just three pounds—10 pounds lighter than the original. To shave weight, the team streamlined the electronics and reduced the number of circuit boards from nine to one. They also replaced the protective aluminum casings with ones that they machined out of a lightweight plastic tough enough to withstand shock, heat, cold and water.

A self-described perfectionist, Hagerty isn’t done making improvements. For one, he’d like to make the device even lighter. Ultimately, though, if SmartSight impresses the people who will actually use it, Hagerty could strike something better than gold: a military contract to begin manufacturing devices by the end of next year. 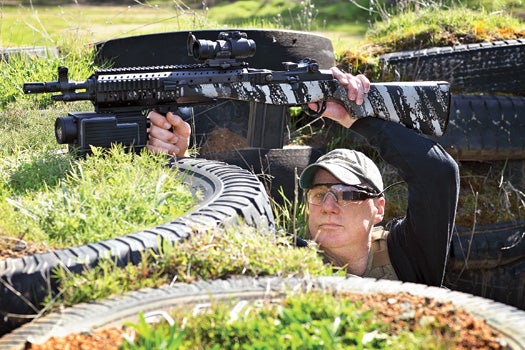