War, Pirates and the Story of the First D.C. Memorial

Washington, D.C. is lousy with memorials — close to a thousand. Within a short walk from ShipShape’s North West headquarters... 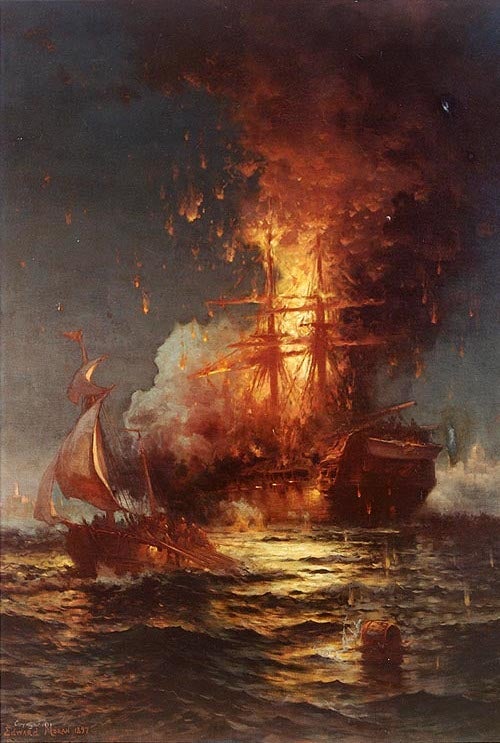 Washington, D.C. is lousy with memorials — close to a thousand.

Within a short walk from ShipShape’s North West headquarters there’s a 1922 Joan of Arc statue from the ladies of France to the ladies of America, a memorial dedicated to American bachelor president James Buchanan and a statue of Duke “Take the A-Train” Ellington surrounded by swirling piano keys.

But in the District’s earliest days there was only one —commemorating the first U.S. war abroad — and it stood alone for more than 30 years.

Twenty years after the U.S. Constitution was ratified, American merchant ships were having a tough time plying their wares in the Mediterranean.

Forces affiliated with the Sultanate of Morocco and the Ottoman Empire took to raiding the unprotected American merchants, stealing ships and capturing crews.

The collected group of raiders was better known as the Barbary Pirates.

The pirates communicated to Washington the attacks would stop with the payout of what amounted to a maritime protection racket.

It was a price the U.S. couldn’t really afford with tribute requests of up to ten percent of America’s annual budget.

Instead the U.S. began protecting its merchant fleets with a collection of six frigates that began its Navy.

One of those frigates, USS Philadelphia, was snatched by Tripoli pirates and was used to repel invaders as an anchored gun platform into the now-Libyan port.

In a move the famed British admiral Lord Horatio Nelson called the, “most bold and daring act of the age,” a group of American Marines led by Lt. Stephen Decatur snuck onto Philadelphia burned it to the waterline in 1804.

A year’s worth of Northern African skirmishes culminated in the Battle of Derna where Marine 1st Lt. Presley O’Bannon led eight Marine and a rag-tag group of 500 mercenaries across the desert to capture the now-Libyan town.

O’Bannon was presented with a curved Ottoman Mameluke for his victory, and similar swords remains in ceremonial use today in the U.S. Marine Corps.

A month later, the war was over.

To commemorate the loss of six officers in the conflict, a group of naval officers commissioned an ornate Italian monument by the noted sculptor Micali of Leghorn (with help of the Bishop of Florence).

“The white marble monument consisted of a column 30 feet high, mounted on a pedestal and topped by the American eagle,” according to a 1972 article in the Naval Institute’s Proceedings (Day job alert: I work for the Naval Institute and we ran the story last year for Memorial Day).

“On two sides of the column were carved three antique beaks of galleys, and on the other two sides, antique anchors in flat relief. At the pedestal were life-size symbolic figures. Inscriptions and urn lamps at each corner of the base completed the alto­gether pleasing effect.”

The monument was shipped back on USS Constitution and was erected at the Washington Navy Yard in 1808 and remained there through the war 1812.

In 1831 Congress arranged for the simply titled “Naval Monument” to be moved to the grounds of the Capitol.

Not many people liked it there.

“And to cap the climax of absurdity, the Naval Monument had, as an evil omen I presume, been placed in a small circular pond of dirty fresh water-not large enough for a duck puddle-to represent the Mediterranean Sea,” wrote David Porter — who as a captain oversaw the creation of the memorial — in a letter to a friend.

In 1860 the memorial was moved to Annapolis on the yard ( what others would call a campus) of the U.S. Naval Academy.

What’s striking about the first monument is how stark the language of the base and how rooted it is into the U.S. Navy’s vision of itself as a guardian of trade.

“The love of Glory inspired them. Fame has crowned their deeds. History records the event. The Children of Columbia admire. And Commerce laments their fall.”