An Algorithm That Recognizes Faces Better Than People Can 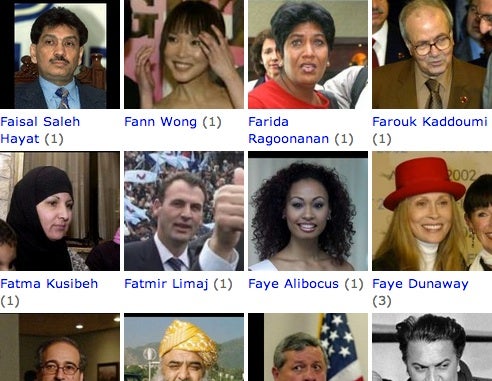 Labeled Faces in the Wild, University of Massachusetts
SHARE

It’s already a little eerie when Facebook suggests tags for who it recognizes in your photo, especially for faces that are small, blurry, or otherwise difficult to distinguish. What if Facebook were even better–better at recognizing people in pictures than you are?

Two computer scientists are announcing they’ve made a program that is better at matching photos than people are, the Physics arXiv Blog reports. This is the first time a program has performed better than people at recognizing people.

To be sure, the new algorithm, developed the Chinese University of Hong Kong, outperforms people in a very specific task with a very specific set of photos. The Hong Kong researchers asked the algorithm to tell whether two faces are the same, drawing from a set of 13,000 photos of 600 public figures. Humans get the right answer 97.53 percent of the time, on this test. The Chinese University of Hong Kong algorithm is right 98.52 percent of the time. (You can try some sample matches at the Physics arXiv Blog!)

Although this isn’t exactly the same as recognizing your coworker Mary on the street, the feat is still impressive. The 13,000-photo dataset in which the algorithms were tested is considered a standard benchmark in computer vision, the Physics arXiv Blog reports. Plus, the task is not unlike real life applications. For example, if law enforcement wanted to identify a face in a security camera snapshot, they would run a program that tries to match their suspect’s snapshot with their database of mugshots. The program would probably run through different possible comparisons, asking, just as the Hong Kong algorithm does, “Does Mugshot A match Snapshot X?”