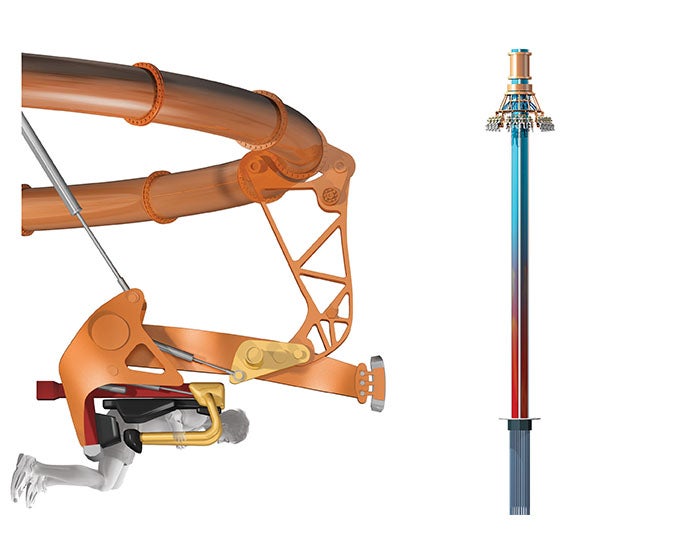 The 335-foot Falcon’s Fury, which opens this spring at Busch Gardens Tampa, isn’t the tallest drop tower in the world. That honor goes to 415-foot Zumanjaro at Six Flag’s Great Adventure. But the Fury offers a thrill no other ride does: a 60-mph, face-first free fall.

After about 100 feet of free fall, magnets in the seats interact with raised metal strips on the sides of the tower. That attraction slows the descent and allows riders to swing back upright as they glide to a stop.

Designers modified a standard roller-coaster harness with an extra-thick cushion around the waist to support riders’ weight comfortably as they lie flat.

The tower’s hollow steel construction has about three feet of give in any direction, allowing it to withstand the occasional Floridian tropical storm.

Engineers drove 105 steel support beams as deep as 205 feet into the ground and fused them together with a concrete cap. A four-foot-thick base secures the steel tower to the foundation.

Once riders reach the top of the Falcon’s Fury, air compressors pull the seats from the bottom, tilting riders 90 degrees so that they’re staring nearly 300 feet straight down.