Russian Bluster Aside, What Will Become Of The ISS?

Russia's recent threat to leave the space station by 2020 was in fact the original plan. 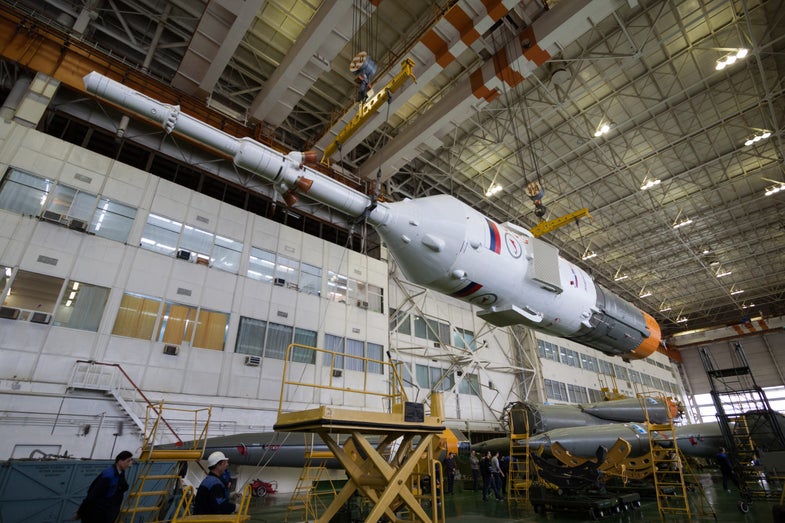 The Soyuz rocket and Soyuz TMA-12M spacecraft are assembled at Building 112 on the Baikonur Cosmodrome on Saturday, March 22, 2014 in Baikonur, Kazakhstan. Launch of the Soyuz is scheduled for March 26 and will send Expedition 39 Soyuz Commander Alexander Skvortsov of the Russian Federal Space Agency, Roscosmos, Flight Engineer Steven Swanson of NASA, and Flight Engineer Oleg Artemyev of Roscosmos on a six month mission to the International Space Station. Photo Credit: (NASA/Victor Zelentsov). NASA/Victor Zelentsov
SHARE

Russian deputy prime minister Dmitry Rogozin announced on May 13 that his country will end cooperation on the International Space Station after 2020. The comments spurred gloomy headlines: “Russia’s retaliation could doom Space Station,” wrote one science news outlet, while NBC News ran with “Russia Makes Plans to Kill Space Station in 2020.”

What many accounts have missed is that the station’s fate past 2020 has never been assured. The ISS, first launched in 1998, is nearing the end of its functional life, with many parts of the station’s structure deteriorating after enduring decades of extreme heat and cold.

Left in orbit, it could turn into dangerous space junk. So the plan has long been to destroy the ISS by means of a controlled re-entry into the Earth’s atmosphere and a crash into the ocean.

In 2010, the international station management team began advocating an extension of the International Space Station’s operations from 2020 to 2028, a year that would coincide with the 30th anniversary of the launch and connection of its initial two sections, Russia’s Zarya and the U.S.A’s Unity. Earlier this year, the Obama administration approved an extension to 2024. It’s unclear how either plan will fare, technologically or financially, if the Putin government makes good on its latest statements.

(This 2013 report from CBS News is well worth reading for its account of the challenges of keeping the International Space Station orbiting and operating safely into the next decade, as well as the station’s engineering and multiple sections, which include two laboratories: Japan’s Kibo lab, and the European Space Agency’s Columbus lab.)

This isn’t the first time Russia has loudly proclaimed a 2020 expiration date for the ISS. In 2011 a Roskosmos official said much the same, prompting Discovery News to write, “Space Station to Be Sunk After 2020.” That may account for NASA’s thus-far stoic response that the agency has not been formally notified of an end to American-Russian cooperation on the ISS.

But the current chill in Russia-U.S. relations, caused by the crisis in Ukraine, is what’s spurring some of Rogozin’s recent bluster, as evidenced by his tweet last week in response to new U.S. sanctions against Russia:

(Translation: “Having reviewed the sanctions against our space program, I suggest the U.S.A. deliver its astronauts to the ISS with the help of a trampoline.”)

This rhetoric doesn’t suprise James Oberg, author of the book “Red Star in Orbit: The Inside Story of Soviet Failures and Triumphs in Space,” and noted space historian.
Rogozin is trying to revive the fading Russian space industry, says Oberg, which may also account for why a proposal to put Russian colonies on the moon by 2050 recently saw light in the pages of the newspaper Komsomolskaya Pravda. But in mentioning 2020 rather than next week, next month, or next year, says Oberg, the deputy prime minister is effectively admitting “that they need us as much as we need them.”

The U.S. is relying on Russia for transporting astronauts to and from the ISS for several years, and Russia’s space station modules currently provide propulsion for the structure. But on board the station itself, Oberg says, Russia’s sections and crew rely upon American-made and operated equipment for electricity and communications. Further, Russia’s effort to to complete and launch its own science section is “years behind schedule,” says Oberg, so it must rely upon the labs contributed by other nations.

No matter what happens with Russian space policy, Oberg is excited for the next decade of space science, which he believes will be shifting from a “CERN model” of multiple nations contributing to and collaborating at one research facility, to “the Antarctica model” of many smaller stations forming and ending cooperative efforts as the science requires.

If Russia does exit the ISS soon after 2020, he says, it will happen at about the same time that new “human-rated” spacecraft like SpaceX’s Dragon come into use, and end Russia’s current lock on crew transportation.

“The Ukraine crisis has not diverted the station’s evolution into a new path,” Oberg says. “It may have put into sharper focus the different paths the station could follow, but that was happening anyway.”