It could be great for desalinating water and other applications. 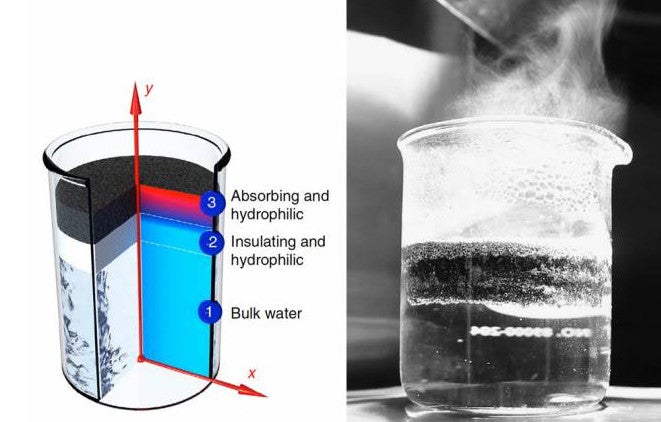 Generating steam is enormously useful. Much of the world’s energy actually comes from steam–coal power plants heat up water to produce water vapor, which turns turbines to generate electricity. A new technology creates steam by harnessing solar energy, using a relatively cheap sponge-like material, and it does it with greater efficiency that ever previously achieved, according to a study published in the journal Nature Communications.

The researchers don’t claim the device could be used to create electricity, at least not yet. But it could relatively easily be scaled up to make fresh water out of salt water via distillation, for example, or to sterilize medical or food-processing equipment in areas of the world where electricity is hard to come by, said MIT researcher Hadi Ghasemi in a statement.

The spongey device is made of graphite on top, with a carbon foam on the bottom. The graphite is highly porous and fractured, a crown of flakes, created by putting the material in a microwave oven and allowing bubbles to come to the surface and burst, in a way “just like popcorn,” the researchers said. Graphite absorbs the sun’s rays and heats up. This creates a pressure differential that sucks water from the bottom into the top, where it vaporizes. This sponge converts 85 percent of the solar energy in sunlight it absorbs into heat, the authors wrote in the study, which is extremely efficient.

Current methods to create steam involve heating liquids or using a system of mirrors to concentrate sunlight, which are both more expensive and inefficient–whereas the graphite and carbon used in this sponge are relatively easy to get your hands on, the scientists said.