Stained Glass That Doubles As A Solar Power Source

Artist Sarah Hall’s collection of glass facades are beautiful and good for the environment! 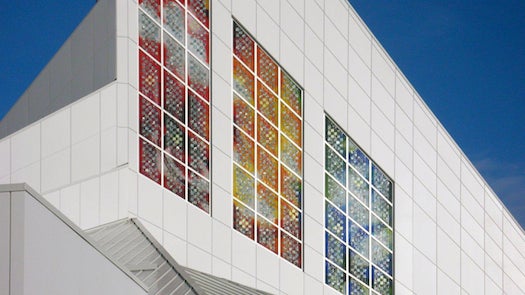 A cathedral in Saskatoon, Saskatechewan recently installed stained glass windows embedded with solar panels that will connect to the local electrical grid. “Lux Gloria” is one of several large-scale glass installations created by Toronto-based artist Sarah Hall. The collection is designed to blend the aesthetics of hand-painted, colored glass with the Earth-saving functionality of solar panels.

The artwork has silver, trapezoidal solar cells of a various sizes sandwiched between layers of colored glass. To achieve the transparent, reflective effect, Hall added dichroic glass to the back of the panels.

Once fully connected, “Lux Gloria” is expected to provide about 2,500 kilowatt-hours of energy annually, the equivalent of about a third of the amount used by a typical Saskatoon home. The energy will primarily power the cathedral, but if there’s any juice left over, it’ll be fed directly into the power grid. 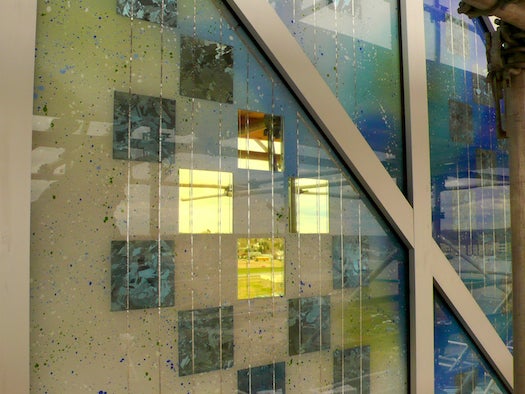 The installment contains silver, trapezoidal solar cells of a variety of sizes sandwiched between layers of colored glass.

Hall began installing solar-stained windows in 2005. Thus far she has four in Canada and two in the United States. However, “Lux Gloria” is the first to be connected to an electrical distribution network and incorporated into the building’s existing structure making it the first building-integrated photovoltaic system. 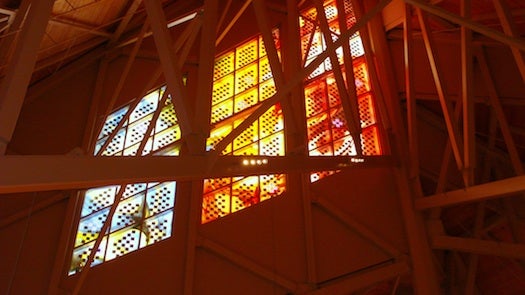