This Newfound Species Has The Highest-Pitched Call Recorded

Which it uses to attract mates, natch. 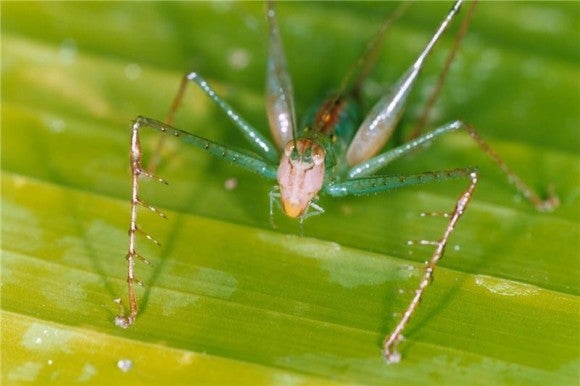 Yowch. Supersonus is newly discovered genus of katydids that includes three species that sing at the highest known frequencies of any known insect, spider, or other arthropod. Male katydids sing to attract female katydids, but at these frequencies, they would be difficult for other species to hear. That's a good thing. Researchers think the high frequencies likely help Supersonus katydids from being overheard by predatory bats. University of Lincoln
SHARE

Supersonus can hit the high notes. One species in this newly discovered genus of katydid hailing from the rainforests of Ecuador and Colombia can produce mating calls of a higher pitch than previously recorded for any arthropod, a vast group that includes insects and spiders. Usually katydids produce calls between 5 kHz to 30kHz–meaning that humans, who can hear up to 20 kHz, can enjoy the singing of some species. But the three new species in this group are unique, producing calls as high as 150 kHz, far beyond what you and I can hear (unless you are a human-bat hybrid).

Speaking of bats, the authors of the study–published in _PLOS ONE_–said they think that the high-pitched calls allow the insects to communicate without being easily overheard by bats. Though some bats can hear frequencies this high, the “extreme ultrasonic” calls do not travel far and would be unlikely to be intercepted.

The calls are made by the katydids’ tiny wings, which produce sound as they are rubbed against one another. The wings reach such pitches by being quite small—less than 1 millimeter in length. For this reason, the katydids cannot fly. When slowed down enough for humans to hear, the calls sound like bouncing ping pong balls, study co-author Fernando Montealegre-Z, a biomechanics expert at the University of Lincoln in the United Kingdom, told National Geographic.