Deepwater Horizon Spill May Be Responsible For Heart Defects In Fish

Fish that were exposed to oil when they were young will be unlikely to survive to reproduce. 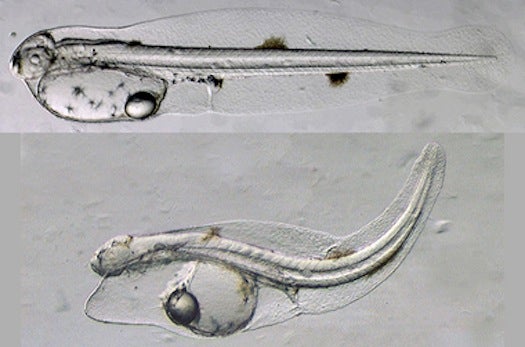 Nearly 170,000 gallons of oil have spilled into Texas’ Galveston Bay, threatening bird habitat and serving as a reminder of the lasting effects of such disasters. The 2010 Deepwater Horizon oil spill exposed all a manner of life in the Gulf of Mexico to sweet Louisiana crude, with many serious effects lasting to this day. For example, a study published in December found dolphins in the area still suffer from lung disease and low birth rates. Now, a study published in the Proceedings of the National Academy of Sciences has found that the spill may have led to heart defects in two species of tuna and one species of amberjack, all commercially important fish in the Gulf.

The researchers replicated conditions seen in the gulf shortly after the spill began in late April 2010, and exposing developing fish to varying levels of crude oil. Here’s what they found, as reported by The Verge:

Steve Murawski, a marine ecologist at the University of South Florida who was not involved in the study, told the Verge that the experiment involved “as near realistic conditions as possible.”

The study shows that crude oil and polycyclic aromatic hydrocarbons it contains can be toxic to tissues in the developing heart. The chemicals can also cause arrythmia, likely by effecting the heart’s ability to send and receive electrical signals.

“Not only is oil toxic to fish, its effects are not limited to small fish,” Jacqueline Savitz, vice president for U.S. oceans at the nonprofit group Oceana, told the Washington Post. “In fact, they extend to the largest and most commercially valuable fish we know: tuna. For a species likebluefin tuna, whose populations have crashed due to overfishing and are fighting to rebuild their former abundance, BP’s oil was a shot to the heart.”

The study was published yesterday, on the on the 25th anniversary of the Exxon Valdez oil spill. That spill had similar effects on fish that lay their eggs near the shore, and also killed an estimated 250,000 birds.