How To Make A More Environmentally Friendly Cow

A new search for ways to reduce the methane cattle produce. 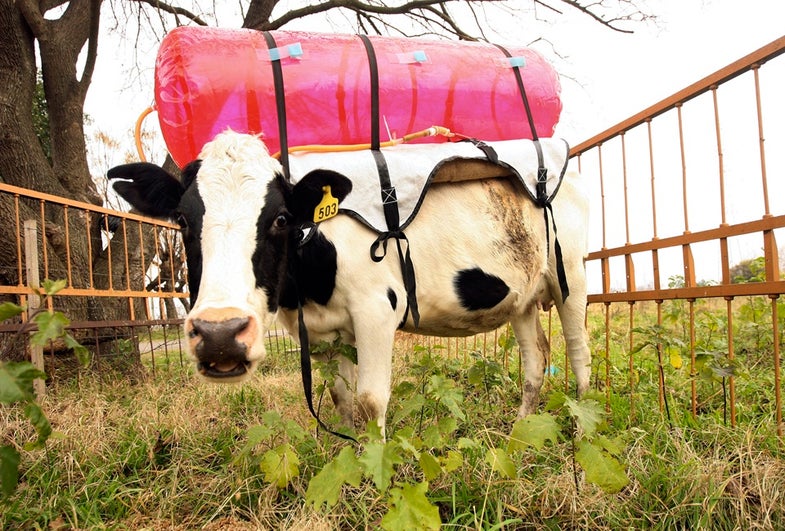 Scientists around the world have worked on making buildings, cars and light bulbs more environmentally friendly. What’s next? Cows.

Cattle emit methane, a greenhouse gas that’s less abundant than carbon dioxide, but, pound for pound, has contributed more to global warming than CO2 over the last 100 years. Methane is often an underappreciated greenhouse gas, but it’s been back in the news lately. Late last month, the Obama Administration launched an effort to reduce the U.S.’ methane emissions. Just weeks beforehand, fatal, gas-leak-triggered building collapses in New York City reminded the nation that American cities may have thousands such leaks, which contribute to global warming. Worldwide, however, domestic livestock are actually the top source of human-related methane emissions. So researchers have come up with some interesting ideas for making cows less methane-ey. Financial Times recently reported on a few of these efforts, as has Popular Science.

First things first. Apparently, most cow methane doesn’t come from cow farts. “Ninety-seven per cent of all the methane gas is released by the front end through burps, not from the back end,” Juan Tricarico of the Innovation Center for U.S. Dairy, a nonprofit research organization, told Financial Times. Tricarico directs a project at his center called Cow of the Future.

So what goes into the cow of the future?

Academic researchers are trying to better understand the microbes that live in the cow digestive system, whence cow methane comes. Such research could reveal the best, least methane-ey diet for cows. Or maybe the cow of the future could take probiotic supplements to boost her gut population of non-methane-producing microbes?

One U.S. company already puts research like that to work. C-Lock of South Dakota sells feeding stations containing supplements, such as basil, that reduce the methane cows produce, Financial Times reports. C-Lock also sells a machine that vacuums up cows’ breath and measures its methane content.

In one quirky solution, researchers in Argentina have developed backpacks for cows that collect the cows’ gaseous emissions. Theoretically, such gas could be a power source. But collecting cow methane on a large scale is “totally improbable,” Jorge Antonio Hilbert, a researcher with Argentina’s National Institute of Agricultural Technology, told Financial Times. The backpacks are mainly for measuring cow emissions, as Popular Science reported in 2008.