Get to Know The Chinese Warships That Just Arrived in Hawaii

On June 24, the combined Brueni-China-Singapore-U.S. naval taskforce finally reached Honolulu after a week long voyage across the Western Pacific.... 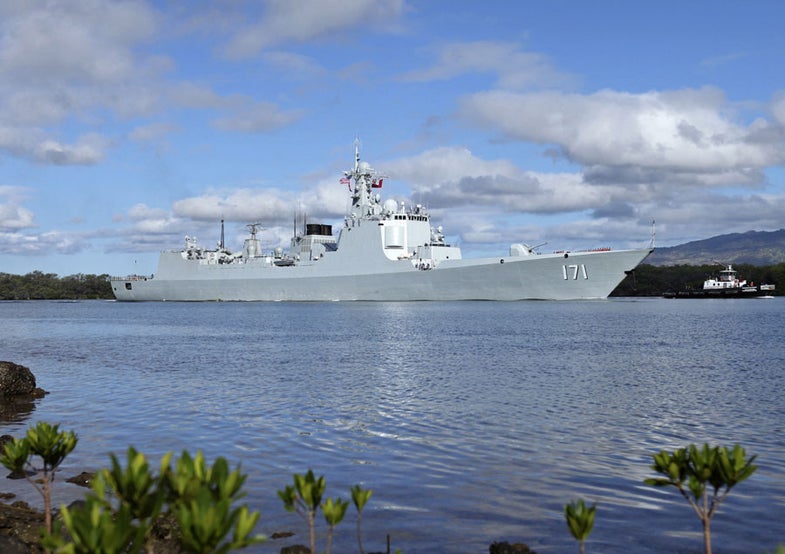 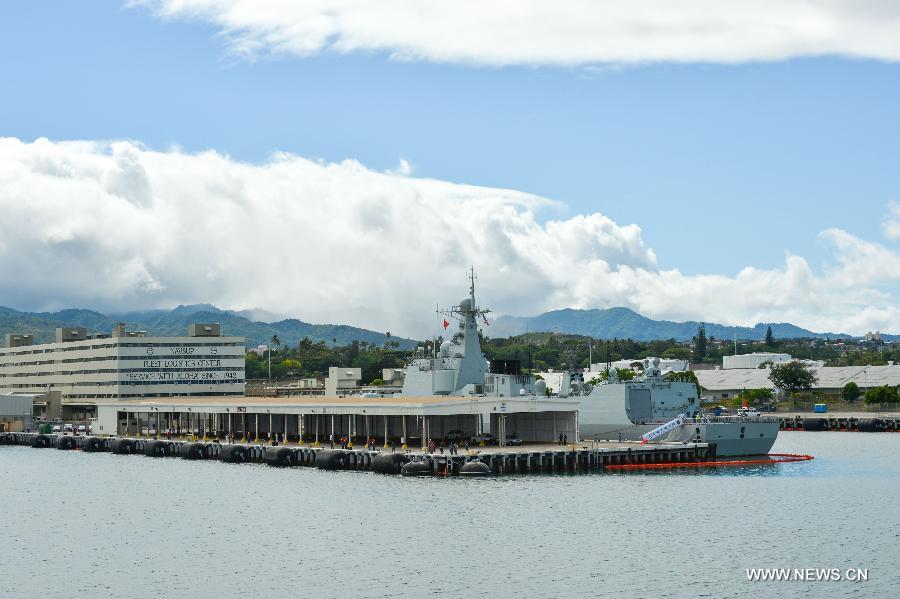 Haikou, DDG 171, docks at Joint Base Pearl Harbor Hickam in Honolulu, Hawaii. Haikou is the flagship of the first ever Chinese delegation to RIMPAC.

On June 24, the combined Brueni-China-Singapore-U.S. naval taskforce finally reached Honolulu after a week long voyage across the Western Pacific. This is the first time that People’s Liberation Army Navy (PLAN) warships are participating in RIMPAC, the U.S. hosted biannual naval exercise. The PLAN warships are expected to take part in the maritime security/antipiracy, and search and rescue exercises. China also brought two Ka-28 helicopters and a platoon sized unit of naval commandos. 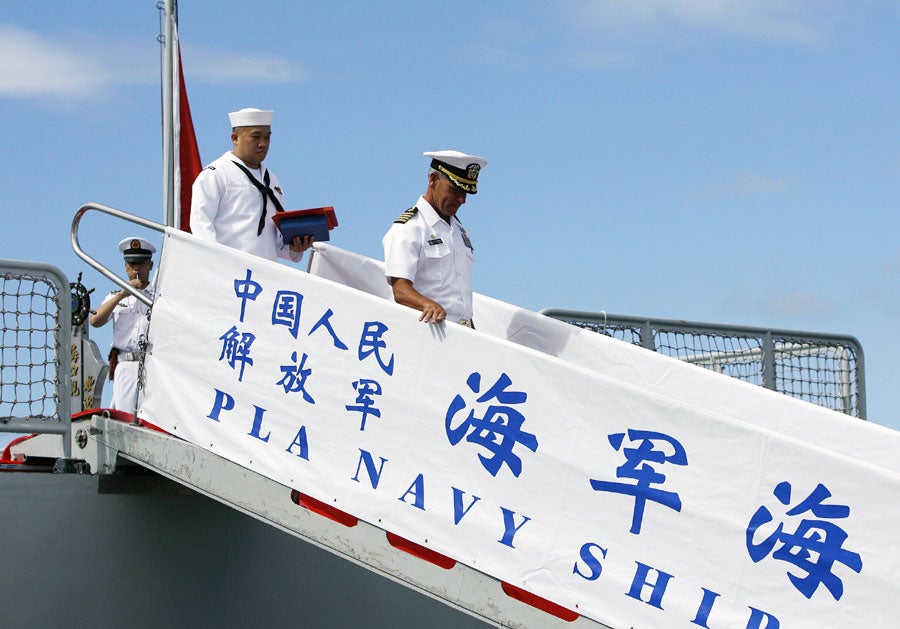 USN Captain Jeffrey W. James, commander of Joint Base Pearl Harbor Hickam, is given a tour aboard the PLAN’s Type 052C DDG Haikou.

Type 052C Haikou is a 7,200 ton guided missile destroyer (DDG) armed with a 100mm cannon, 48 long range surface to air missiles (SAM) and 8 YJ-62 anti-ship missiles (AShM). Haikou also has four Type 346 phased array radars to detect air and surface targets in a 450km radius, including stealthy aircraft and anti-ship missiles. The Type 052C is one of China’s most modern surface warships; their main mission is to defend ships like the aircraft carrier Liaoning against multiple air and missile attacks. However, it is currently being superseded by the newer, more capable Type 052D class DDG. 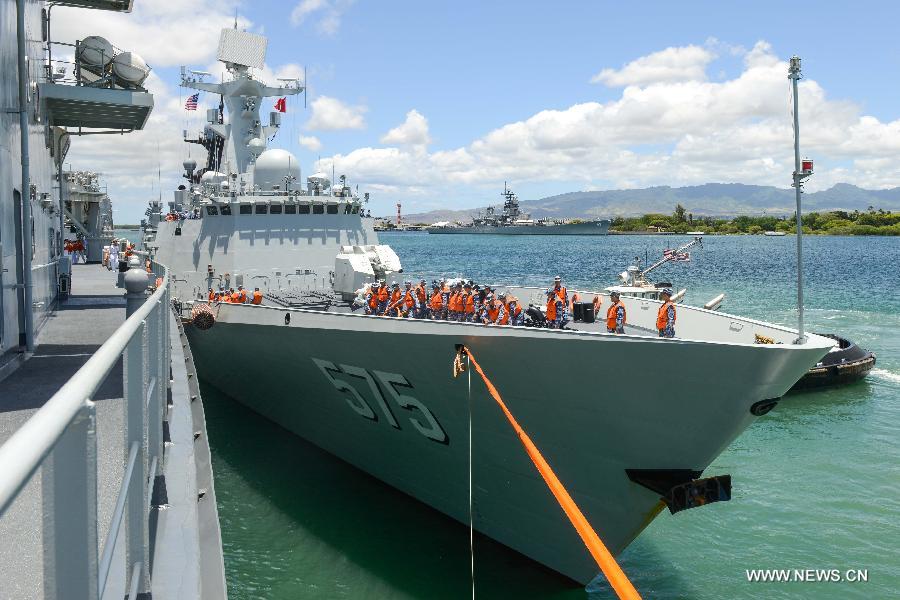 The Type 054A Frigate Yueyang docks at the Joint Base Pearl Harbor Hickam in Hawaii, right before the start of RIMPAC 2014.

Type 054A Yueyang is a 4,000 ton guided missile frigate (FFG) carrying a 100mm cannon, 32 medium range SAMs and 16 YJ-83 smaller AShMs. The Yueyang is optimized for less intensive fleet air defense duties, as well as anti-submarine warfare missions. While not as capable as the Type 052C, the Type 054A frigates are cheaper to operate, making them ideal for military operations other than war, like anti-piracy operations in the Gulf of Aden and helping to evacuate Chinese civilians from Libya during the 2011 Libyan Civil War. 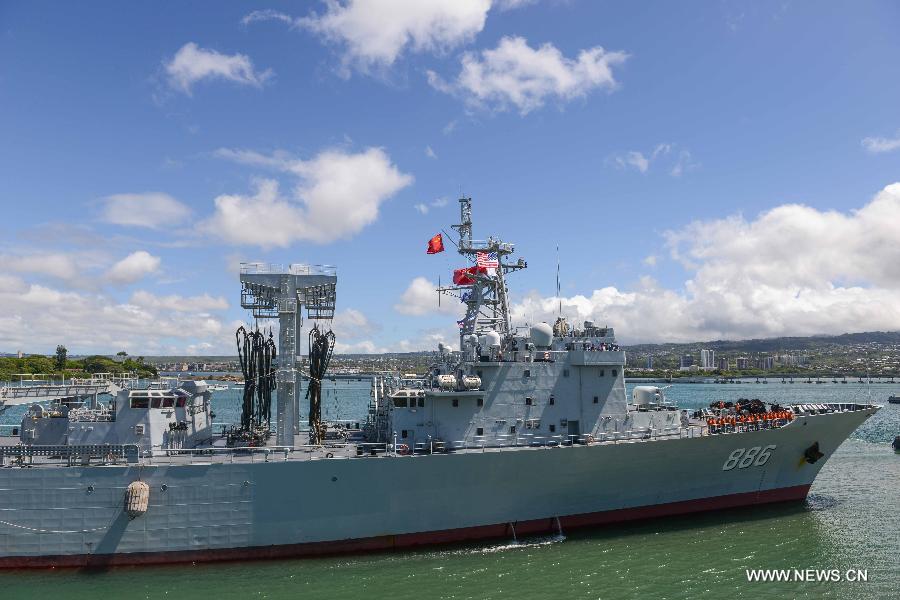 The Qiandaohu naval replenishment and refueling ship accompanied the PLAN taskforce to RIMPAC. She will have her work cut out for her to refuel the PLAN during their three month voyage.

886 Qiandaohu Fleet Replenishment Ship is a modern naval logistics ships. Fleet Replenishment ships are becoming a vital part of Chinese blue water expeditionary operations. For long voyages like the Hainan-Hawaii route, the Qiandaohu refuels the Haikou and Yueyang by attaching fuel transfer hoses to transfer up to 10,000 tons of fuel. The Qiandaohu also resupplies PLAN ships with food, ammunition and spare parts.

New Chinese 052D Destroyers, 3 in a Row at a Shipyard