Entombed in amber, this tiny crab hails from the age of dinosaurs

The tiny fossil offers valuable evidence about how early crabs left the ocean. 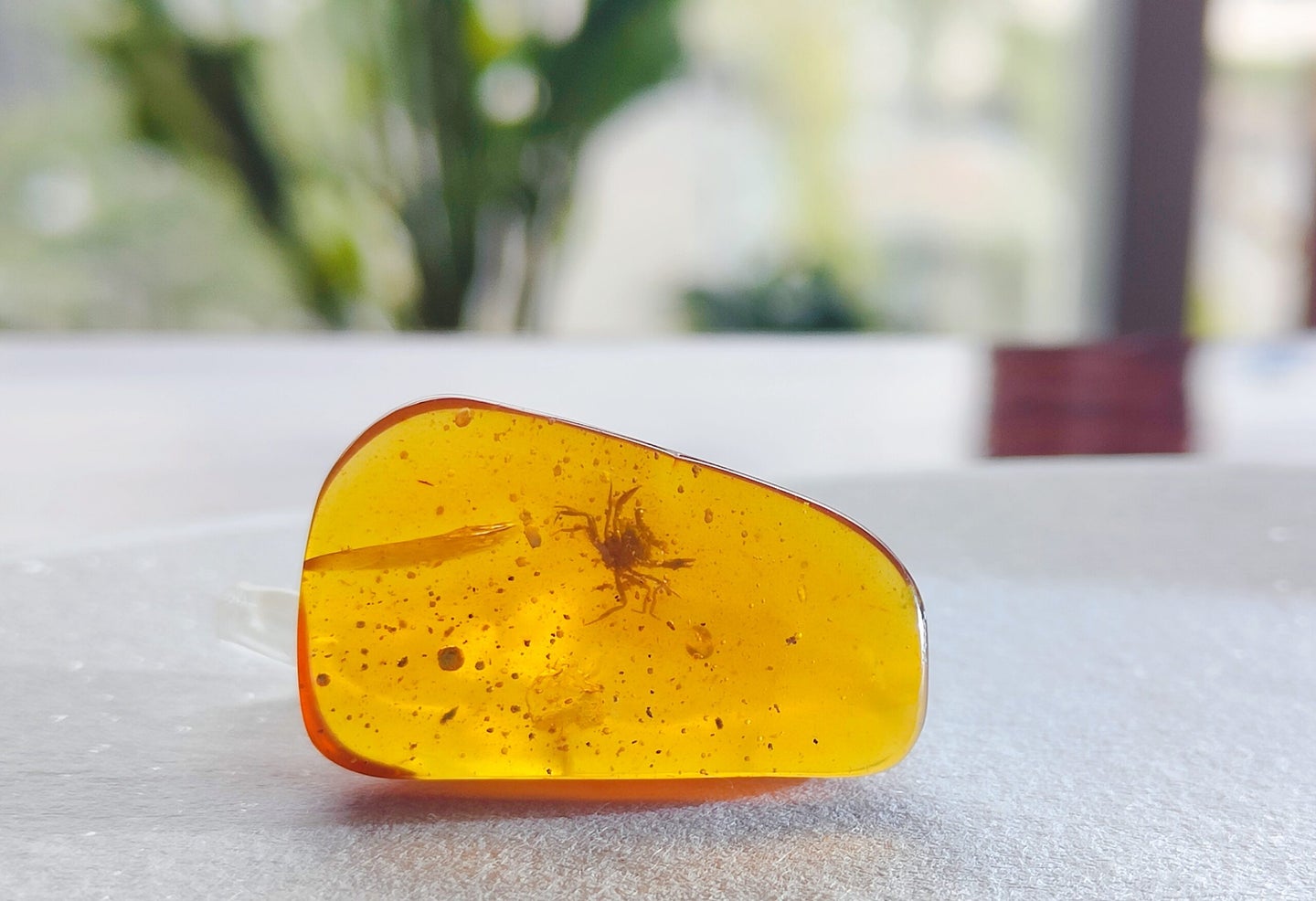 Nearly 100 million years ago in present-day Myanmar, a tiny crab got lodged in tree resin and was likely entombed while still alive. While unfortunate for the crab, this situation has given scientists a rare glimpse of a time when the ancestors of today’s crustaceans were first leaving the ocean.

The specimen not only represents a new species, but it’s also the oldest crab to be found preserved in amber, the researchers reported on October 20 in Science Advances. The crab’s gills indicate that it was aquatic or amphibious, and that ancient crabs ventured onto land and freshwater environments earlier than the sparse fossil record has previously shown.

“This is the first crab of the dinosaur era trapped in amber,” says Javier Luque, a paleobiologist at Harvard University and coauthor of the findings. “And because it’s trapped in such an exquisite way, it is the most complete crab ever discovered, to the level of not missing a single hair.”

Crabs have existed for over 200 million years, he says. However it was during the Cretaceous Period, which ran from 145 million to 66 million years ago, that the crustaceans really hit their stride. During the so-called Cretaceous Crab Revolution, the group diversified, traveled around the world, and began to play a major role in the ecosystems they settled in.

Today’s crabs are a diverse bunch, ranging in size from less than an inch to 12 feet across. Some dwell in the ocean, while others live in brackish or freshwater and even on land.

Early representatives of the group departed the sea to conquer these terrestrial and aquatic habitats on multiple separate occasions. Based on the genetics of living species, scientists estimate that nonmarine crabs split off from their relatives around 130 million years ago. However, there are few fossils to document this transition; the oldest-known claws and upper shells, or carapaces, of freshwater and terrestrial crabs are roughly 75 million to 50 million years old.

The unlucky crab that Luque and his team describe in the new paper was among a batch of amber pieces initially collected by miners and later acquired from a mineral store in China by the Longyin Amber Museum in Yunnan Province in 2015. The researchers examined the fossil under the microscope and used a technique called micro-CT scanning to create three-dimensional digital reconstructions of the crab’s body.

They saw that the exceptionally preserved fossil included delicate features such as antennae, large compound eyes, mouthparts covered in fine hairs, and at least six pairs of gills. “Those soft tissues are really hard to preserve,” Luque says. “They’re among the first to decompose and degrade.”

The lifelike position and complete nature of the fossil hint that the crab was alive and struggled to escape when it became engulfed in resin, he adds. The specimen was smaller than most other living or extinct crab species, with a carapace measuring 2 millimeters (0.08 inches) wide and a leg span of 5 millimeters (0.20 inches). It’s unclear whether this crab, which the researchers named Cretapsara athanata, was partially grown or simply a very petite adult.

The earliest crabs were very different from those alive today, and their appearance was “mostly something in between lobstery-looking and crabby-looking,” Luque says. C. athanata, however, has several features in common with present-day crabs, including the shape of its carapace and long legs. “For a second I couldn’t believe my eyes,” Luque says. “It looks so modern in many ways.”

The fossil suggests that this familiar crab body plan was already present in the mid-Cretaceous, when many of the ancestors of modern crabs emerged, he says.

Luque and his team also noticed that C. athanata lacked the spongy lung-like tissue that is found in land crabs. They speculate that the ancient crab lived in brackish or freshwater settings near the coast, or perhaps moved between land and water. It may have lived in shallow pools of water on the forest floor or even in the moist hollows of trees.

It’s possible that C. athanata had a lifecycle resembling that of the land-dwelling Christmas Island red crab, which travels to the coast to release their larvae into the ocean. A few weeks later, the young crabs return to the shore en masse and eventually migrate inland.

It’s difficult to determine C. athanata’s lifestyle from a single specimen trapped in amber. Still, as the oldest nonmarine crab yet to be discovered, C. athanata fills in a gap in our understanding of how crabs began moving into terrestrial and freshwater environments, Luque says. This challenging shift has only been undertaken a few times across the animal kingdom.

“It is incredible that crabs alone have done it 12 times in the last 100 million years,” Luque says. “Evolution did something well with these crabs that’s allowed them to go to places that none other of their relatives have before.”