A lot of information came out this week. Here are the important sections in easily-digestible chunks. 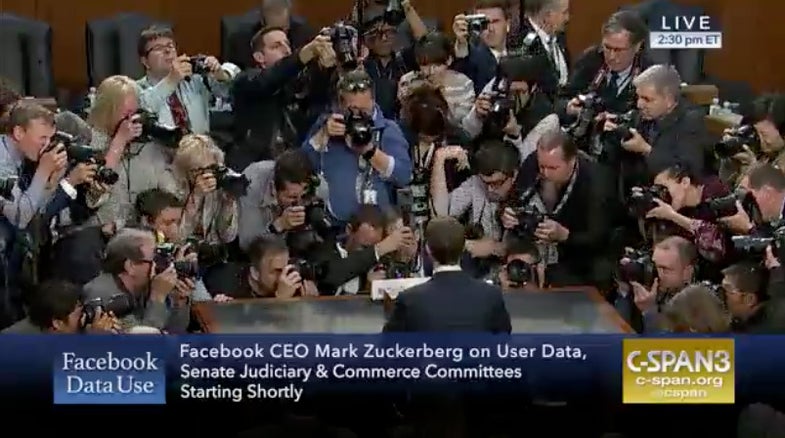 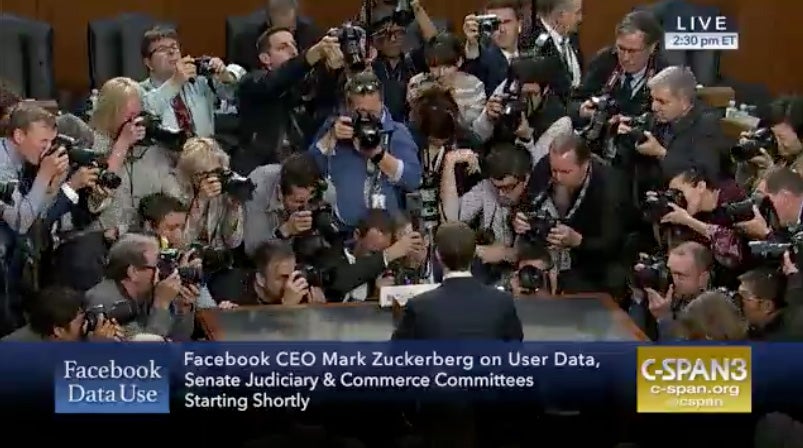 Don’t worry if you didn’t catch all 11 hours of testimony. We’re here to help.

Over the past two days, Facebook CEO and controversial-haircut owner Mark Zuckerberg spent roughly 11 hours testifying in front of Congressional committees, answering questions from nearly 100 officials. The hearing covered everything from the Cambridge Analytica data debacle and Russian election interference to fundamental questions about Facebook’s business model. Despite the hearings’ marathon length, we didn’t actually get that much new info regarding Facebook and how it treats its 2 billion monthly active users. Here’s everything you need to know from those 11 hours compressed into easily digestible chunks. Before we get started, here are some links:

Nearly everyone has a crazy story about how Facebook “heard” them talking about a product and then served them ads for it. While it’s interesting to consider the possibility of the social media app listening to every word you say, Mark Zuckerberg flatly denied it during both days of his testimony. There are also some considerable technical challenges that would go with something like that.

Part of this hearing was to determine exactly how to categorize Facebook as a company. Mark Zuckerberg was careful to point out that he sees Facebook as a technology company that builds tools for other people to use, and not itself a publisher or media outlet. The tricky part is that sometimes Facebook does make its own content, including videos for its Watch platform. Expect to hear a lot about this in the future as the government tries to figure out just how to regulate the social media platform. Still, it was notable that Zuckerberg said Facebook takes responsibility for the content that appears on it.

Other companies have the Cambridge Analytica data, including Eunoia

We knew before the trial that the 87 million user dataset acquired by Cambridge Analytica also fell into other hands, but we didn’t know who. Zuckerberg didn’t give a lot of specifics about who else has the info, but he did confirm that there are others, one of which is Eunoia, a company involved with Christopher Wylie, the former Cambridge Analytica employee who blew the whistle and kicked all of this off in the first place.

Facebook has considered pay options, but still thinks the ad model is the right model

Some officials demonstrated a rather rudimentary level of technological literacy, which resulted in Mark Zuckerberg explicitly explaining how Facebook’s ad-driven model actually works. Several questions harkened back to a prior comment from Facebook COO Sheryl Sandberg that suggested the company could allow people to pay to opt out of targeted advertising. Zuckerberg, however, remained committed to the ad-supported model for all users. It doesn’t sound like we’re getting a paid Facebook subscription any time soon.

In a hearing like this, there’s a heavy focus on semantics. One of the most contentious points on both days was the idea of Facebook “selling data.” While the social network doesn’t directly accept money to provide data about users, it does allow advertisers to target people based on their interests. And until the end of March, Facebook worked directly with data brokers to help target users more efficiently. You can read an in-depth look at that here and also find out how to see a list of all the advertisers that have specifically targeted you. There are probably some surprises in there.

GDPR is coming and Facebook thinks “parts of it” are good

Expect to hear more about the EU’s General Data Protection Regulation, especially as we get closer to its implementation at the end of May. It’s a sweeping set of regulations regarding how technology companies have to treat users and their personal data in European Union countries. Facebook is currently preparing for the change, but it’s still a little unclear if the United States will get all the same protections on Facebook that Europeans will get. Mark initially seemed to say yes, but when faced with the question again on the second day, his answer was cagier.

There’s a very good FAQ on the GDPR site that will give you an overview of what’s happening with it.

This is one of the most complicated things that Facebook does and, even with nearly 100 people to question him, officials seemed to have a hard time nailing this down. The short version is: Yes, Facebook tracks people who aren’t logged into Facebook and even people who don’t have an account. According to Zuckerberg, this is to help them target ads for people who do have accounts, and prevent those who don’t have accounts from trying to scrape public information that’s associated with Facebook users.

This happens via Facebook technology like those “like” buttons you see on web pages, or an invisible version called the Pixel, which doesn’t show up on the site, but still helps the company collect information. Using browser cookies and app integrations, Facebook knows where you go around the web and uses that data to observe and analyze your behavior.

As Zuckerberg pointed out many times, it’s technically possible to opt out of this, but it’s not easy to parse all of the settings you need to change in order to do so. The Atlantic has a solid explainer about this exact issue that’s worth checking out.

Facebook thinks AI is the solution to pretty much everything

One of Zuckerberg’s biggest talking points about security is that Facebook is hard at work on AI-powered tools to try and cut down on the amount of bad stuff that shows up in people’s groups and streams. According to the CEO, this tech is already working well for its anti-terrorism unit, which he says catches 99 percent of terrorist-related content immediately. Still, it seemed that the mere mention of AI tech was enough to satiate many of the officials, many of whom seemed woefully unprepared to ask any kind of specific follow up question about the technology.

Several officials brought up the fact that the 2012 Obama campaign also successfully gathered and leveraged user data, which sounds similar to what happened during the 2016 election. Zuckerberg, however, clearly stated that the actions that happened in 2012 were within the rules of the platform, while the Cambridge Analytica scandal was a clear violation of the terms of service.