Tips and tricks to help you take better smartphone photos 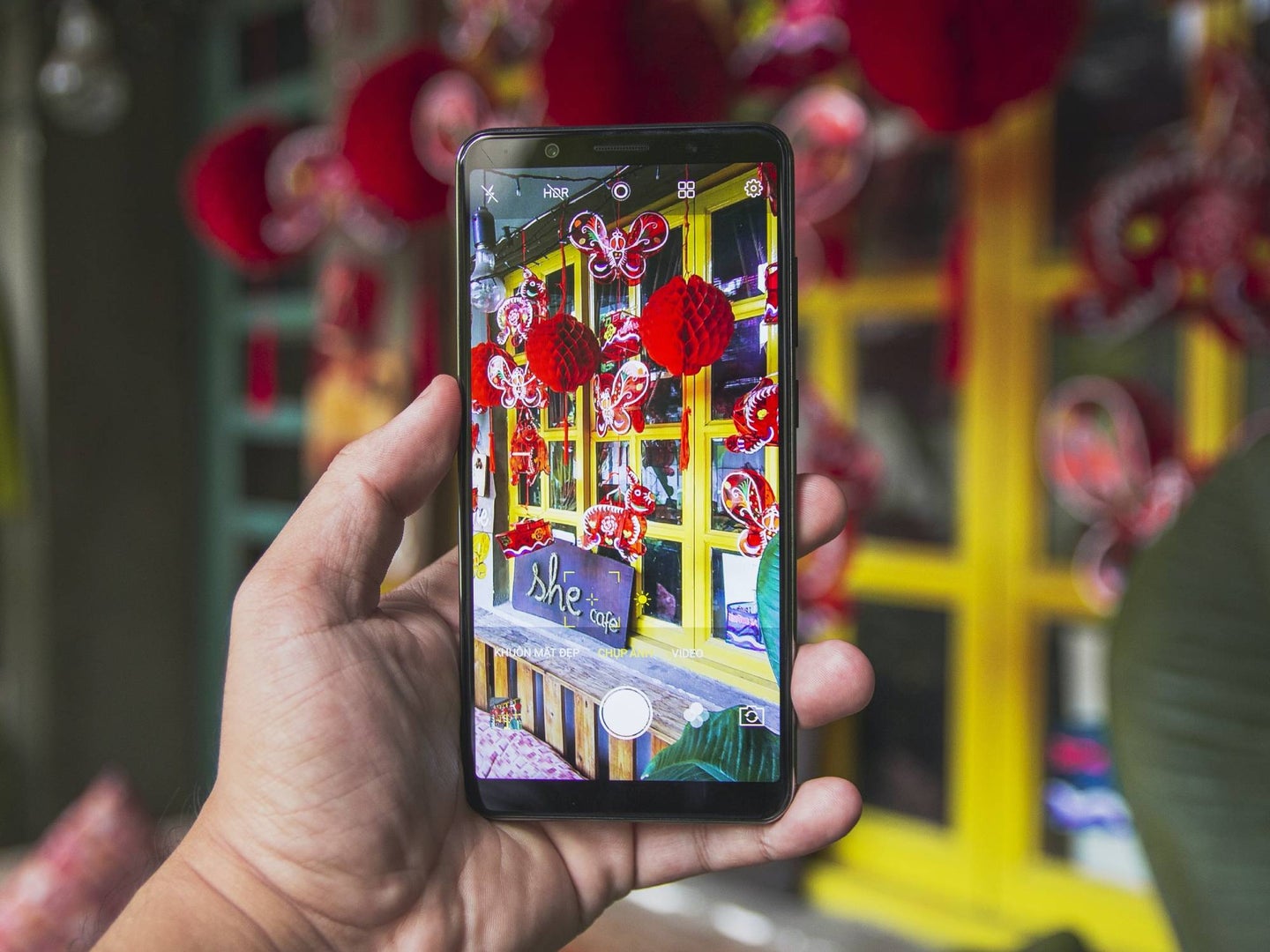 Get the best shots you can anytime, anywhere. Taan Huyn / Unsplash
SHARE

By now we’re all familiar with the basics of smartphone photography: You pull out your phone and push a button. But if you really plan to preserve those memories for posterity, then you’ll want your phone snaps to look their best. So up your phone photo game with these nine tips and tricks.

Camera settings, lighting, scene modes, and composition can all play a part, as we’ll explain. And when you’ve got your photos looking suitably fantastic, make sure you also take the time to back them up somewhere safe. 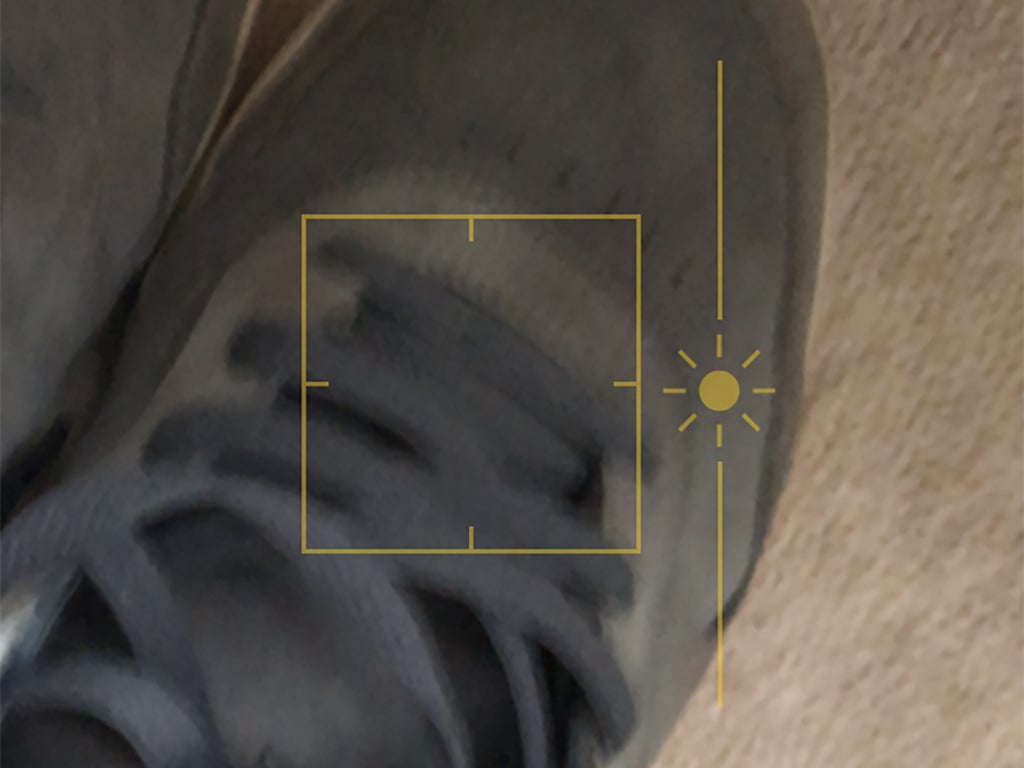 Smartphone cameras have come a long way in a short time, and most handsets now give you some control over the focus and exposure of your shot. If manual focus is available, it’s usually activated with a tap on the screen, on the point where you want the camera to focus.

Check in the settings for your phone’s camera app too. If you find a face recognition option, it’ll automatically zero in on faces, helping you avoid shots where your friends’ faces are a blurred mess.

Then there’s the exposure, or how much light is allowed into the frame. In the default iPhone camera app (shown above), you can tap once to focus, then hold and drag to adjust the exposure. It’s a similar story in the camera app for stock Android: Tap once for focus, then you can adjust exposure via the slider that pops up at the side or top of the screen. For more tips on nighttime photography, check out this guide to capturing celestial objects in the night sky. 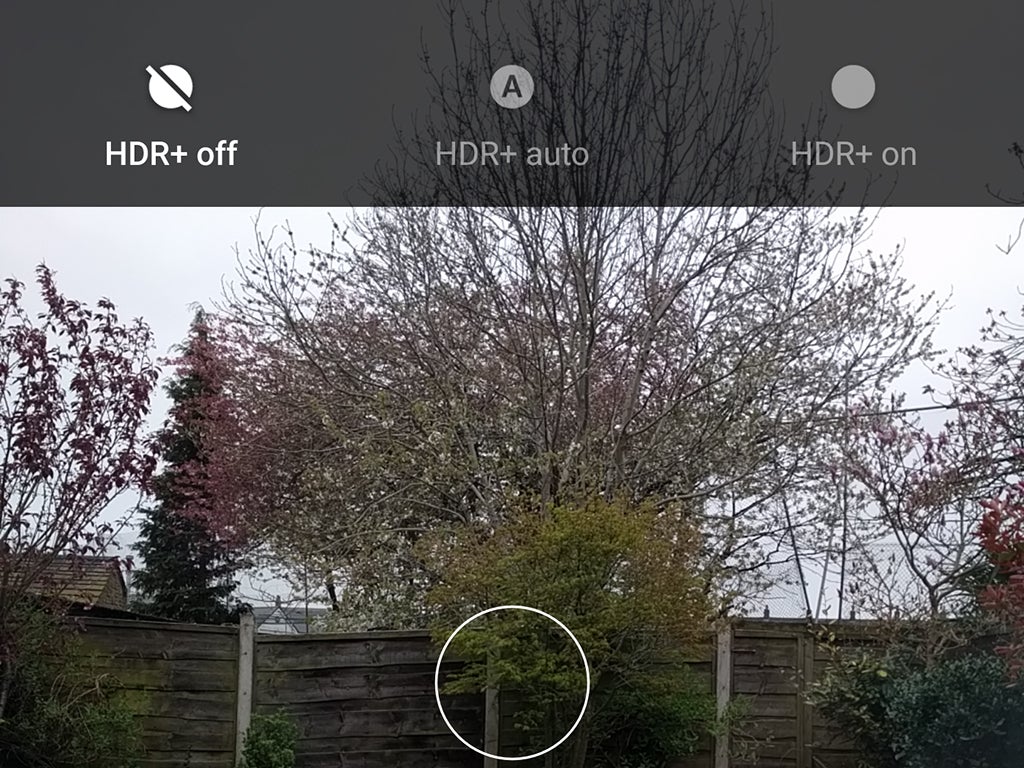 Make use of HDR

HDR, or High Dynamic Range, is now a staple feature for smartphone camera apps. Simply put, it brings detail out of the darkest and lightest parts of your picture and creates a better balance of colors overall. The downside is that, in HDR mode, photos take a little longer to process while your smartphone works all this out.

It’s particularly suitable for landscapes and portrait shots, especially when there’s a wide range between the darkest and lightest parts of your photo. As it takes a few milliseconds longer to take a snap though, you should avoid using it on fast-moving subjects or when you can’t keep your phone steady.

Whatever your make and model of phone, you should see “HDR mode” in a prominent place somewhere on screen. It’s also likely that you can set this to automatically kick in (as on stock Android, above), which means HDR mode will activate whenever the camera senses it could be useful. You can also turn HDR mode on and off manually. 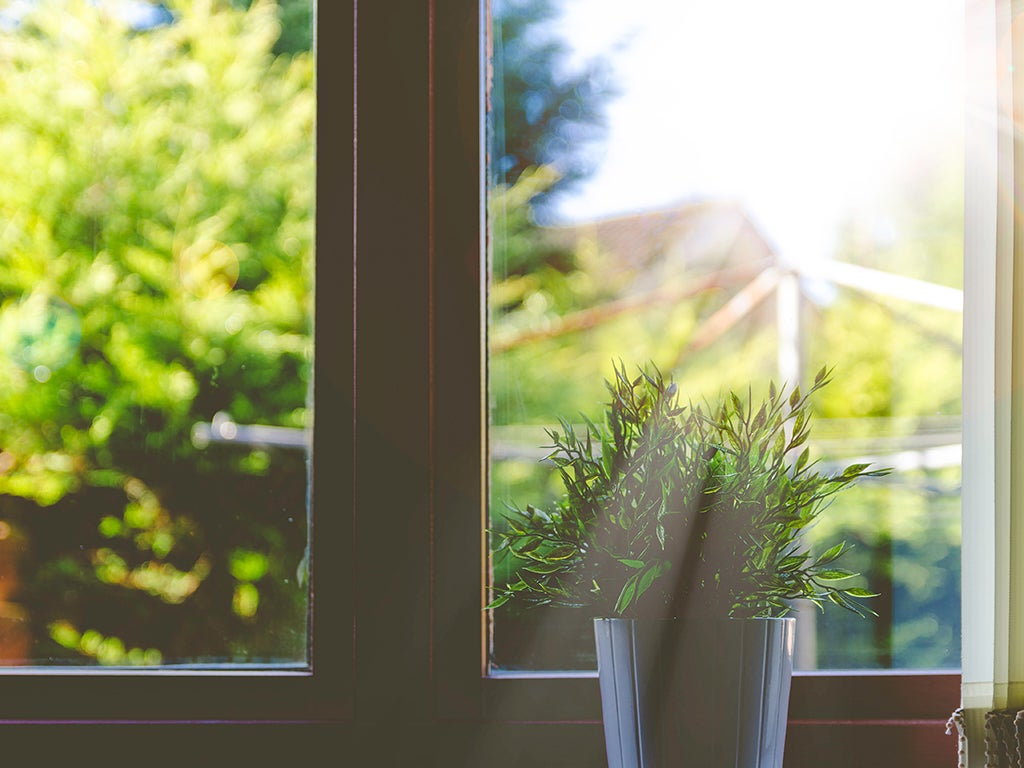 Use natural light where possible

Soak in that natural light

Use natural light where possible

Light is one of the most important factors in any photo. If you can make use of the available natural light, then you don’t have to resort to your phone’s built-in flash (which may give you less-than-ideal results, particularly at a distance).

If you can, position your subjects so they’re well-lit from the front and not silhouetted by a strong light from behind. Of course, this isn’t always possible for quick shots, but do what you can.

Using artificial light can work too, though you need to take more care. In a night scene, for example, get your friends to stand closer to the glow of artificial lights rather than deeper in the shadows, and make sure their faces are as well-illuminated as possible. Using the flash can help, but if you have time, try one shot with flash and one without to see the difference. 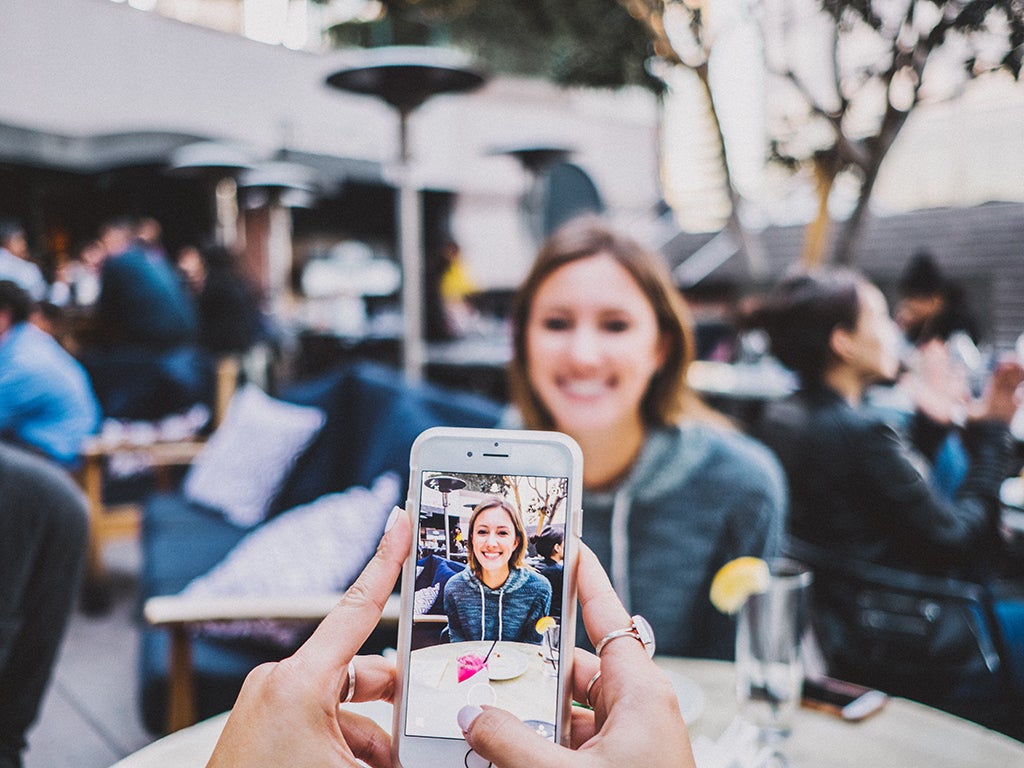 One area where smartphone snappers still lag behind dedicated cameras is in their sensitivity to movement. Even a slight shake can leave a smartphone photo looking like it was taken on a rocking boat, while a more professional DSLR copes better with this type of motion.

It’s therefore important to minimize camera shake as much as possible. Buying a tripod might seem like overkill, but you can pick up cheap, small tripod models that are made specifically for smartphones.

If you don’t want to get a tripod then use whatever’s available—a wall, a friend’s shoulder, or even your other arm. Keeping the shot steady is particularly important in low light conditions, when exposure times have to be longer. 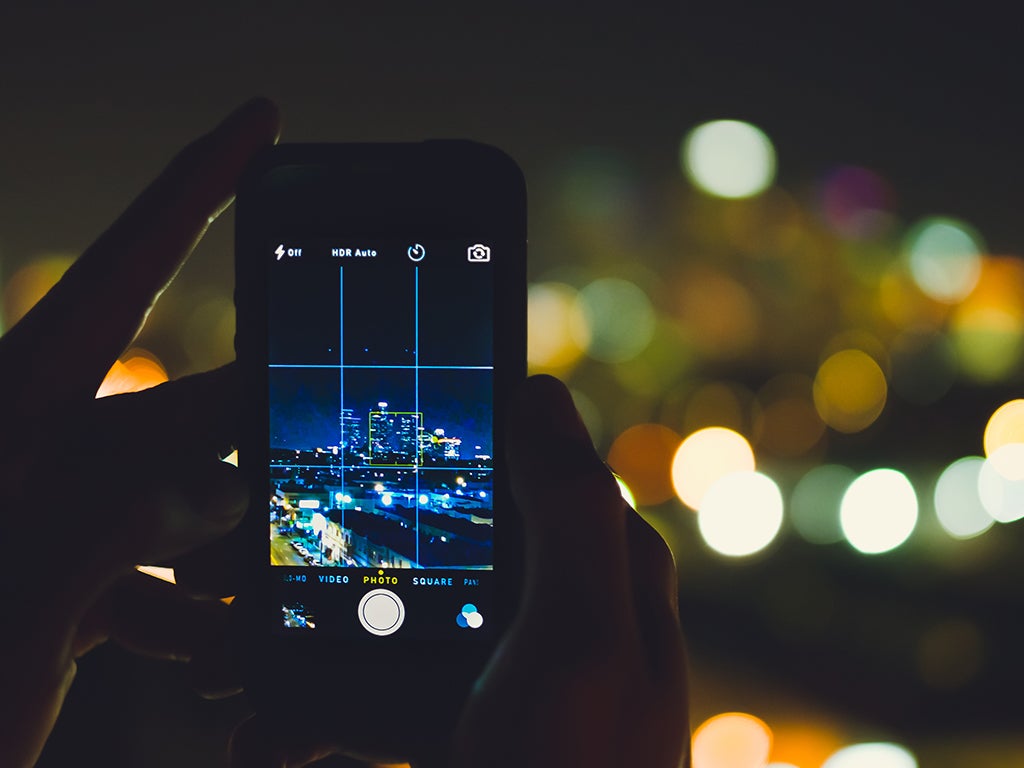 Apply the rule of thirds

The rule of thirds splits a photograph into nine blocks

Apply the rule of thirds

This is an old photography trick that’s been around for years, but you can still apply it to smartphones. According to the rule of thirds, an image is split into nine equal blocks that form a three-by-three grid (like in the image above). You should aim to get the most interesting parts of your image (like a treeline or a group of faces) near the corners of these segments, where the imaginary gridlines meet.

To improve your shot composition, give the rule of thirds a try. Whether you’re taking pictures of friends at a bar or working on a landscape shot, you’ll find it simple and effective.

It’s even more simply when you don’t have to imagine the dividing lines yourself. This being the age of instant smartphone photography, just about every camera app out there will display them for you. On the stock Android camera app, you’ll see the grid icon at the edge of the screen, while in iOS the grid option is under Photos & Camera in Settings. 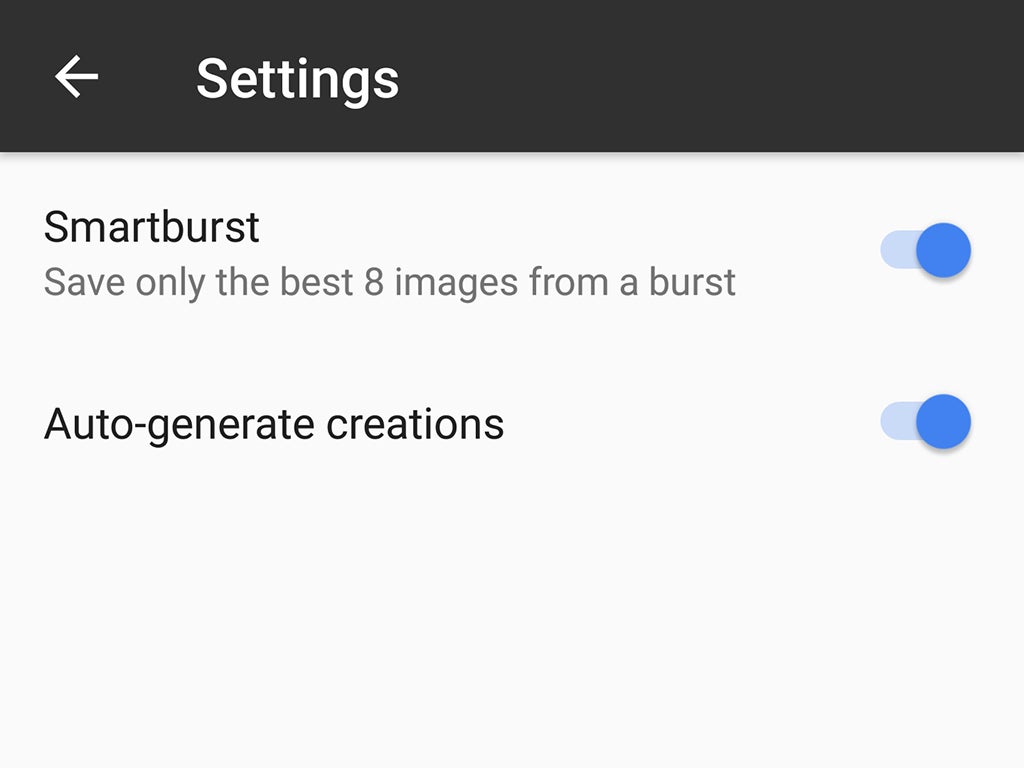 The days of waiting for your film to get processed and developed before you can see your photos are long gone. Take advantage of our brave new world of instant photography by firing off as many shots as possible. Then, you can review your images after the event and delete all but the best ones.

Most phones come with a burst mode for this very purpose. On both iOS and (stock) Android, you activate it by holding down the shutter button in Photo mode. You can dive into the camera settings to make changes to how burst mode works.

Third-party camera apps often have a burst mode too. It gives you a useful range of different pictures to choose from, and can prove handy in pretty much any situation, from casual family shots with your blink-prone cousin to wildlife photos. 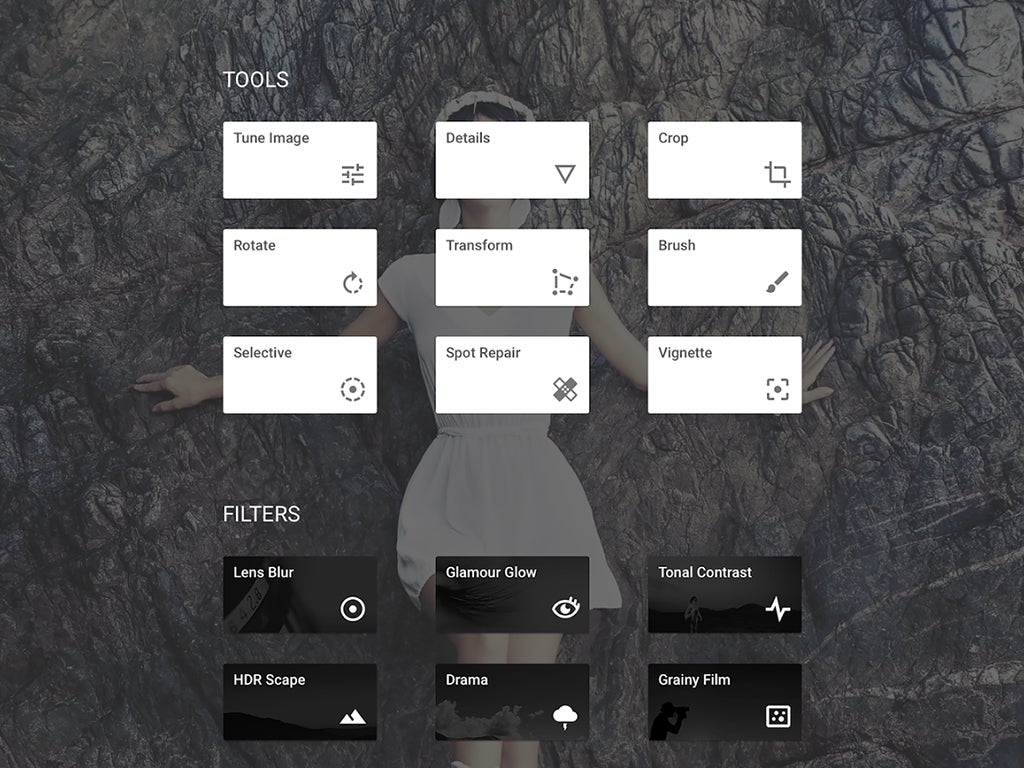 Edit images on the go

Remember to edit your images

Edit images on the go

Getting good pictures from your phone doesn’t start and end with your camera app of choice. You can also add a photo editing app to the mix to tweak your shots before sharing them with the wider world.

You’re spoiled for choices in this department. In addition to the native photo gallery and editing apps supplied by Apple and Google, alternatives such as Snapseed (above), Adobe Photoshop Express, and VSCO can do wonders with your pictures. Adobe is even incorporating AI into their photo editing apps.

You can add filters, tweak colors, straighten images, and more. Also keep an eye out for the “one touch” fixes that enhance your pictures with minimal effort from you. Some image editing apps import photos taken by your camera, while others have an integrated camera component of their own. Which brings us on to our next tip… 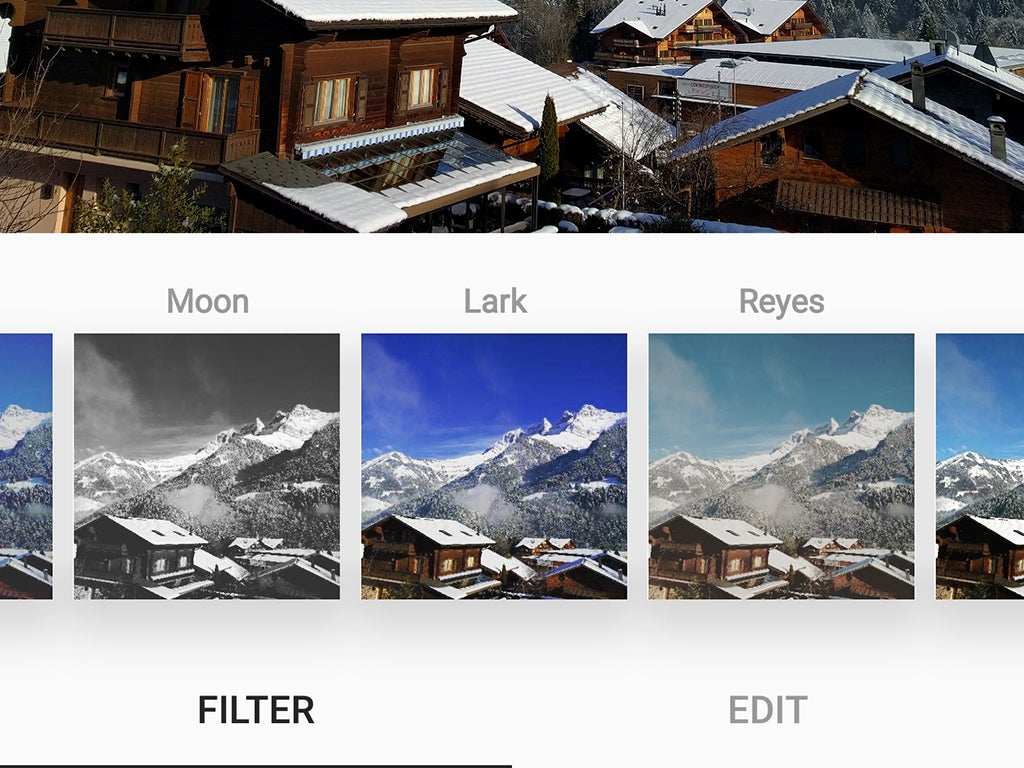 If you’ve never ventured beyond your phone’s default camera app, then you might be surprised at just how many third-party alternatives are out there. They give you access to extra settings, different features, and bundles of filters to get your mobile photos looking their best.

Take Manual for iOS, for instance, which lets you control shutter speed, ISO, white balance and more. Afterlight for iOS and Android gives you access to a similar set of pro tools, together with a bunch of impressive filters.

Speaking of filters, Instagram for iOS and Android (above) isn’t just a social network. It can also turn your shoddy photos into works of art with a couple of taps. The app now includes a host of editing and tweaking tools besides the filters it’s famous for, making it one of the best photo-taking apps you can get. 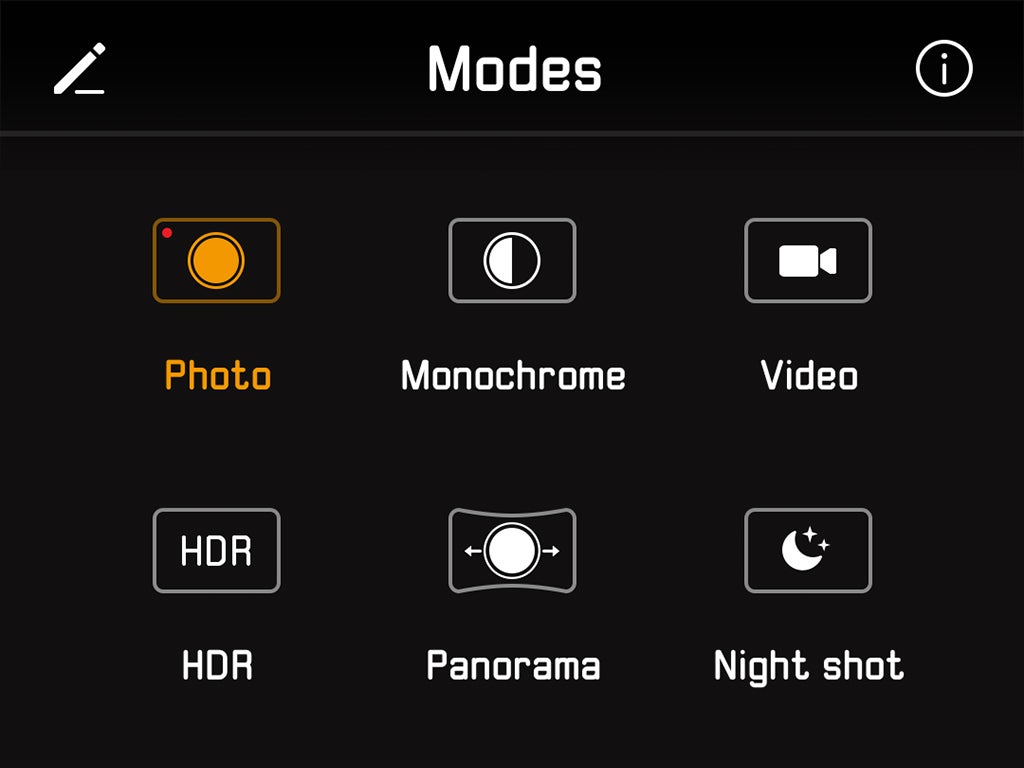 Explore the settings of your default app

Even with plenty of third-party camera apps to pick from, it’s worth exploring everything the default app on your phone has to offer. If you’re on iOS, the built-in camera comes with a selection of live filters you can choose from (tap the icon in the top-right corner to see them). And if you’re using an iPhone 7 Plus, then you can swipe across to the Portrait mode for an instant depth-of-field effect (where the subject remains sharp but the background is blurred).

On Android, the camera app you’ve got will vary depending on which manufacturer made your phone. The stock Google Camera app has a very useful lighting filter available via the thermometer icon. You can choose from presets including cloudy and tungsten, so you can get the colors looking just right no matter what type of light you’re dealing with.

Meanwhile, default camera apps from Samsung, LG, Sony, Huawei (above), and others include a variety of extra scenes and tools to play around with. On newer Samsung handsets, for example, you can tap the Mode button to bring up a Pro mode packed with filters and adjustments for color and contrast that can be tweaked even before you take your shot. So open up your app, and do some exploring.