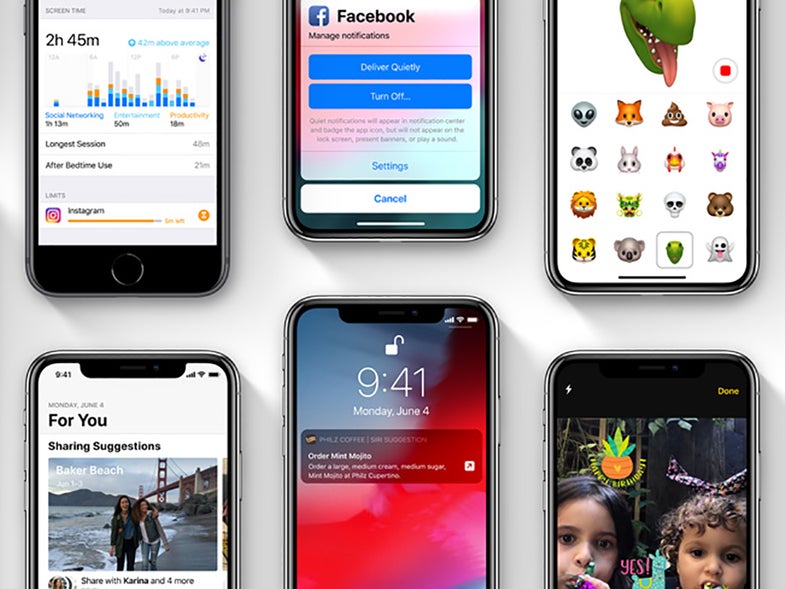 If you keep an eye on the Apple news cycle, you already know that iOS 12 is on its way. Due for a full launch in September, the latest version of this mobile operating system comes with a variety of new updates and features. Highlights include improved password management, better photo organization, a smarter Siri, and new augmented reality (AR) apps.

But you don’t have to wait months to give your iPhone these abilities. You can duplicate many of them right now, often for free, with existing apps. Here’s how to access the best features of iOS 12 before the software officially arrives on your phone.

When it comes to group video calling, Apple is kind of late to the party—other apps have had this ability for years. That means you can use them to replicate the iOS 12 update that lets FaceTime host group chats with up to 32 participants. These options may not mesh with iOS as well as FaceTime does, but they do offer a pretty much identical set of features.

For their quality and stability, we would recommend Houseparty (up to 8 participants), Google Hangouts (video calls with up to 25 participants), or Skype (up to 25 participants). Houseparty, which is more chilled-out and social, matches FaceTime’s simplicity, and it works best if you’re just planning to hang out with friends. The other two offer extras like text chats and file transfers, which optimizes them for more professional applications. You can download all three of them to iOS for free (minus your data costs) right now.

As another treat, Apple is improving your ability to manage passwords in Safari. Updated versions of the web browser, for both macOS Mojave and iOS 12, will soon generate and remember passwords for you, and warn you when you’re using the same code to log in to multiple accounts.

Those are features we’ve come to expect from the best third-party password managers—which are already available on iOS. We like 1Password, LastPass, and Dashlane. All three make it easy to manage an unlimited number of passwords by remembering your log-ins, generating strong passwords from scratch, and reminding you not to duplicate your credentials across more than one account. In terms of polish and features, not much separates the apps. Only Dashlane offers a free version, which lets you download the app to a single phone or computer; to add more devices, you have to upgrade to a premium plan that costs $3.33 a month. 1Password plans start at $3 per month and LastPass ones at $2 per month.

The animated cartoon characters known as Animoji are already available on the iPhone X, and iOS 12 will introduce more of them, as well as adding Memoji—customizable 3D avatars you can design to look like you—to the mix. Both types of avatar will match your facial movements, such as smiles and winks. You can use them instead of your own mug in video chats, or record short clips to share later. Third-party apps can’t offer exactly the same tricks, but they do have a few fun substitutes—and unlike Animoji and Memoji, you can use them even without an iPhone X.

For example, Snapchat’s Bitmoji app introduced the concept of avatars you tweak to look like you. First, you create your own personal emoji, with hair, fashion choices, and facial features that match your own. Then you can open Snapchat to add your avatar to video messages and pictures.

Snapchat, and its competitor Instagram, also include a number of photo and video sticker effects that more or less match what Apple is adding to iOS 12. Both apps let you plaster your images or clips with filters and stickers, from putting bunny ears on your head to raining down a shower of hearts.

Take control of your screen time

One of the Apple’s best new iOS 12 features is the Screen Time app. It monitors how much time you spend glued to your screen, tracking how often you unlock your phone and the minutes you spend in each app. Plus, it lets you set limits on how long you use certain apps, although you can override these controls fairly easily. Even without the new app, several existing iOS programs aim to help cure your smartphone addiction.

RealizD, for example, does almost exactly the same job as Screen Time. It logs your phone usage, breaks down the data into helpful charts, and limits your access to particularly time-consuming apps. The basic version is free, while upgrades, which cost $2 and up, give you more ways to gather and analyze your data.

The updated Photos app will gain a slew of new features in iOS 12. These include a “For You” tab, which automatically assembles highlights from your library; sharing recommendations, based on the people Photos identifies in your pictures; and support for more complex searches, so you can sift photos by location, date, event, and keyword.

Well, you can already get pretty much all those features in Google Photos, including sharing suggestions and highlight collection (via the Assistant). Even better, you don’t have to pay for any cloud storage space, because Google gives you unlimited room—as long as it can resize your pictures down to 16 megapixels and your videos down to 1080p.

Deciding which app should store a lifetime of photos is a big decision. So you should consider multiple factors, including which devices work well with the app and what privacy settings are available. That said, until iOS 12 arrives, Google’s rival app is still a better bet than Apple Photos.

We’re very much looking forward to the Siri Shortcuts feature in iOS 12, which lets you configure multiple responses to a single Siri command. For example, if you tell Siri you’re heading home, you could have the AI assistant respond by texting your partner an update, turning up the smart thermostat in your house, and enable Wi-Fi on your phone all at once.

Before iOS 12 arrives, you can start playing around with this type of function on Workflow. This app helps you build packages of automated tasks that launch at your bidding. Since Apple bought it in 2017, it’s a good guess that Workflow inspired Siri Shortcuts, and any Shortcuts you set up in iOS 12 will work like routines in Workflow.

Siri is also getting smarter in iOS 12, providing pre-emptive suggestions and accessing a broader range of knowledge. You can’t hack this stuff into Siri yet, but if you want to test out these abilities ahead of time, then check out Google Assistant instead: It knows just about everything (as long as that information lives somewhere on the internet), and like a real assistant, it can monitor your behavior to suggest actions based on the time of day and your usual habits.

Apple’s mobile operating system already includes an augmented-reality engine called ARKit, which lets developers build AR-enabled apps. Now, iOS 12 will usher in a few improvements, including a handy AR app called Measure. As the name suggests, it lets you use the camera on your iDevice to measure a distance in the real world.

However, the App Store already contains quite a few AR-enabled measuring apps. The most comprehensive and accurate one that we’ve found is AirMeasure, which lets you map out floor plans, draw, and measure everything from a picture frame to a desk. As with any AR app out there, you can’t completely rely on the measurements, so use them as a guide rather than the ultimate in precision. Because of that, AirMeasure does feature a handy triangulation tool to help you verify your results.