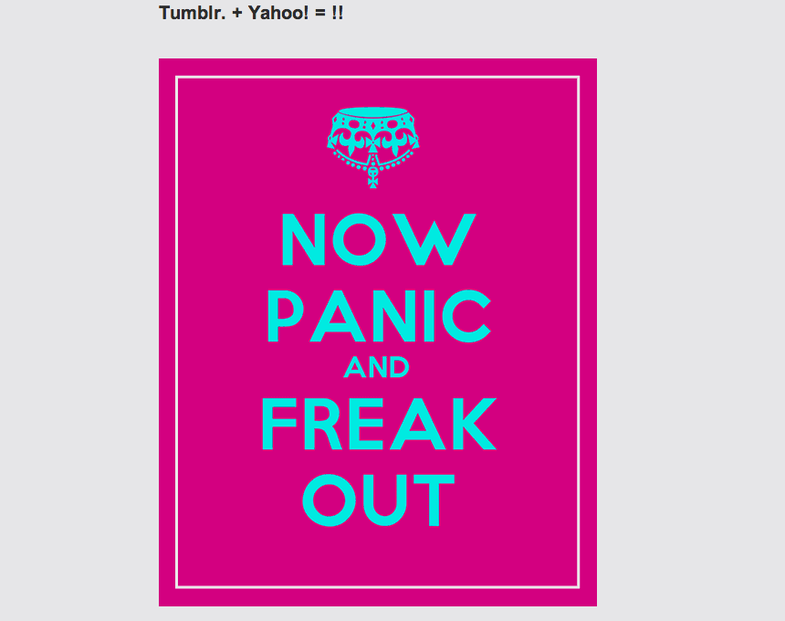 Marissa Mayer, the new-ish CEO of Yahoo, announced this morning (though the purchase had been approved by Yahoo’s board a few days earlier) that Yahoo will purchase Tumblr, the image-centric blogging and social network beloved by, mostly, teens. Her post was illustrated with a GIF, and posted on Tumblr. David Karp, the very young CEO of Tumblr, announced the acquisition on the staff Tumblr, ending with the salutation “Fuck yeah,” because he is very young.

Yahoo has had a bad decade; the service was dominant in the early years of the internet with their “front page,” a list of news and weather and updates that would routinely be set as a user’s homepage. That led to other successes in search and email, but as Google became dominant in both those categories and the “front page” began to fall out of favor, Yahoo became a company with an aging and apathetic userbase. So they began acquiring other companies.

These have all turned out poorly. For an in-depth account, check out Mat Honan’s piece for Gizmodo about the acquisition and destruction of Flickr, but that’s just one of many. Geocities, del.icio.us, and so many more have also been nabbed by Yahoo.

Mayer, though, is a founding member of the early Google team, and was brought on to revitalize the brand. This is her first major acquisition, and man, is it a major one.

Tumblr is a blogging platform, but a closed system, unlike, say, WordPress. Blogs are customizable, but only to a point, and the format encourages images and videos (and, especially, GIFs) rather than long wordy posts. More importantly, it’s a massive social network, with 300 million unique visitors a month, commenting and sharing posts and joining and contributing to lots of little communities within Tumblr.

The concern is that Yahoo will, as they’ve done before, stomp out the personality of Tumblr, inject advertising, alienate the users, and kill the community. (Tumblr, it’s worth noting, has neither made nor seemed interested in ever making a profit.) Mayer seems determined not to follow this route, at least from her post, but Tumblr users are upset anyway. WordPress noted that tens of thousands of Tumblr users had exported their Tumblrs to WordPress after the announcement.