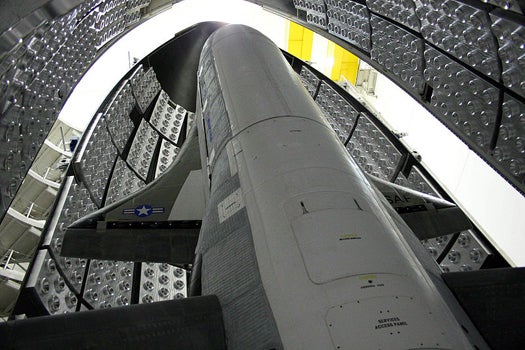 Here at PopSci we don’t like to spread rumors. And that’s how I generally like to start off a post wherein I intend to propagate some kind of hearsay rooted mostly in speculation. Hearsay like this: America’s X-37B spaceplane, the shuttle-like unmanned robotic orbiter that the Air Force put into orbit for the second time back in March, is probably (possibly) spying on China’s Tiangong-1 space station.

At least, that’s what we heard. Specifically, that’s what the Web is hearing today via Spaceflight magazine, which is reporting that the X-37B currently circling the globe is in an orbit that closely mimics that of China’s experimental space station. And given the fact that many in the space community–including the U.S. Air Force, owners of the X-37B–are somewhat wary of China’s space ambitions, who are we to say that Spaceflight mag is wrong?

First, the facts. We know that Tiangong-1–which was launched back in September and is slated to host a manned crew sometime later this year–is in an orbit with an inclination of 42.78 degrees at an altitude of roughly 186 miles. And we know–not from the Pentagon but from a group of vigilant amateur space trackers–that the X-37B is orbiting at about the same altitude and at an inclination of 42.79 degrees. Not only is that orbit strange for a military recon satellite–they usually have polar orbits that offer better access to the entire globe–but it would periodically bring the two orbiters very close together.

Of course, the leap that’s being made–that the reason X-37B and Tiangong are on such similar paths is because the former is spying on the latter–is speculation entirely. The 30-foot X-37B has a cargo bay roughly akin to the interior space of a van, and there’s no telling what kind of sensors or other equipment might be stowed in there. And though China has been somewhat forthcoming about Tiangong-1’s mission, we can’t really be sure about that either. Putting them on the same orbital path is practically a recipe for rampant speculation.

Tiangong-1 is small precursor space station China is developing as a technology testbed for the 66-ton space station it hopes to have underway by 2020 (the People’s Republic recently docked a Shenzou spacecraft with Tiangong-1, showing the world just how far its on-orbit capabilities have come). But given the fact that China draws no real distinction between its civilian, science-oriented space endeavors and its military space ambitions (in fact, it was a military officer who offered the congratulatory speech to Tiangong’s mission handlers after the docking), the rest of the world has reason to be wary of what’s going on aboard Tiangong-1.

So is the Air Force’s X-37B up there shadowing a Chinese space station, keeping an eye out for any shady, militaristic activities? We have no idea. That’s just what we heard.