To Show Us All the Winds of Space, NASA Will Launch Five Rockets at the Same Time

The tracers will light up the sky on the East Coast 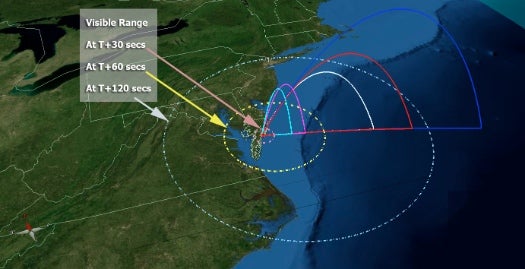 One rocket launch is a good time, but five rocket launches is a party. And at NASA’s Wallops Flight Facility in Virginia, the party is on. This month, NASA will launch five sounding rockets within about five minutes from Wallops on a mission to test the winds in the high-altitude jet stream some 60 miles up.

The high-altitude jet stream is considerably higher than the one driving the weather down here at the surface, but it does drive the weather in the ionosphere. The charged particles and electric currents there can interfere with spacecraft and satellite communications, a problem exacerbated by the turbulence brought on by the jet stream. So NASA has a vested interest–both in terms of atmospheric science and in terms of spaceflight and satellite design–in gaining a better understanding of how this works.

So later this month, five sounding rockets will be launched in rapid-fire succession (for you rocket geeks, those will be two Terrier-Improved Malemutes, two Terrier-Improved Orions, and one Terrier-Oriole–more about those via the link below) carrying a milky white tracer chemical into the high-altitude jet stream where it will be released. That will let scientists — and everyone else — on the ground “see” the winds up there at the edge of space, where they typically gust at 200 to 300 miles per hour.