Pushing the limits of DIY in Shenzhen, China. 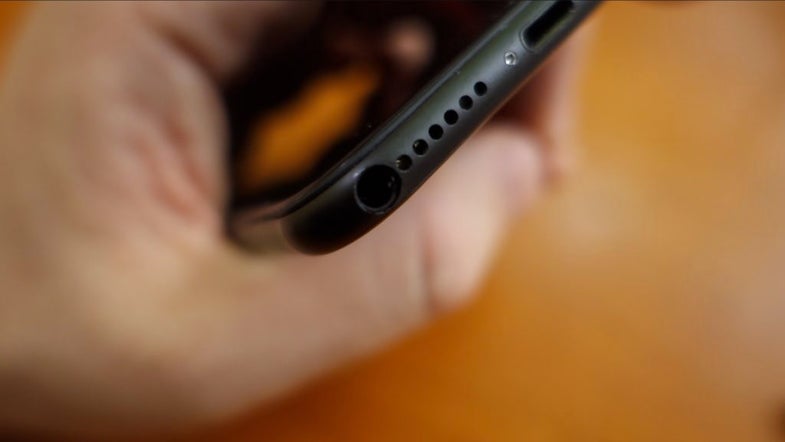 This is what a DIY headphone jack in an iPhone looks like. Scotty Allen / Strange Parts
SHARE

When Apple announces the next iPhones on Tuesday, one thing is a pretty safe bet: It won’t have a headphone jack. The company famously removed it from the iPhone 7 models, saying the old analog jack had to go, in part because space in the devices was “at a premium,” as Apple executive Phil Schiller said at the phone’s launch last year. The move spurred an outsized amount of clamor as the company pushed people towards wireless solutions like their $159 Bluetooth AirPods.

But Scotty Allen, an American with a very strong do-it-yourself streak known for building his own iPhone from spare parts he procured in Shenzhen, China, decided to add a headphone jack back into the device; he’s just published a video thoroughly explaining how he did it. Ultimately, he says the process took him about four months and thousands of dollars—you can watch the full 33-minute step-by-step video below.

The project, he explains over Skype from Shenzhen, was born out of his practical desire to use his wired headphones, but he was also intrigued by the “engineering problem” with installing one back in the device himself. It wasn’t a “philosophical crusade,” he says, so much as an opportunity to tell a good story.

Allen, a 38-year-old former Google engineer who now travels full time, explained the process in detail in a lengthy video peppered with commentary like “that’s bad,” “I’m nervous,” and “I feel like I’m gradually learning how to not break stuff.” It’s a journey that took him way beyond a simple cut-and-solder project to moments like visiting a factory that makes flexible printed circuit boards.

How he did it

To make space for the headphone jack hardware, Allen used a Dremel-like rotary tool to grind out material, like aluminum, within the phone. “I really shaved everything down,” he says. (Dear reader: You probably shouldn’t try this at home if you care at all about your phone, its warranty, or its waterproofness.)

Apple sells small dongles that adapt a traditional headphone jack to the iPhone’s Lightning port. It was these dongles that, in part, allowed Allen to jury-rig the phone. Besides that adapter, the project’s key element is a flexible circuit board that Allen himself designed. That circuit board acts like an internal switch and makes the whole system possible, letting either the ad-hoc headphone jack play music or the Lightning port charge the phone. Alas, while innovative, his solution doesn’t allow the phone to be charged while he’s listening to music through the headphones.

“In general, everything is tiny in there,” he says, regarding the iPhone’s cramped interior; purchasing a microscope was a game-changer during the process. Ultimately, while it’s difficult, he says that modifying a phone as he did is not impossible. After all, Shenzhen—the city he calls home sometimes—is known for its spirit of experimentation.