This Cop Turned A Helicopter Into An Amphibious Racecar 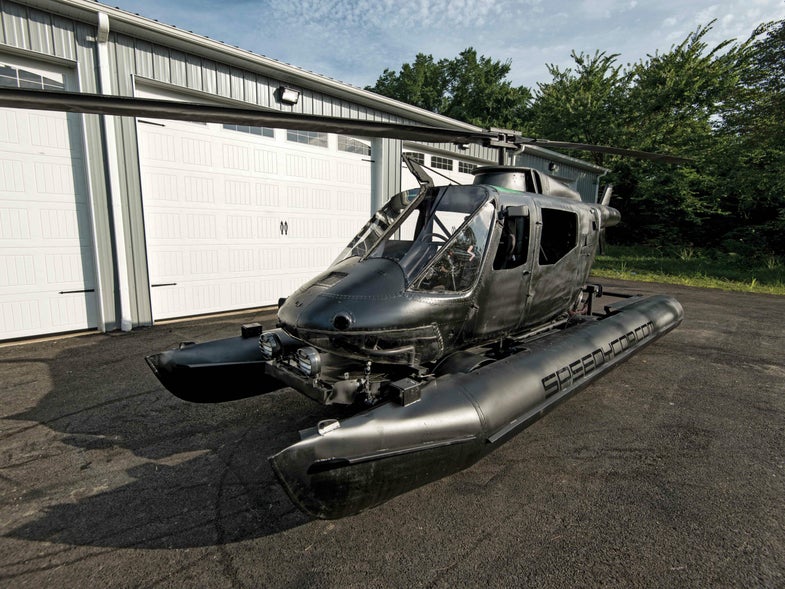 Last year, the dented body of a 1969 Bell OH-58 Kiowa helicopter sold at auction for $3,101. Previously, it had served in the Vietnam War, flown missions for a federal drug task force, and been chopped up for parts in Nashville, Tennessee, before floating away during a flood. Instead of landing in the junkyard, it got a second lease on life—as an amphibious car.

That’s because the helicopter’s new owner was Jeff Bloch, a novelty-car builder and D.C. police officer. Bloch, who had dreamed of making a helicopter racecar for years, received the chopper as a donation and immediately recruited 16 friends and family members to help make it drivable. They mounted the helicopter on the chassis of a mid-’80s Toyota van wagon and added a lightweight rear suspension from a Mazda Miata.

But Bloch wanted his racer to look like a drivable helicopter, not a sloppy mix of mashed-together parts. So he affixed pontoons to the seam between copter and car, hiding the mismatched body. He reasoned that they could act as bumpers when races got heated—and then he realized they could make the vehicle amphibious. “If I’m going to use pontoons to hide the chassis, it might as well float,” Bloch says. Which means the vehicle can now do everything except fly.

In May, Bloch’s “Racecopter” won the Organizer’s Choice award at the 24 Hours of LeMons race in Millville, New Jersey, even though the Audi engine dropped a valve after two laps. In the water, that same engine runs a 7,000 rpm four-blade propeller harvested from a parasail boat. James Bond’s submersible Lotus might look a bit sleeker, but the Racecopter is 100 percent DIY—and has actual combat experience.

From The Junkyard To The Racetrack

This article was originally published in the September/October 2016 issue of Popular Science, under the title “A Custom Chopper-Pontoon-Racecar.”