An iPhone-Controlled LED Suit Tears Up The Dance Floor

The sharpest-dressed man at Dragon*Con 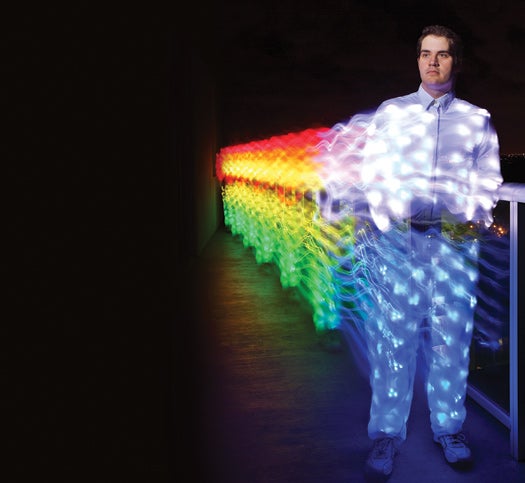 The first time Marc DeVidts attended Dragon*Con, a sci-fi convention sometimes known as Nerdi Gras, he felt distinctly underdressed amid all the aliens and space travelers. He decided to outdo them the next time with a project tailor-made for the event’s late-night, darkened dance floors: an LED-laced, iPhone-controlled, all-white suit that flashes light patterns in time with the music. Travolta, meet Tron. 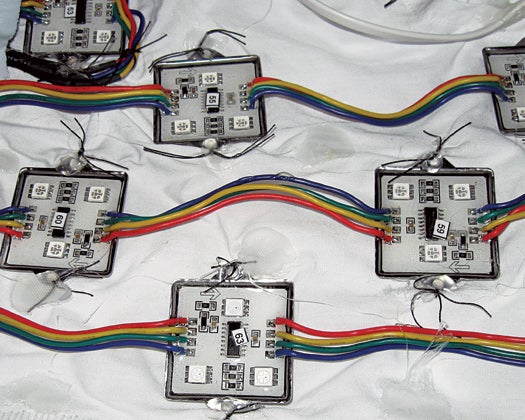 An Inside Look at the LED Suit

DeVidts, a 26-year-old electrical engineer, started with 40 LEDs, but when a quick test showed that they didn’t produce the dazzling effect he wanted, he bought another 160. He sewed all 200 to the outside of a white shirt and matching white pants, and wired each of them to a lithium-polymer battery stashed in his left pants pocket. Then he covered them with a layer of nylon to diffuse the light, and added another white-shirt-and-pants layer.

He purchased the necessary Arduino microcontroller to turn the LEDs’ source code into illuminated action and linked it to a circuit board he designed and fabricated himself. For an iPhone user like DeVidts, the next step was obvious: He needed an app for that. He wrote a series of programs that alter the patterns in which the LEDs flash and added a 2.4-gigahertz antenna to the controller so it could receive commands from the iPhone.

As expected, transforming himself into a walking disco light show made him a hit at Nerdi Gras this past September. The best compliment of the night, he says, was an onlooker who yelled, “You’re a walking seizure!” 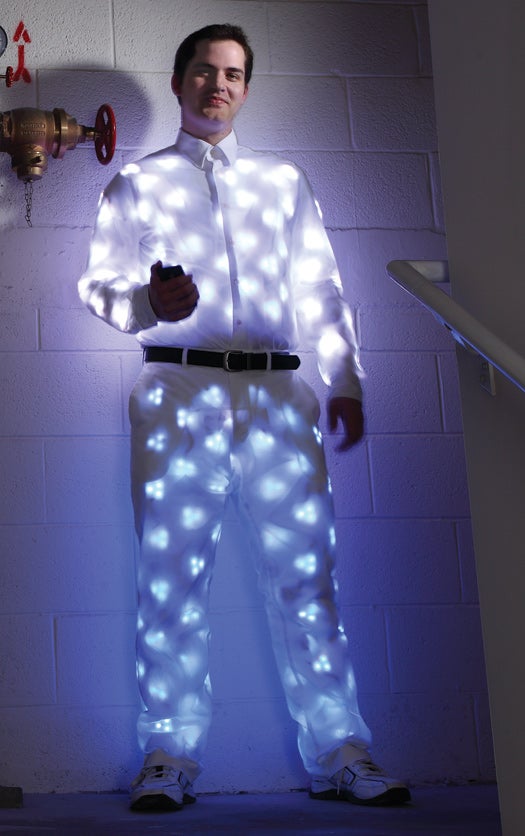 iPhone The iPhone sends a wireless signal to the controller, which communicates with each of the 200 LEDS. Through the iPhone interface, DeVidts can choose from a series of preset programs he wrote that create moving splotches, wide rings or small dots of bright light. He can adjust the direction and speed of the light patterns, alter the colors and more.

DeVidts also added an accelerometer to the wrist of one arm, sewed a small microphone into a glove, added two buttons to the fingers, and hooked it all to the controller. When he raises his arm, the motion sensor signals the controller to extend the selected sequences along his arms (usually the LEDs just flash over his legs and torso). The microphone, meanwhile, is designed to pick up sounds so the controller can pulse all the lights in the suit in sync with the music, but he hasn’t been able to adequately screen out ambient noise yet. For now, he can pulse a chosen sequence to the beat of a song by pressing the buttons in the index and middle fingers of the glove.

In daylight, DeVidts isn’t fond of the all-white look of the suit: “I ended up looking like a milkman.” But he found that white looks best when diffusing the LED light. Inspired by the way photographers diffuse flashbulb light, he further enhanced the effect by buying a sheet of nylon fabric and sewing it over the LEDs in a kind of ruffle pattern. This way the light spreads out immediately, so you just see a blur instead of the individual LEDs, which looks much cooler in the dark. “It looks like your whole set of clothes is lit up,” he says.