Who Are the Fans of Formula E?

For the true believers, E stands for "early" The sixth race of the inaugural all-electric Formula E racing season was held on the streets of Long Beach, California on April 4. This is a town that knows racing—for decades, its downtown has hosted races from Formula 1 to Indy cars. The barriers and tire walls erected for this race would remain in place — or be moved to expand the circuit — for the next two weeks, as the Formula Drift season opener and Indy Lights Grand Prix rolled into town.

But in a city where racing is as much a part of the architecture as the Queen Mary, would residents and visitors be as eager to hear the whine of electric motors as the roar of internal combustion engines? One way to attract the curious was to make this Formula E race, and this race only, not only emissions-free but free-free. There were no tickets to buy to come sit in the stands to watch qualifying, practice, and the race itself. You could pay for access to the paddock or the swanky Emotion Club, but spending a day watching a professional, international race series in the California sun was free.

Since the teams practice, qualify, and race all in one day, beginning at seven in the morning, Formula E set up a family-friendly village around the track with food trucks, electric go-karts, and vendors to keep everybody busy between heats. The stands were pretty empty first thing in the morning, but fans flowed into the seats as the day progressed.

What were those fans expecting? It depended on where they were coming from. Some were expecting very little, like the woman who came down from San Francisco who’d never been to an auto race of any kind before. But others, especially Formula 1 fans, were divided. Some liked that the series was in its infancy and they could watch it develop and grow. Most of the drivers come from Formula 1, and people with paddock passes appreciated being able to get so close to the series’ stars.

There was also frustration with the arcane rules and growing pains. The tech inspectors found themselves sitting in the team garages to make sure no one illegally charged a car during practices and qualifying, even though the power to the paddock had been shut off to prevent just such rule-breaking. The announcers in the lead-up to the race knew there was a minimum amount of time for the drivers to switch cars midrace to make sure they were properly belted in, but they had no idea what that minimum time might be.

Fans were also divided on the subject of sound. Electric race cars whine loudly, like a subway train coming to a stop, with the occasional and surprisingly loud tire chirp thrown in. A London black cab driver admitted that F1 cars sound great, but he was not missing the sound at the FE race. A volunteer tech inspector felt that FE is too slow and too quiet, but he was looking forward to changes in technology (and the rules) that would make for more exciting racing in the next five years. 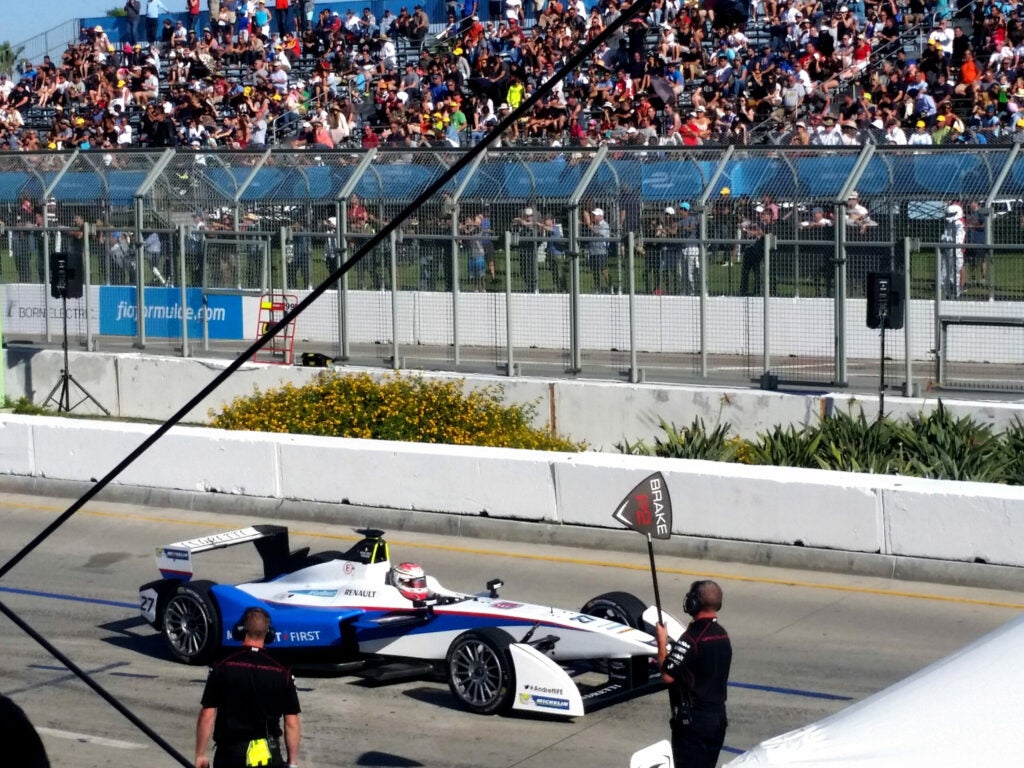 Long Beach’s history with racing helped it cater to the fans’ race-day experience. At the previous race in Miami, drivers had to take the cars off the track and back to the paddock to make the midrace swap — out of sight of the spectators. In Long Beach, the second car was kept at the ready along pit lane in full view of the grandstands on either side of the track.

Formula E wants fans to get involved in a more immediate way via FanBoost online voting. The three drivers who get the most votes via app or website get a 5-second 40-hp boost in each of their teams’ two cars. Jean-Eric Vergne in an Andretti car used his FanBoost to take third place on the restart after a caution early in the race. The strategy netted Vergne second place to Nelson Piquet Jr.’s first Formula E win (in the city where Piquet’s father earned his first Formula 1 win thirty-five years before).

Most fans were aware of the environmental aspects of electric races and had hopes that Formula E could prove that green is still fast and fun. People in the paddock were surprised to see the plumes of carbon dioxide — the biggest, baddest greenhouse gas — coming from the dry ice used to cool down the batteries in the cars between heats. But some people also had concerns about well-to-wheel energy issues; what if the power for the track comes from coal? What about the fuel used to ship the cars and fly the teams to tracks around the world?

Most of the fans in Long Beach were willing to take these growing pains in stride — for now. The technology needs to advance and the rules need to come up to speed to bring in new fans of a new kind of racing.