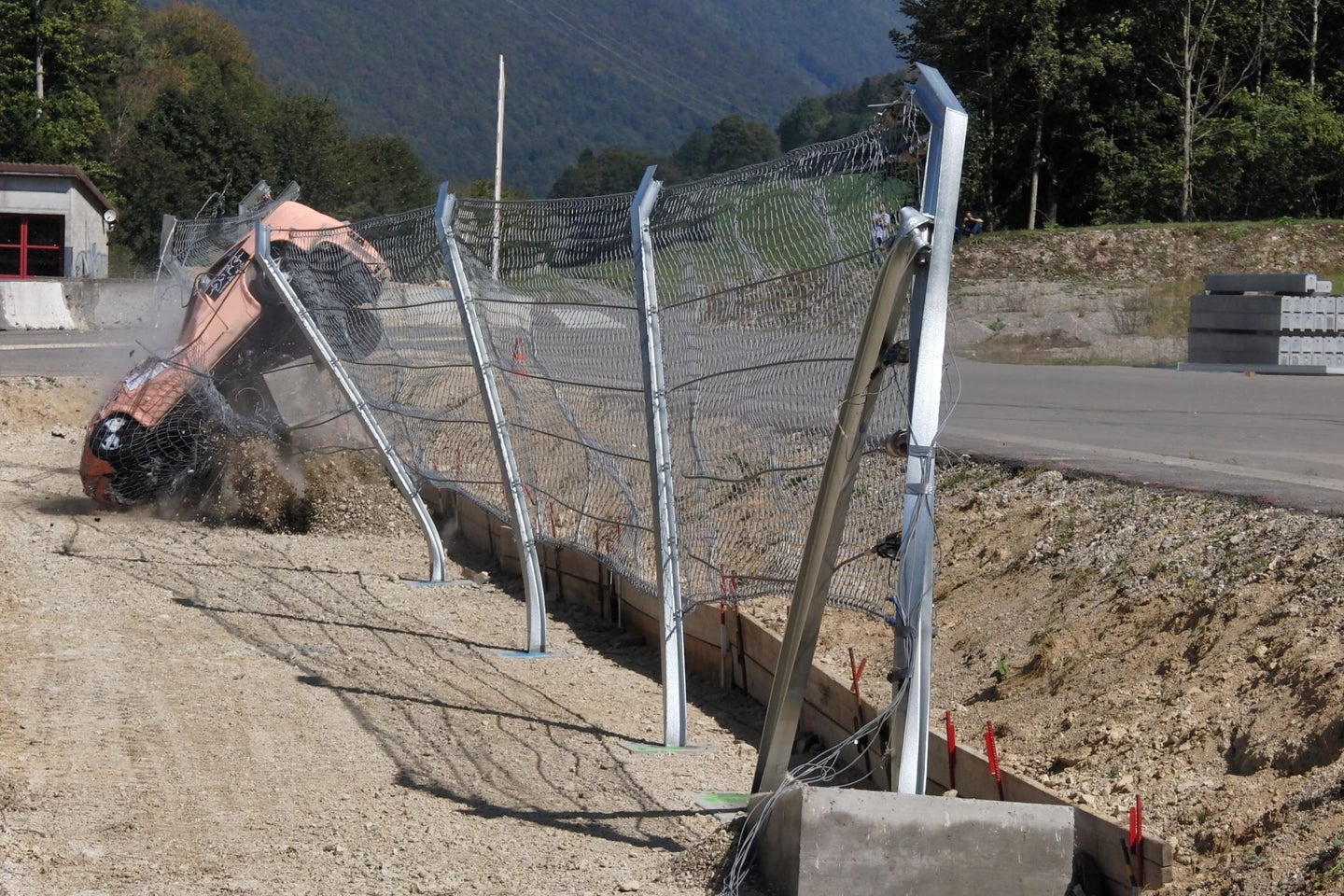 Engineers put their new fence design to the ultimate test by crashing a car into it to see how far it budges and warps. Geobrugg
SHARE

Spectators at car races may not think too much about the design of the fences between them and the speeding vehicles, but these screens serve an important purpose: protecting people from any debris during a crash. Now, Swiss company Geobrugg has designed a new fence. The posts in this new design are spaced apart at every 20 feet, up from the usual 13, providing more visibility of the racetrack without compromising the audience’s safety. To prove the fence’s mettle, Geobrugg’s engineers even hurtled a car and a cannonball into their fence as a test. As a result, the company garnered certification from the International Automobile Federation (FIA) for their design.

“We guarantee full safety according to the FIA guidelines and regulations,” says Peter Utz, the head of the technical department safety solutions at Geobrugg.

The purpose of debris fences is to keep all the detritus from a crash on the side of the racetrack. This includes flying scrap metal, loose tires, and in the very worst cases, the race car itself. Standard debris fences rise 11 feet above the ground, consisting of poles affixed with concrete at the base. In between the posts are expanses of wire mesh propped with cables running horizontally from pole to pole. Now, with fewer posts that are spaced further apart, Geobrugg’s new fence system is lighter and uses 50 percent less steel than the typical 13-feet variety. As such, the new design incurs lower transportation and installation costs, says Utz.

Moreover, the posts are usually the hardest spots in the fence system, so they pose the greatest danger to race car drivers who crash into the fence. Fewer posts translates to a lower risk of injury on the driver’s end, as the design reduces the chances of them running into the most lethal part of the fence in the first place in the event of an accident.

The innovation behind the fence lies in how the mesh connects to the cables. The engineers fashioned the mesh from stronger, high-tensile steel, then attached it to the cables using helix spiral connections.

To put their fence to the test, the engineers ran a race car into their fence taking off from the ground at around 30 degrees at a speed of 93 miles per hour. According to Pieter Martens, project manager of Motorsport at Geobrugg, the company went above and beyond the FIA requirements to perform this test at 75 miles per hour. “We were that confident,” he says.

Also, to simulate a head-on collision, the engineers employed a 1720-pound steel ball and catapulted it at 40 miles per hour into the fence.

The fence successfully contained any car rubble, and in both tests, never budged or protruded more than 10 feet from the original affixed location. Utz doesn’t recommend that a spectator risk it and sidle up to the fence within this distance though—there may be other ways a car can wreck, such as, in an extreme case of bad luck, flipping over the fence and clearing it altogether.

Geobrugg’s advanced debris fence system has already been employed in several race tracks. The recent standardized tests are the final hurdle for the fence’s installation in races of the highest tier: Formula One. The company says that although there are no concrete plans as to which specific racetracks at this tier to install them at, the plan is to use these fences whenever any F1 facility is due for an upgrade. This makes the product now cleared for launch in all motorsport races of any kind around the world. Outside of F1 racing, the company is already receiving interest from other racetrack customers in Japan and India.

Watch a video of the tests, below: