Poise and Luxury on the Track 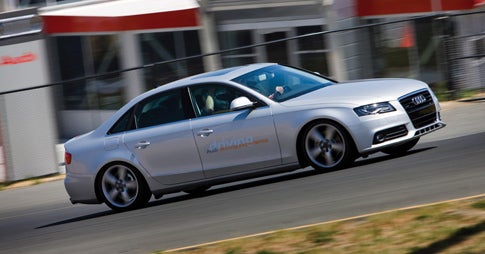 The business of cars, like that of pop music, is a what-have-you-done-for-me-lately proposition. Take Audi, which has moved scores of A4s since the mid-1990s. Like any other automotive hitmaker, every so often it must turn out a fresh one that reads like a John Grisham novel, a force multiplier that reacts to trends and keeps things moving forward. This can get tricky, as Ford found out when it tried to update the popular Taurus in 1996 and wound up, as Britney Spears did with Britney (the one where she tried to write her own songs), on the losing end of a pivotal moment.

The A4, a small but growing luxury sedan, isn’t quite in the same league as the Taurus, which at its peak had a larger following than Thin Mints. It is, however, Audi’s number-one model range. The Volkswagen-owned luxury brand aims to clock 1.5 million sales per year worldwide by 2015, and without a highly desirable A4 it has as much a chance of hitting that mark as John McCain does solving the scramble in American Cheerleader. No pressure there.

Hence, Audi took a cold look at its current A4 model, put on a few hundred pots of black coffee and went to work. And here we are, thousands of design meetings and engineering brainstorms later, on a racetrack in Northern California. It’s Infineon Raceway in Sonoma, where the company keeps a high-performance driving school. Sure, the likelihood of an average A4 buyer lapping a racing circuit pretty slim, but Audi uses the school to validate the high-performance profile buyers either expect or merely assume from their German luxury sedans. But to be fair, performance is only part of the entry-luxury game. And with the 2009 A4, Audi is attempting a dual-pronged offensive. It’s acknowledging both the cushier, more conservative Lexus ES350 and the BMW 3-Series juggernaut. 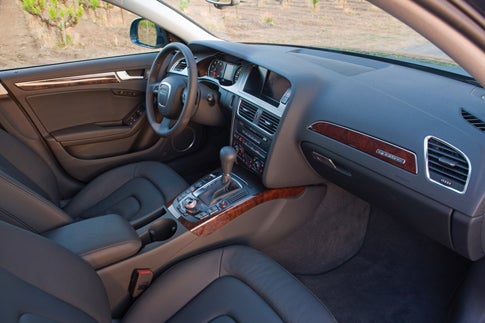 The new A4 is far larger and roomier than before, with measurements within striking distance of the company’s midsize A6. The outgoing A4’s cramped rear seating area has given way to quarters spacious enough even for the lengthiest gams. At 185.2 inches long, the A4 is seven inches longer than the 3-Series, with a wheelbase nearly two inches longer. An even more noteworthy difference is in the rearward golf-club storage receptacle (i.e., trunk). The A4’s cavernous, 17 cubic feet of space exceeds that of the BMW 328i sedan, which can handle 12 cubic feet’s worth of MacGregor product. By comparison, the Lexus ES 350’s trunk displaces 14.7 cubic feet.

Audi is also betting on technology to give the A4 flexibility in the marketplace. Chiefly, that’s by way of an option dubbed Audi Drive Select. That’s the umbrella term for a set of functions that tune the A4’s Continuous Damping Control (CDC) suspension, dynamic steering and engine and transmission responses. CDC can lower ride height and modulate the amount of damping in each shock from stiff to boaty. Dynamic steering adapts the steering ratio and resistance depending on need or desire. At slow speeds or winding roadways, the steering stays sharp and crisp, but on the freeway, the ratio flips and inputs generate progressively less-intense turning reactions. The system also alters engine and transmission responses from languid to punchy. Drive Select settings include Comfort, Auto or Dynamic, but we found a nice, predictable track-friendly mix by combining dynamic engine, transmission and steering settings with the comfort suspension setting. It’s all controlled with Audi’s answer to BMW’s much-maligned iDrive system, called the Multimedia Interface (MMI). Sure, it all adds up to what software engineers like to call “feature creep,” but in the luxury market the mantra is (or should be) gadgetry is king. 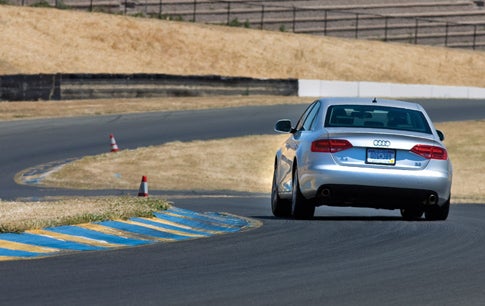 A freshly tweaked Quattro drivetrain and new suspension tuning options keep the ’09 A4 swift in the corners.

It’s no surprise Audi’s called us out here at Infineon; it is on high-grade tarmac that the 2009 A4 best displays its poise. The new model shares a fresh skeleton with Audi’s latest two-door A5 and S5. This Modular Longitudinal Chassis (MLB, in German) enabled a major change in the A4’s drivetrain positioning. Compared with the outgoing model, the new A4’s engine has been nudged rearward, shifting its weight behind the front axle. This simple adjustment has had a dramatic effect of equalizing load distribution. The results are both visual and tactile. The A4’s characteristic front overhang has been lessened, which mitigates the ’08 car’s bucktoothed profile. More important to drivers is the degree to which the change erases much of the plowing, or understeer, that plagued previous A4s when pushed hard in a corner. This change is most evident on the tarmac of Infineon Raceway, where we detect so little of the previous A4’s signature nose-heaviness that the car feels at times nearly indistinguishable from the BMW 3-Series it has in its sights. And by using a new, thinner grade of high-strength steel, Audi says it’s cut the A4’s body-shell weight by 10 percent, while making it 5% more rigid.

The second major change regards the company’s Quattro all-wheel-drive system, which is now 40/60 rear-biased (no longer 50/50), and comes with a self-locking center differential. It’s a simpler system than other companies’ new vectoring clockworks that distribute torque actively to all four corners, like BMW’s Dynamic Performance Control or Acura’s SH-AWD. But its machinations are seamless and often mitigate the need for the intrusion of electronic traction control. The latest version of Audi’s aging Tiptronic automatic transmission has six (count ’em) gears and can be set to react as quickly and cleanly as many dual-clutch manu-matics or lazily enough to keep grandma’s pies from spilling over in the trunk. It’s not a liability. Don’t expect a six-speed manual in the US, though–not enough demand. 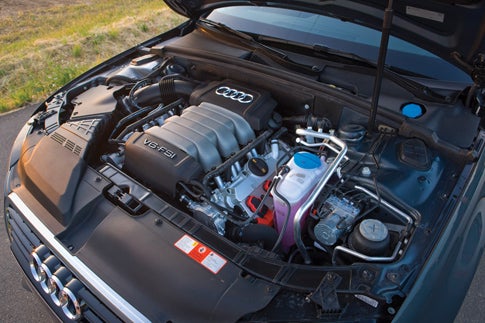 Moving the engine rearward in comparison to the outgoing model optimizes weight distribution and slims design lines in front.

Another cool bit of mechanical kit on the ’09 A4 is the Audi Valve-lift System, or AVS. It’s a bonk-yourself-on-the-head simple mechanism that shifts the intake cam laterally by seven millimeters, engaging a higher-profile lobe and changing valve lift from 5.7 mm to 11 mm. AVS kicks in without fanfare between 700 and 4000 rpms, sharpening engine response up noticeably.

It’s clear Audi has some line changes up its sleeve. A larger, more flexible and luxurious A4 leaves more room for its entry-level A3 to stretch its legs, but it also crowds the upmarket A6, which is due for a freshening by early next decade. But whatever the company has percolating in its back room, it’s placed a $1 billion development-budget bet that lumbar-spine-conscious entry-Lexus buyers will find fewer reasons, other than stronger pain relievers, not to choose German, and BMW buyers will have more performance-oriented reasons to question their loyalty. Fans are fickle, but there are worse ways to keep them on the hook–and find some new ones—than by adding value.