A big change is coming to F1 cars—and their tires

Larger tires should allow drivers to push their vehicles even harder. This is how Pirelli developed them. 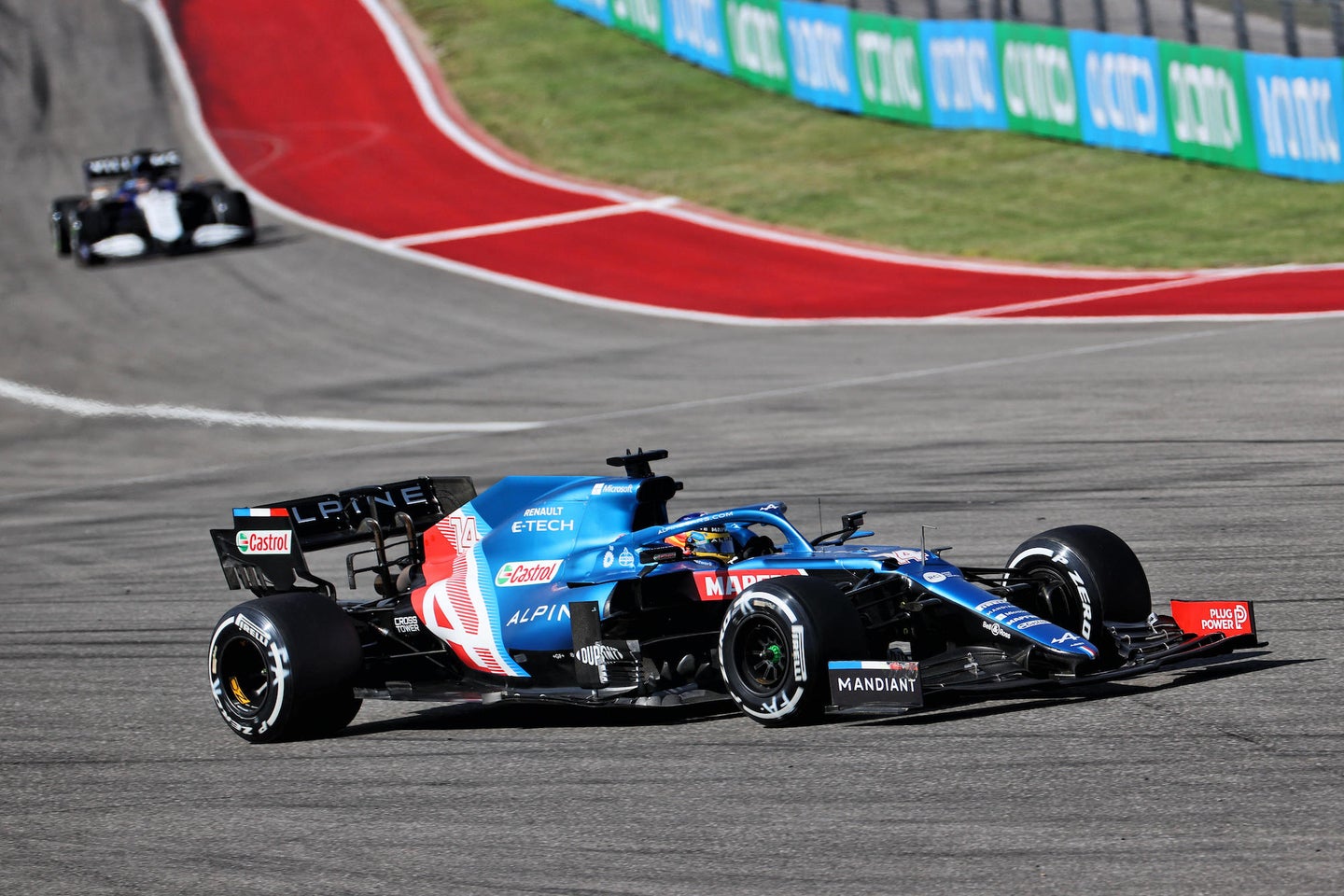 The wheels and tires are getting bigger. Alpine Racing
SHARE

Just as a flood of new fans has discovered interest in Formula 1 as a result of lockdown binges of Netflix’s Drive to Survive series, the sport is shuffling the deck for 2022. Changes in the rules for the winged wonder cars include plans for teams to share some common components to save money and revised aerodynamics that should foster closer racing.

Another of the changes is the tires. After a half-century of using 13-inch wheels with balloon tires, F1 is going to 18-inch wheels with low-profile tires. These large wheels and slender-sidewall tires look and work more like the tires that Pirelli makes for high-performance sports cars.

As the contracted sole supplier of tires to Formula 1 through 2024, Pirelli wants to be able to transfer know-how between its racing and production tires, and it wouldn’t mind if customers could look at the racing tires and see in them a glimpse of the rubber they could buy for their own cars.

That’s different from the outgoing tires, whose roots stretch to the 1960s, when Goodyear, Firestone, and Dunlop were the tire suppliers. For 2022, Pirelli’s F1 tires will be more contemporary and relevant.

Today’s 13-inch tires are plenty fast, as their tall sidewalls let them squish and morph over the track surface for excellent grip. But all that motion takes its toll as the rubber heats and wears, producing the dreaded “degradation.” That the word F1 teams use to describe the loss of grip as tires wear. Watch a race, and you’ll hear it used frequently in the radio communications between drivers and crew.

To avoid losing too much traction—and suffering excessive degradation—drivers pilot their cars cautiously, seeking to manage the tire wear so that each set will last long enough until the planned pit stop for replacement. Failure to do this means losing time to rivals through slower lap times or time lost in an additional stop for another set of tires.

A key aim for the larger 2022 18-inch tires is for the tires to maintain their grip for longer, so drivers can race hard (“push,” in racing jargon) rather than managing their tire wear, says Mario Isola, head of Pirelli’s Formula 1 racing program. Creating these new tires is much more complicated than simply enlarging the tire’s inner diameter to fit on a 5-inch-larger wheel.

The company could have taken the approach to adapt the old tires to a different size, but that would have been a poor solution, Isola says. “At the beginning we had two choices,” he notes. “One was to take the current compounds and try to upgrade them with the characteristics required for an 18-inch tire. The second one was to start a completely new development, different ingredients and new technology and try to make a real big step compared to this year.”

“We decided for this second direction,” he explains. “It is more risky but at the end it is a better decision because [the] result of the test is positive and the feedback coming from the drivers is very positive.”

Taking this approach means every part of the tire is designed to suit the new rubber compounds. “We had to optimize the profile, to optimize the construction in order to have the footprint that is working properly, distributing pressure and temperature as we want. That was the technical challenge.”

The question, then, was how to verify results. In the old days, tire makers would follow an iterative process of creating a tire, putting a set on a car, sending a driver out on track to try it, and then debriefing the driver on the tire’s performance. Then engineers would head back to the lab to make changes and repeat the testing process.

That is a slow and expensive way to develop tires. Worse, because these tires will run on the new-spec 2022 cars, which do not yet exist, there is literally no way to physically test them on the cars that will run them next year.

Instead, Pirelli and the racing teams rely on models of virtual cars wearing virtual tires and driving on virtual tracks. “This is something similar to what we did in 2016 when Formula 1 decided to change the width of the tire,” Isola notes. “We work in parallel with the teams with the simulation and the tire models. Thanks to simulation, we had an idea what to expect the following year.”

The modeling software Pirelli uses is its own custom development, though the company’s original starting point was off-the-shelf commercial software, according to Isola. This is how it created that model for the 2016 tires and the engineers followed that same approach for the 2022 tires.

“The same process was quite useful for us to predict the performance for the following year and it is exactly the same that we did this year, together with the teams,” Isola explains. “The teams have a 2022 car model. We have a ‘black box’ with a virtual tire model that we supply to the teams.”

This is where the familiar iterative process of engineering comes into play, but because the tests are virtual, it is done more quickly and less expensively than real-life physical testing. “They can fit the virtual tires on the virtual car and they can use it in their simulator and come back to us with proper feedback,” he says. “Doing this loop for two or three times, we converge to a better idea of what to expect from next year.”

In the end, Pirelli conducted 5,000 hours of computer simulation testing more than 70 different virtual tire prototypes. This is how Pirelli created the first tires for physical testing that included 10,000 hours of indoor testing on tire dynamometers in addition to the eventual 36 days of track testing of 30 different versions of the tires over 12,000 miles and using 392 sets of prototype tires.

There are still no 2022-spec cars available for testing, so the teams modified current cars to simulate the likely characteristics of those cars as closely as possible. The verdict? It looks as though the effort to make the tires more durable has worked. “The target is exactly this: to give the drivers the possibility to push for all of the run,” says Isola. “We asked them to push for all the laps and that was very useful to understand if they were happy with the new approach. We want to see action on the track and close racing by cars that are following each other, and drivers trying to overtake, but not to make it too easy because otherwise it is not what spectators want.”

Another aspect of having larger-diameter wheels is that the distance between the brake rotors and the inner wheel hub is increased. At the same time, the new rules control brake cooling system design, and the wheels wear covers to control cooling airflow.

This is because with the 13-inch wheels, teams are using heat from the brakes to warm the tires and raise their internal air pressure. With the new larger wheels and tires, brakes will no longer be a tool for tuning tire performance in 2022. “It is designed to flow the hot air, so basically, they cannot use the brakes to define the pressure in the tire,” Isola points out.

This subtle aspect of Formula 1 performance tuning came to fans’ attention this season when reigning champion Lewis Hamilton crashed during the Azerbaijan Grand Prix after accidentally pressing the steering wheel-mounted button activating his car’s “Brake Magic” system. This is a device that shifts most of the car’s braking to the rear brakes, creating heat that warms the rear tires and increases their pressure. The problem for Hamilton was that its accidental activation caused him to lock his car’s rear brakes and miss a turn in what initially looked like an uncharacteristic mistake for the veteran racer.

Now we know that it was just a misfire of the team’s system for controlling the performance of the current generation of 13-inch tires. The sun is setting on that generation, and with that, the possibility of such mistakes next season. Perhaps that only leaves teams the opportunity to make different mistakes managing the new 18-inch tires, but as ever, it will be fascinating to see how engineers and racers adapt to the new rubber and what techniques they will employ to maximize its performance. That should be perfect fodder for future seasons of Drive to Survive.