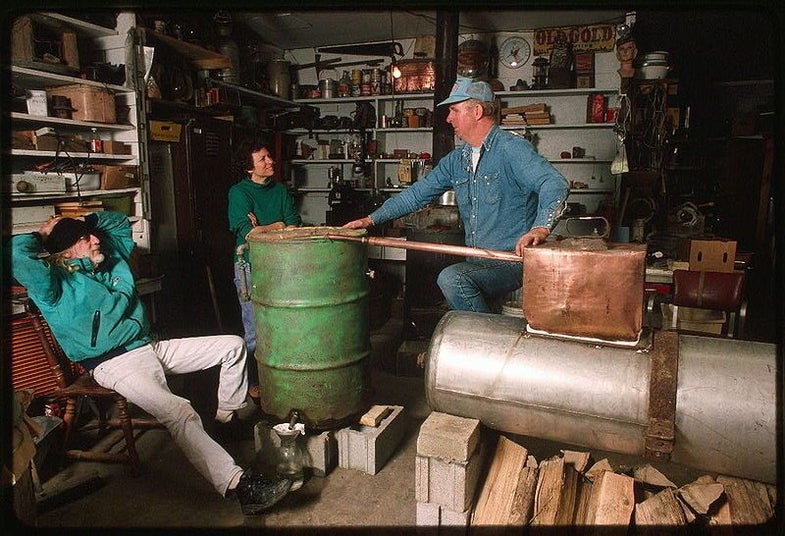 The idea that moonshine or other home-distilled liquors can cause blindness is rooted in truth, but it’s important to separate the causes of said blindness from the alcohol distillation process itself. When homemade spirits cause damage to the optic nerve the culprit is almost always methanol, cousin to the ethanol you consume when you toss back any glass of tipple.

Methanol is a byproduct of alcohol distillation, but only forms in tiny, non-toxic amounts during regular distillation, and anyhow it is easy to separate and discard from the first few ounces of alcohol that drip from the condenser. These first few ounces contain other so-called “foreshots”–low-boiling-point compounds that come out of the still first. Methanol is among these compounds (others are acetone, aldehydes, and other undesirables) that impart unappetizing flavors to perfectly good moonshine. Any distiller worth his salt will discard these at the start, eliminating methanol (which also leads to nasty hangovers in small doses, by the way) from the equation.

So where does the methanol that causes blindness come from? It’s not the alcohol itself you need to be worried about so much as the distiller. Methanol–also known as wood alcohol–is cheap, and its physiological effects on the body are the same as ethanol’s, at least at first. Unscrupulous moonshiners will actually add methanol to their product to up the potency. And when they do so, the results can range from slightly unhealthy to absolutely deadly.

Methanol helps impart a good drunk to the consumer, but just a few hours later as the body metabolizes everything things can turn physiologically very bad. Optic nerve damage could end up being the least of your worries.

“It’s very, very toxic, so even a small amount–just 10 milliliters of pure methanol–can cause blindness,” says Dr. Bruce Goldberger, professor and director of toxicology at the University of Florida College of Medicine. “But just a few ounces of methanol can kill. So one effect is someone becomes permanently blind due to the effect of methanol on the optic nerve. But the second is that it’s just lethal, physiologically, to the body.”

Such was the case in India’s West Bengal state, where 168 people died from drinking a methanol-tainted batch of moonshine just last year. But methanol isn’t the only danger inherent in spirits of unknown provenance. The copper coils generally used as condensers in the distillation process aren’t exactly optimal for making large batches of moonshine for distribution. For large volume illicit stills, nothing works quite like a truck radiator immersed in the product. Of course, alcohol is a solvent and will leach all kinds of things from a radiator, including lead salts that can lead to lead poisoning. Glycol products from antifreeze have shown up in batches of moonshine as well.

That’s another way of saying that while the distillation process is inherently safe (and easy enough to make even safer through the discarding of any trace methanol that may have formed early in the process) there are various external factors that can make the finished product decidedly dangerous to consume. PopSci isn’t endorsing the purchase or consumption of unregulated (and possibly illegal) spirits, but if you simply must dabble in homemade hooch you’d better be sure you trust your distiller (or, alternatively, study up and make the stuff yourself). As with so many other things, when it comes to DIY-distilled spirits, it’s buyer beware.