Antibiotic-Resistant Bacteria Moves From The Farm To The Hospital 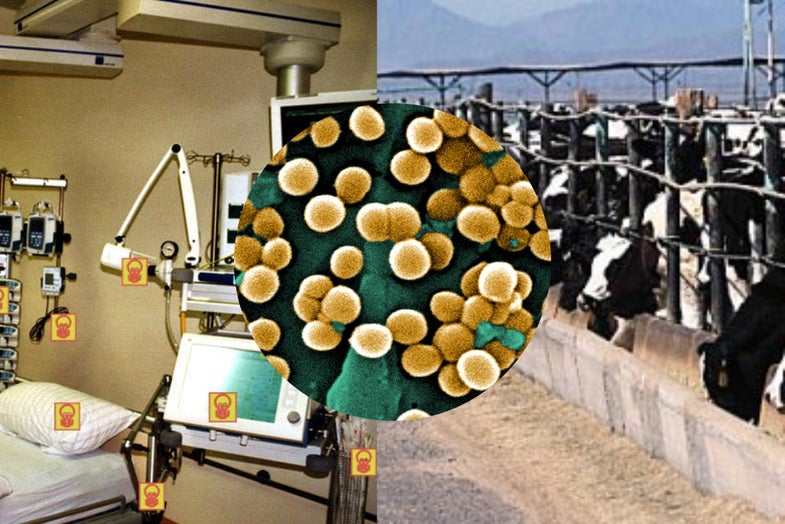 The call for action to limit antibiotic resistance has never been greater. The World Health Organization has already sounded the alarm and even offered the suggestion for legal measures to ensure all countries do their best to save antibiotics for the future. Even government auditors are calling out their administrations for failing to meet the needs. There is a concerted effort to bring resistance to the forefront and ensure something is done.

Action is, however, much more difficult primarily because antibiotic resistance covers two major and completely separate industries, healthcare and agriculture. Both have been known to extensively use antibiotics and in most cases without good reason. But tackling these sources has been troublesome primarily because no one thought they would interfere with the other. The issues in agriculture would have little to no effect on people going to the doctor for a prescription. That view has changed somewhat and many agricultural antibiotics that share similar structures and function with those used in medicine are banned or are scheduled to be in the coming years.

There is also a confounding issue neither side has chosen to address. Most human infections have at one time or another come from animals. These zoonotic organisms spread in the animal population and then end up in humans usually through agriculture. The potential for an animal-based antibiotic resistant organism to show up in hospitals is quite high and has already been realized.

A prime example of the convergence between animal-based bacteria and human colonization occurred in 2009. A strain of Staphylococcus aureus from animals was identified in an area of Manhattan. The source of the bacterium appeared to come from farms some 1,500 miles away in the Dominican Republic. Thankfully, this strain was not significantly resistant.

Last year, when a team from the UK revealed a particular animal strain of Methicillin Resistant Staphylococcus aureus (MRSA) was found in newborns in a hospital. The lines between healthcare and agriculture were blurred and left the authors along with others very concerned about animal transmission of resistant bacteria. The problem was no one could trace the source. No one could tell exactly how the bacterial strain arrived in the facilities.

Earlier this month, a team of researchers from the Netherlands offered a possible answer. They wanted to determine the prevalence – if any – of animal-associated antibiotic resistant MRSA in hospitals. They chose two hospitals in the southern part of the country where farming is widely practiced. What they found not only confirmed their fears, but also suggested that the line between agriculture and healthcare may not even exist.

Their process was relatively simple. They looked at information records focused on positive diagnoses of MRSA. They then looked for a particular strain known to be associated with livestock. They looked at over 10,000 screening records and whittled the number down based on the diagnosis, the identification of the bacterium, and the strain. They came up with a more manageable number, 373, and then started to look for signs of animal association. The hope was animal-based strains would be in the minority, but they were wrong. Of those 373 cases, 292 of them – 78 percent – were associated with livestock.

The next step was to determine if any of these people spread the bacterium to others. The team looked at 42 patients with an animal association and examined their movements and contacts in the healthcare environment. This number ballooned to 416, nearly ten times the number. Thankfully in this case, no other person had been colonized. But this wasn’t entirely comforting as only 39 out of the 373 were actually suffering from an MRSA infection. The rest were simply carriers. This meant only about 10 percent of the potential spread was caught as a result of clinical symptoms. The rest were completely unknown to the hospital staff. This was troublesome. Although primary screening of patients would catch colonizers, other people such as visitors could enter the facility and spread the bacterium without notice.

The authors noted this study highlights the importance of the risk of animal-associated, antibiotic-resistant bacteria to the healthcare facility. They also raised concern over the need for better screening and infection prevention and control practices. Although in this case there were no incidents of secondary colonization or infection, the risk is clearly present. They also pointed out the best way to prevent this would be to follow a system such as the Dutch “Search and Destroy” policy. In this case, suspected MRSA patients are screened early on to prevent any chance for spread. But they also suggested this may need more action to seek out the animal-based strains and ensure they do not spread.

For anyone who might believe antibiotic resistance is a different area of concern based on industry, this study all but eliminates any justification. Regardless of where antibiotics may be used, resistance should be expected. For this reason, whether on the farm or in the hospital, antibiotics should be considered a last resort and only given when an infection has been verified and if possible the bacterium identified.