Evolutionary Conservation of An Antimicrobial Net 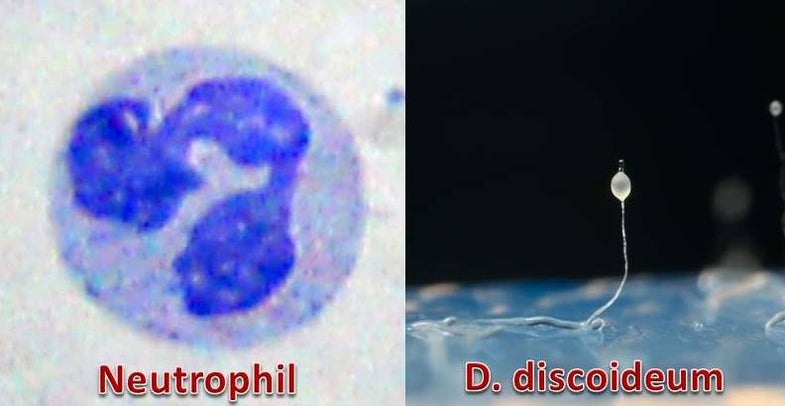 The human immune system is a complex defense force made up of a number of different types of cells such as T-cells, B-cells, macrophages, and monocytes. One particular cell known as a neutrophil is responsible for ensuring potential bacterial pathogens are killed before they have a chance to invade. They are in essence, the first line of defense against an infection.

Neutrophils have numerous mechanisms to deal with pathogens but perhaps the most interesting is the extracellular trap. It’s a fiber made from DNA and extends from the cell into the surrounding environment to trap the bacteria. What makes these entities so effective at killing is the presence of a number of antimicrobial chemicals intertwined within the matrix. Once a bacterium is caught up in this net, it soon meets its fate.

The extracellular trap is without a doubt a fascinating mechanism to control threatening microbial populations. But it’s not unique to humans. Last week, an international team of researchers revealed the extracellular trap may be an evolutionarily conserved mechanism dating back to the origins of higher life forms.

The group focused on amoebae, specifically Dictyostelium discoideum. The species represents an evolutionary crossroad of terrestrial life as it has both the ability to live individually as well as in a three-dimensional society made up of cells and spores. The organism also is believed to be a direct ancestor of human cells as it has the ability to perform a variety of human cellular functions such as phagocytosis, chemotaxis and nuclear-based response to signaling.

D. discoideum has an intriguing life cycle in which it forms a variety of structures, each more complex than the first. In times of starvation, the individual cells aggregate to form a mound. Over time, this mound develops into a larger, moving complex, known as a slug. The slug moves the community to areas of improved nutrition or, if necessary, a place to develop spores. In the latter case, the cells group together to form a stalk and finally a fruiting body, which spread spores around the area in the hopes a plentiful bounty of nutrients, may be found.

In terms of environmental survival, the most critical stage of life happens to be the slug. As it moves, it comes into contact with a variety of external factors, some of which may threaten its survival. To ensure the community’s safety, some of the cells are shed send sent out as sentinels in the hopes of removing any threats from the path. Much like neutrophils, these Sentinel cells have the ability to find bacterial pathogens and kill them long before the slug approaches.

The researchers in this latest study wanted to focus on how these Sentinel cells react to pathogens and to analyze the killing behaviour. To do this, the group first cultured the amoebae with bacteria to allow them the opportunity to grow. Eventually, as the food disappeared, the amoebae began to form the slug. Once formed, it was collected and then shaken to separate the cells. The Sentinel cells were then harvested for the real experimental tests.

At this point, the researchers mixed the sentinel cells with pathogenic bacteria and observed what happened at the molecular level. They expected to see a variety of reactions, which they did, but that wasn’t their goal. They wanted to see if these cells would cast a net just like neutrophils. It turned out they did and they were effective as the levels of bacteria dropped nearly by half in some cases. Upon examination of the traps, the group was not entirely surprised to find the molecules were similar in terms of composition to the DNA and antimicrobial molecules found in neutrophils. There were differences, of course, but they were minor in comparison to the overall similarities between human and amoebae.

For the authors, the results represent a fascinating revelation of evolutionary importance. They have shown the process of casting extracellular nets is a conserved process. Moreover, the information offers a hint as to why our own immune system exists. Much like the slug, we are continually vulnerable to environmental attack. Our sentinels – neutrophils – provide us with the same protection over the course of our lifetime.

The information may also help us to develop a better understanding of the immune system in general. Neutrophils and their traps are not only associated with infection defense but also have been implicated in autoimmune disorders such as thrombosis and lupus. By using the ameobae as models, we may be able to better uncover unknown mechanisms involving these traps to enable the development of better therapies and treatments.