Designer plants could help you do your laundry

The tobacco plant could make cheap detergent instead of cigarettes. 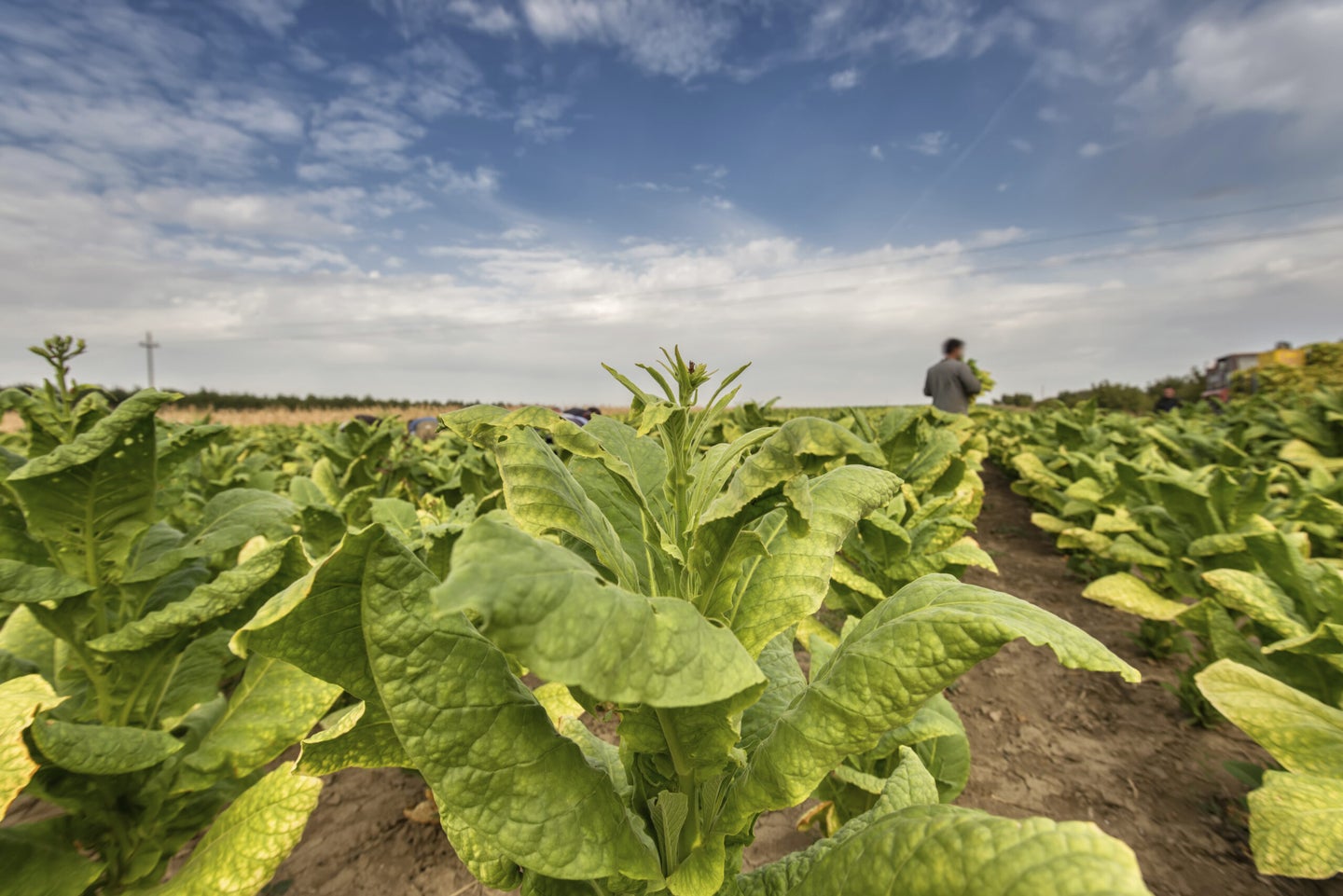 Tobacco is the deadliest plant in the world, responsible for the demise of more than seven million people a year, according to the CDC. But in a new study out this week, researchers from Cornell University and the University of Illinois are giving the plant species a new direction with genetic engineering. Instead of bringing carcinogens, tobacco plants could produce ingredients for laundry detergent, and far more cheaply than manufacturers can now.

Science is often a frustrating process, full of tedium and setbacks. But sometimes an experiment goes better than anticipated. Case in point: In their new study (out last week in the journal Nature Plants), researchers had such great results that they used the word “remarkable” to describe them. In their attempt to give tobacco a new job, the engineers inserted a bacterial gene that makes the enzyme Cel6A in chloroplasts into the plant.

Like many plant enzymes, Cel6A and other cellulases (so called because they break down cellulose, the outer wall of plant cells) are proficient at dissembling larger compounds. Cel6A is incredibly useful to have in laundry detergents, where they get to work disintegrating our stains. The idea would be to re-engineer the designer tobacco plants to produce large amounts of the enzyme, isolate it, and use the stuff to make laundry detergent.

From previous work, the researchers already knew that the tobacco plant was capable of producing these enzymes efficiently indoors. Now, they wanted to figure out how they did outside. So in their new study they tested how well the genetically modified tobacco would fare outside in the field, far from the lab (and where it would be grown if this idea came to fruition) and exposed to variables that normal plants have to deal with, like rain, heat, insect attacks, and infections. They found that the great outdoors agreed surprisingly well with the designer plants, and the greens produced more Cel6A than the researchers predicted. Though they still produced slightly less protein than they did in the greenhouses and growth chambers.

Elaine Tobin, a retired professor who studied molecular plant biology at UCLA, says that the experiment presents a cost-effective way of making Cel6A. “They had a great idea that they brought to fruition.”

One of the authors, Beth Ahner, a professor of biological and environmental engineering at Cornell, got the idea to measure how making the extra transgenic proteins affected the tobacco’s normal growth from a group of French scientists in 2009. The French tobacco plants had less Rubisco, a crucial enzyme that helps plants capture carbon dioxide during photosynthesis. “That early work peaked our curiosity about what might happen in the plants when they have this burden,” she says. She started working with a graduate student to see if they could produce a protein that was useful in biofuel production. When Ph.D. candidate Jennifer Schmidt came along and was curious about the research, they decided to work on Cel6A.

Ahner says they got the genes for this study from Thermobifida fusca, a common compost bacteria. Currently, laundry manufacturers produce the enzymes that go into laundry detergent via microbial bioreactors: big, spinning vats of bacteria that produce Cel6A. Scientists must use some type of life form—whether it’s bacteria, plants, or animals—to produce a genetically modified organism, and there’s some disadvantages to every method. The first organism that researchers ever used were bacteria, which made human insulin that was first officially sold in 1982. But bacteria requires a sterile environment, which means that scientists have to use expensive cleaning equipment and time-consuming precaution procedures. Animals are another option—but they have nervous systems, which cause a whole host of moral and logistical problems.

Plants, though, have little risk of passing on human diseases, and humans have more than ten thousand years of botanical experience. There’s also plenty of space devoted to tobacco production in the United States. The team also set up many safeguards to ensure that the genetically modified plants did not mix with the rest of the population. They removed the plants before they reproduced. Even so, most chloroplasts (where the genes for enzyme production reside in the genetically modified plants) are passed down the maternal line, so pollen (read plant sperm) shouldn’t pass on the changes even if they were to reproduce.

Now that the researchers know they can efficiently create Cel6A, their next goal, Schmidt says, is to standardize it. To do that, she wants to understand the process on a molecular level. While the tobacco plants produced more proteins than expected overall, some plants made more than others. “My goal with this last part of the project is [to take the] guesswork out of it,” Schmidt says. “Can we streamline [this process] to make this project a little quicker in the future?”

Ahner says that the lab might work on other enzymes as well, that could serve entirely different functions. She hints that industry might be working on this process behind closed doors, and wants to make sure the public record is caught up. “We hope that if there are companies growing this in the field that they would benefit from our work.”

Most scientists have a lengthy response to questions about the challenges in an experiment, but Schmidt says just about every step went according to plan. Ahner agrees. “To some extent, these were pretty serendipitous circumstances.”