How Louis Sullivan made skyscrapers happen. 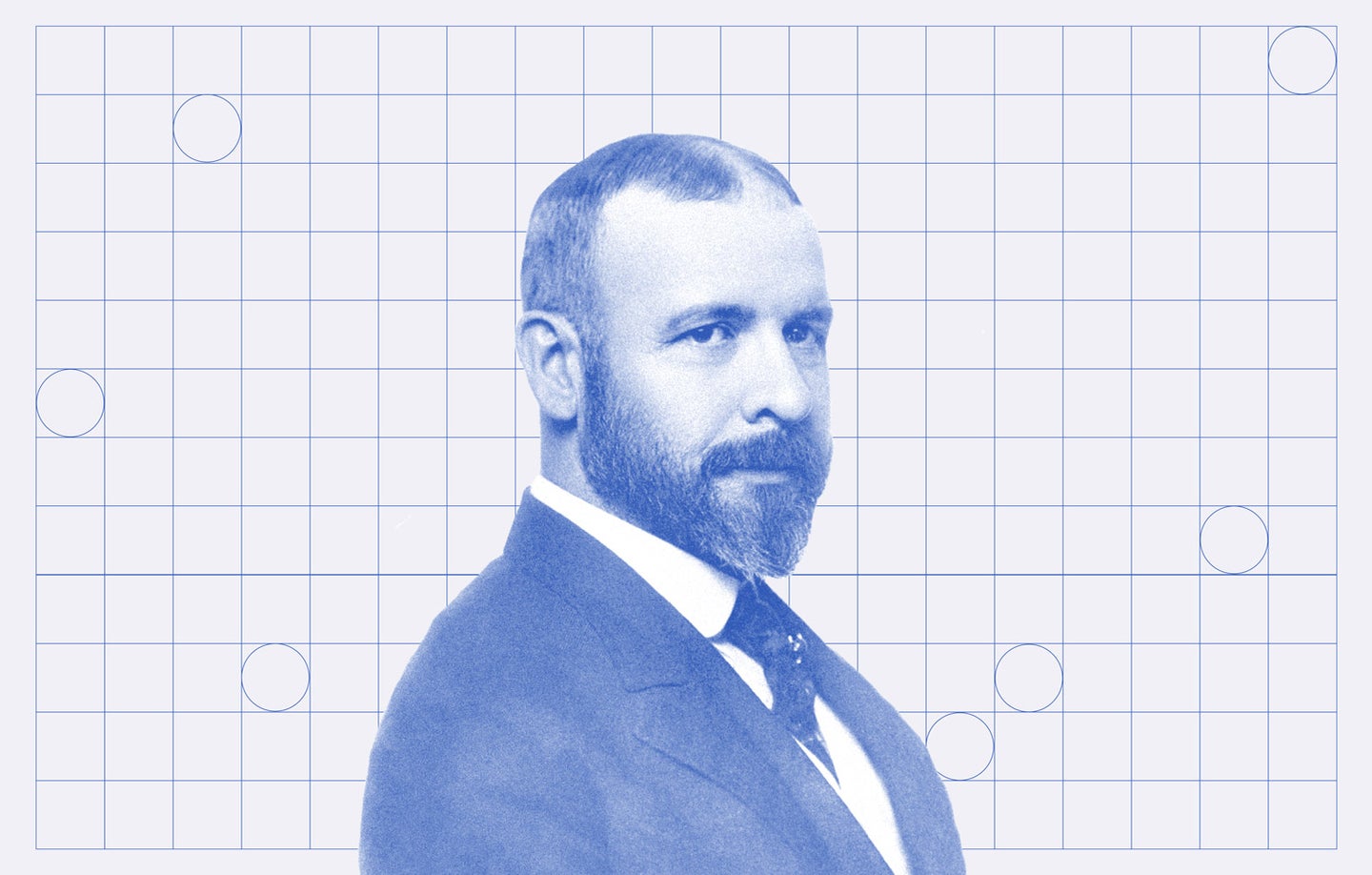 Popular Science’s series, The Builders, takes you behind the construction tape to reveal the individuals responsible for history’s greatest architectural works.

The World’s Columbian Exposition was, by all accounts but one, a roaring success. Between May and October, 1893, more than 27 million people wandered the “White City,” a gleaming neoclassical campus commemorating the 400th anniversary of Christopher Columbus’s arrival in the Americas. The nation’s preeminent architects crammed artificial lagoons, the original Ferris wheel, the first moving walkway, and life-size replicas of the Nina, Pinta, and Santa Maria onto 690 acres on the south side of Chicago. It was so successful it became a template for city planning throughout North America.

Louis Sullivan saw things through a different lens. Unimpressed by the curated knock-off of a European city, the young designer bickered with Daniel Burnham, the fair’s director, even as the work progressed. He wrote in The Autobiography of an Idea that the exhibition set American architecture back “for half a century from its date, if not longer.” Sullivan was disturbed by his fellow architects’ willingness to conform to European aesthetic standards and put their names on conformist derivatives of ancient Greek and Roman structures. What’s more, the buildings did nothing to conform to, or convey, their purpose. Instead of linking the promenade and the exhibition inside, the artful facades merely masked the interiors. So Sullivan and his partner, Dankmar Adler, designed the Transportation Building, an incongruous gold-and-brick edifice in the middle of the pearly white compound.

While their firm is best known for building up, the Transportation Building was a stout horizontal structure. They made it vaguely Romanesque, a medieval style of architecture that emphasized arches, pillars, and barrel vaults. But its kaleidoscopic facade mixed brick with green and pink paint and elaborate carvings in a way that mimicked the intricate, colorful gates to Fez, Morocco or Lahore, Pakistan. Its most impressive feature was the Golden Doorway, a glimmering seven-layer arch culminating above three sets of central doors. The opulent structure made global references, but it was uniquely Sullivan, and, as he would have it, uniquely American.

Although he was still a few years away from articulating his plan for a new style of architecture, Sullivan had always felt a strong sense of moralism about design. His colleague’s adherence to French, English, and Italian tastes embarrassed him, and he saw an opportunity to create a national aesthetic, one unburdened by the legacy of architecture past.

He brought these ideas to the drafting table with varying degrees of success at the twilight of the 20th century. After dropping out of MIT, spending some time in Chicago, and studying in Paris, Sullivan found his niche on the shores of Lake Michigan as the city redefined its skyline in the wake of the Great Chicago Fire. In just two days, the conflagration reduced 3.3 square miles to ash and burned some 17,500 buildings, leaving roughly 100,000 people homeless. Sullivan understood that people needed homes, businesses needed offices, and everyone needed everything built quickly. Architects and builders wasted no time rebuilding the city, erecting thousands of buildings in just a few years. Despite his haste, Sullivan began to forge a distinct aesthetic, one that would earn him the title the “father of skyscrapers.”

That’s not to say Sullivan was the first architect to build up. That distinction goes to William LeBaron Jenney, a Chicago architect for whom Sullivan briefly interned. In 1884, he designed the Home Insurance Building, which historians consider the first modern skyscraper. Puny by contemporary standards, it rose 10 stories—about 138 feet. Jenney’s design used vertical and horizontal beams forged from steel, a lightweight and durable material that became the backbone of urban centers around the world. Instead of building up from the bottom with bricks, workers could hang masonry walls from this metal framework without the structure collapsing under its own weight. The technique revolutionized construction.

With this proof of concept looming over LaSalle and Adams Streets, Jenney started a race for the sky. The Tacoma. The Rand McNally Building. The Rookery and the Monadnock Building. By 1893, a dozen skyscrapers marked the city. This new method of construction represented strength and durability, something Chicago severely needed at the time. It also allowed developers to pack more offices, apartments, or stores onto each parcel of land, bringing landlords more money. “Tall buildings were built out of economic considerations,” says Alison Fisher, architecture curator at the Chicago Institute of Art.

It wasn’t long before high-rises dotted the skylines of cities throughout the country. But Sullivan found them ugly. “Nobody really constructed a tall building, so nobody knew what they should look like,” says Tom Drebenstedt, an architecture tour guide and docent at the Chicago Center for Architecture. “A lot of the early buildings looked like little structures stacked on top of each other.”

In 1893, Sullivan teamed up with German-born, Chicago-bred architect Dankmar Adler to establish a new vision for the midwest. Over the next decade, the duo built dozens of buildings in their emerging style, including the now-demolished Chicago Stock Exchange, parts of which remain on display at the Art Institute. In 1891, they completed work on the terra-cotta Wainwright Building in St. Louis. It is boxy, minimalist, and aggressively vertical. The first floor was reserved for storefronts, while upper floors could be arranged according to the needs of the tenant. The National Historical Register of Places calls “a highly influential prototype of the modern office building.”

Sullivan outlined his thoughts on skyscraper construction in his 1896 essay The Tall Office Building Artistically Considered, in the defunct literary journal Lippincott’s Monthly Magazine. “For the first time, he was saying, [skyscrapers] should have their own look, their own feeling and expression,” Fisher says. Sullivan questioned the tradition among American architects of appropriating European architectural forms. Instead, he articulated a new way forward, one that reflected the nation’s youthful spirit, unburdened by convention.

Drawing from his childhood as an avid naturalist, Sullivan argued that “It is the pervading law of all things organic and inorganic, of all things physical and metaphysical, of all things human and all things superhuman, of all true manifestations of the head, of the heart, of the soul, that the life is recognizable in its expression, that form ever follows function.” He believed that a structure should serve the needs of its inhabitants. Just as flowers aren’t merely beautiful, but a means for attracting pollinators, offices should make employees more efficient and homes should make people more comfortable. In a damning rhetorical flourish reminiscent of the scorn he displayed at the World’s Columbian Exposition, Sullivan asked, “Shall we, then, daily violate this law in our art?”

In many ways, Sullivan’s buildings did break from tradition. Instead of a series of tiny Italian cupolas, one on top of the other, Sullivan demanded unified structures proud of their own height. By stripping excess ornamentation from the upper reaches of his designs, he emphasized the verticality of the buildings, which resembled obelisks. And while many architects imposed their signature style on every building they designed, be it an opera house or an office building, Sullivan favored tailoring each new design concept to its use case. He didn’t always follow his own advice. While he had a rebellious streak, he couldn’t escape the influence of European history entirely; in art and architecture, nothing is truly new. Just as the Transportation Building featured Romanesque details—cathedral arches, Italianate copulas, and sculpted angels—his most provocative works drew on what he knew. Sullivan’s National Farmers Bank in Owatonna, Minnesota, for example, may be a brick “jewel box” monolith, but it’s defined by enormous green stained glass windows, a hallmark of European religious architecture going back at least 1,300 years.

The last gasps of the 1800s were the most productive years in Sullivan’s career. In just 14 years, he and Adler designed more than 100 buildings throughout the midwest. In addition to their knack for supertalls, they established a reputation for creating an ingenious “floating” foundation. Chicago’s bedrock lies beneath silt, mud and clay, none of which lends itself to stable construction. Adler and Sullivan built everything on a mat of railroad tires and concrete studded with steel rails. Some of their buildings settled unevenly, creating cracks in facades and undulations in floors. But 130 years later, many of the structures remain standing. While the method has evolved—modern machinery can dig deeper than 19th century architects ever imagined—their technique became popular among developers of the era.

In less than two decades, Sullivan defined the look of the modern skyline, and saw his idea embraced in cities throughout the world. But his life collapsed quickly. In 1894, Adler & Sullivan dissolved their firm, which was hemorrhaging cash after the Panic of 1893, a profound economic depression. Adler died from a stroke in 1900. Sullivan, never a skilled businessman and struggling with alcoholism, died in 1924 “broke and penniless,” according to the Chicago Tribune.

But even as Sullivan deteriorated and his projects waned (his last commission, a storefront, came in 1922), he continued to publish his musings on architecture, give lectures, and mentor students. “People describe him as just being the most engaging speaker they ever heard,” Fisher says. One of his most prominent proteges was Frank Lloyd Wright, the founder of the Prairie School of architecture. While their styles were radically different—Wright favored long, horizontal lines, while Sullivan embraced verticality—they agreed that beautiful buildings are not an end, but rather a means to better living.

It was this work—writing essays, investing in students, lecturing crowds—that secured Sullivan’s legacy. “We have architects in our collection who are not known at all,” Fisher says. “I sometimes think, ‘They are so incredibly good, why aren’t they famous?’ [W]ith architects, if they teach or if they write, those are the two things that ensure they become a household name.” While he does not have the name recognition of Wright, he nonetheless ensured that his vision of the American city would forever define the urban landscape.