The project would have caused serious gridlock if it dragged on too long. 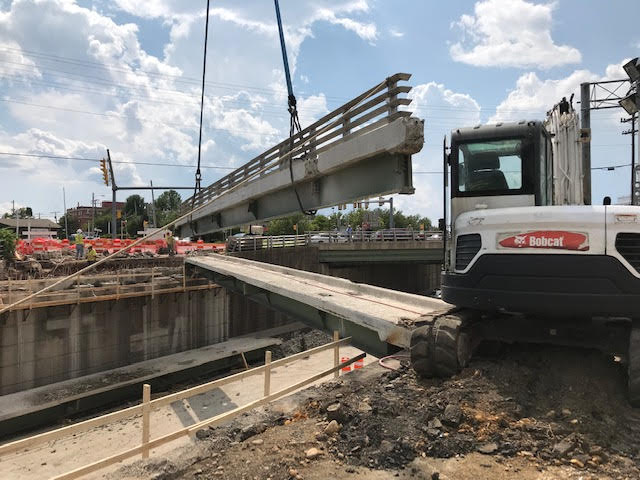 You’ve probably heard the joke about how various northern states have two seasons: winter and highway construction season. That’s because big road repair projects often take months and severely disrupt residents’ mobility. Recently, however, the Virginia Department of Transportation swapped a worn out 61-year-old bridge for brand new one in just a weekend in an amazing time-lapse video depicting the process.

In this case, the bridge was one of several in the complicated Seven Corners intersection in Falls Church, Va. The overpass crosses U.S. Route 50, a very busy commuter route in suburban Washington D.C., and the usual months-long process of demolishing the old bridge and putting up a new one would have created a traffic headache in an area that already has enough of them.

So VDOT’s Northern Virginia office got the idea to do the NASCAR pit stop version of bridge replacement instead. Replacing an 87-foot span of concrete and steel in just 54 hours was an amazing accomplishment that was based on exactly the same kind of planning and preparation.

When the weather forecast looked acceptable for the weekend of Aug 2-4, the team sprung into action. In NASCAR, they don’t remove a wheel from the car, take it to the tire-changing machine, remove the tire from the wheel, mount a new tire, balance it and then carry it back to the car to be reattached. They have four new wheels ready with new tires already mounted on them, ready to be swapped into place.

That’s exactly what VDOT did, by building the replacement bridge in pieces nearby and loading them onto trucks, so everything was at the ready. They not only pre-cast all the concrete pieces rather than pouring concrete onto the bridge deck and waiting for it to cure, they even pre-fit all the pieces together to ensure everything would work together. They also upgraded the bridge’s abutments ahead of time, to be ready for the new span.

Pulling all of these elements together required the right equipment. Just as NASCAR crews use powerful hydraulic jacks rather than the flimsy contraption in your car’s trunk, the VDOT team used a huge crane rated to lift 550 tons to move the 70-ton bridge pieces, said district bridge engineer for the project, Gary Runco. “It was worth it to pay a few extra dollars to be sure the crane absolutely would work,” he observed.

One important difference between this and a pit stop is that the old bridge was maybe more like your family car, whose wheels aren’t removed regularly. So, when the bridge replacement pit crew went to remove the old bridge’s bearings, they found them well stuck after more than six decades in place. As every DIYer expects on a project, of course the access to them was poor, making the job of breaking them loose even harder, Runco reported.

This was their first time doing a quick replacement, so the team also didn’t think to label all the parts when they pre-fit the bridge pieces together. This led to some head-scratching during the swap, as some of the diaphragms that connect bridge girders got mixed up and had to be sorted out during the operation.

Another hiccup in the operation came in estimating how far back to cut the so-called “cheek” walls of the concrete to make room for the new bridge to fit into place, leaving workers to cut out a bit more room during the installation. For a first-time effort, it is incredible that the team was able to execute it with so few surprises and finish right on time in a schedule that wisely anticipated some delays.

Unsurprisingly, many residents are thrilled with the quick-change operation. “We’ve had no complaints and a lot of accolades for getting it done so quickly,” said Runco. Doing so increased the price tag by about 33 percent over traditional methods, but provided a huge benefit in terms of reduced disruption.

After such a successful first effort, VDOT will be looking at other upcoming bridge replacements as candidates for this same quick-swap process to minimize interference with traffic flow, he said. “You can never justify anything with any delays if you include user cost” in the considerations, Runco explained.