Celebrate with some amazing photos of the fluffy stuff.

Volutus clouds are long, tube-shaped, and seem to rotate around the horizontal axis such that they look like they’re rolling. They’re the newly recognized species of cloud, but only occur in altocumulus and stratocumulus types (the ‘cumulus’ suffix means they’re both puffy). This stratocumulus volutus is unusual in that it has layers, much like ogres and onions, where normally it would be smooth and rounded. Christy Gray | International Cloud Atlas
SHARE

Clouds are a lot like Baskin-Robbins. They’re timeless, can be found all over America, and come in 31 flavors. And induce nostalgia.

Yes, there are 31 species of clouds—yes, they’re called species, just like plants and animals—in the new International Cloud Atlas. Bonus: there are also five new “supplementary features” recognized plus five “special clouds,” including the beautifully named flammagenitus, which sounds less like a localized collection of air moisture formed near wildfires and more like a wildly painful STD. And there’s a new accessory cloud, the flumen, which I can only assume is a small storage unit from Ikea (it’s actually a long, flat cloud associated with severe storms). But the pièce de résistance is the single new species: the volutus. Long, round, and rotating, in motion they look a bit like cloud hot dogs roasting on a spit. Only prettier.

Amusing as cloud names are, categorizing them is serious business. The World Meteorological Organization, a subsection of the United Nations, has spent years collecting data from around the world to put together the newest edition of the Atlas. And it’s not just a fun resource to look at lots of pretty cloud pictures—it’s also a reference tool. They’ve basically compiled a massive database of every cloud type along with key information about each image, such that professional cloud observers (yes, that’s a real thing) have an up-to-date source to reference.

It’s been published periodically since 1896, when it was an impressive feat just to have color photographs of the clouds, much less understand complex atmospheric science. Today we know far more about how clouds form and what weather they portend, so our classifications can be more complex. There are 10 overall types called genera, which are divided into different species—31 in all. Those 31 species can be further subdivided into several varieties, which describe the arrangement and visibility of the cloud parts.

So in honor of the 21st-century Cloud Atlas, here are some beautiful cloud pictures (and also some actual information):

Volutus clouds are long, tube-shaped, and seem to rotate around the horizontal axis such that they look like they’re rolling. They’re the newly recognized species of cloud, but only occur in altocumulus and stratocumulus types (the ‘cumulus’ suffix means they’re both puffy). This stratocumulus volutus is unusual in that it has layers, much like ogres and onions, where normally it would be smooth and rounded. 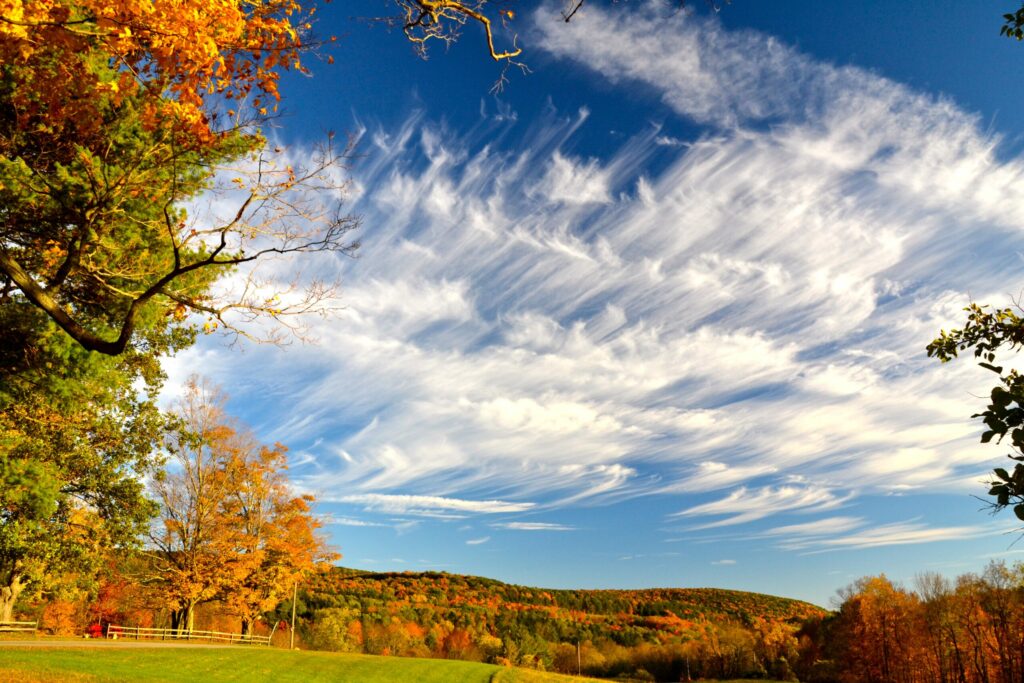 Besides the A+ fall foliage, this photographer managed to get all five species of cirrus cloud at once. All cirrus clouds are wispy, but some types are more wispy than others. Mostly what you’re seeing here are uncinus, especially right in the middle of the image. At the bottom right, where the clouds are longer and more straight, you can see the fibratus species. That floofy line just above the tree line in the center is a castellanus, and the last two species (floccus and spissatus) are the extra wispy bits dispersed throughout. 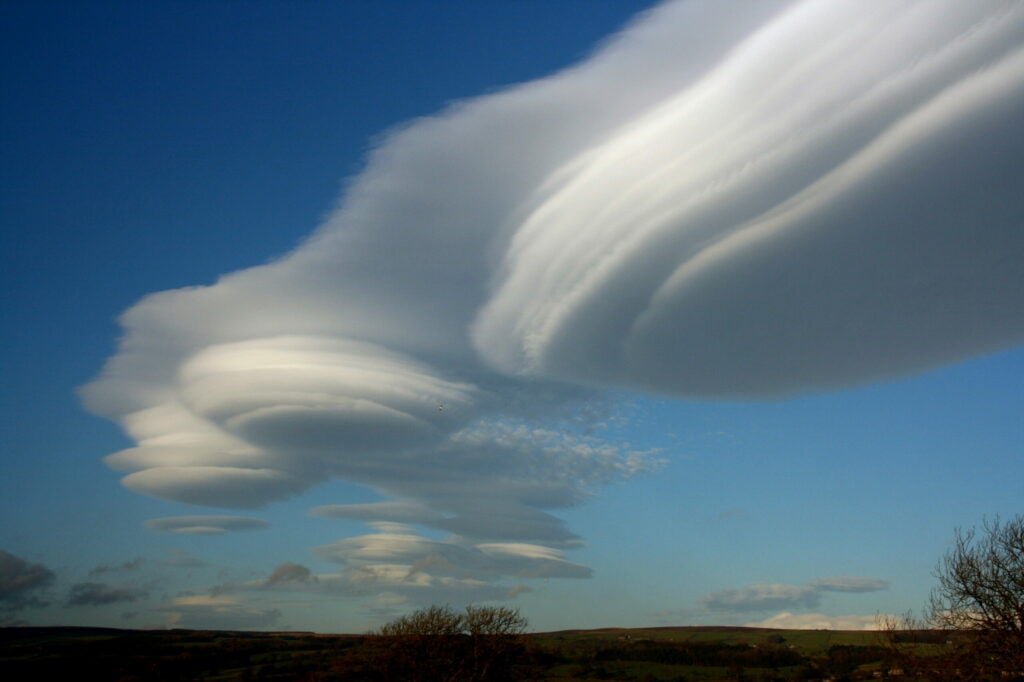 Lenticularis or simply lenticular clouds, named for their lens-like shape, form when there’s stable, moist air currents that create rotating masses of air. The rotation makes for circular clouds and also for a lot of turbulence, which is why pilots often avoid them. It’s also possible that people have mistaken them for UFOs given their nice round shape, which would be especially understandable at twilight and under the influence of less-than-legal drugs. 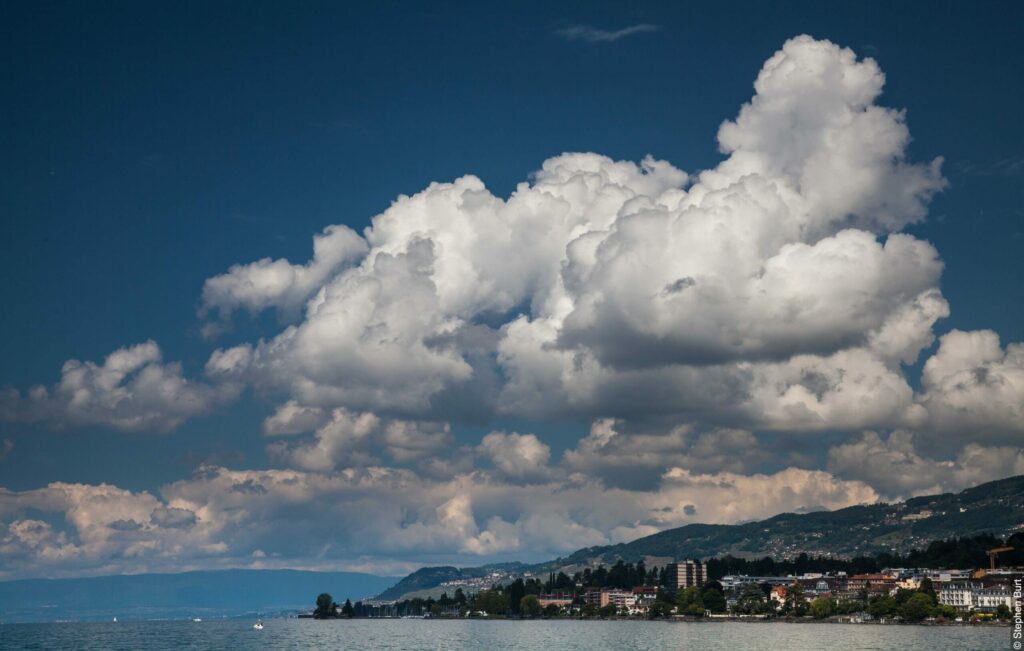 Most of these clouds are cumulus congestus, which—much like a congested nose—have begun to drip with moisture. Cumulus clouds are those stereotypical dense, rounded towers that look a bit like cauliflower with dark, flat bottoms. If they keep growing vertically they can become cumulonimbus, which bring massive thunderstorms or even tornadoes. 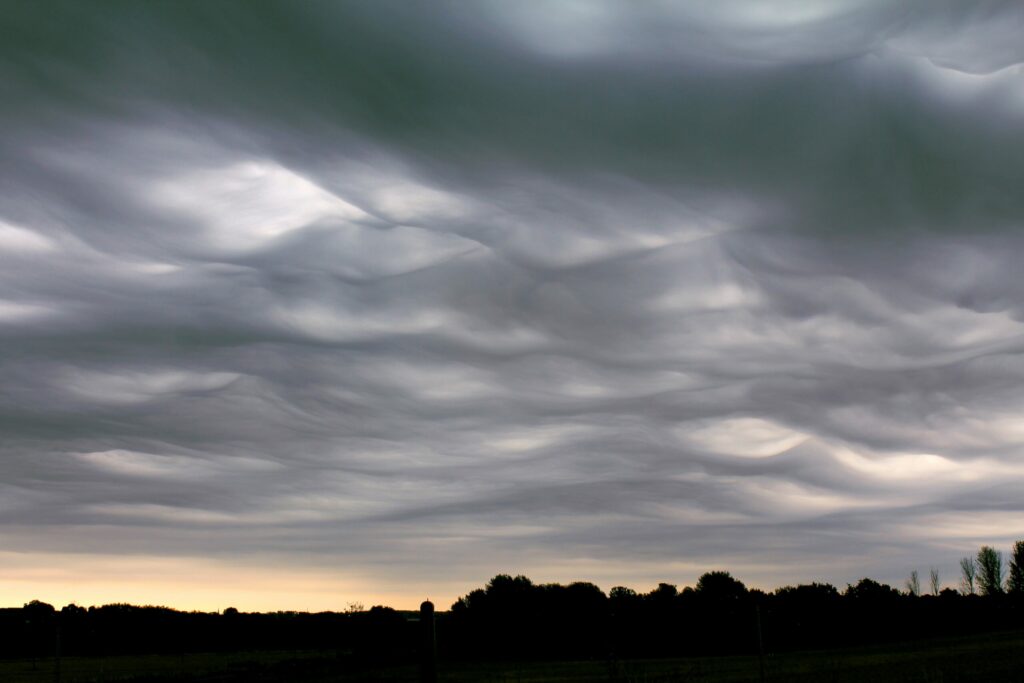 Stratocumulus clouds come in big sheets, with small undulations that make parts of it darker and gives the greyish-white blob some character. The individual waves in this sheet aren’t organized enough to be designated as undulatus, but they are opacus, since they block out the sun’s light. 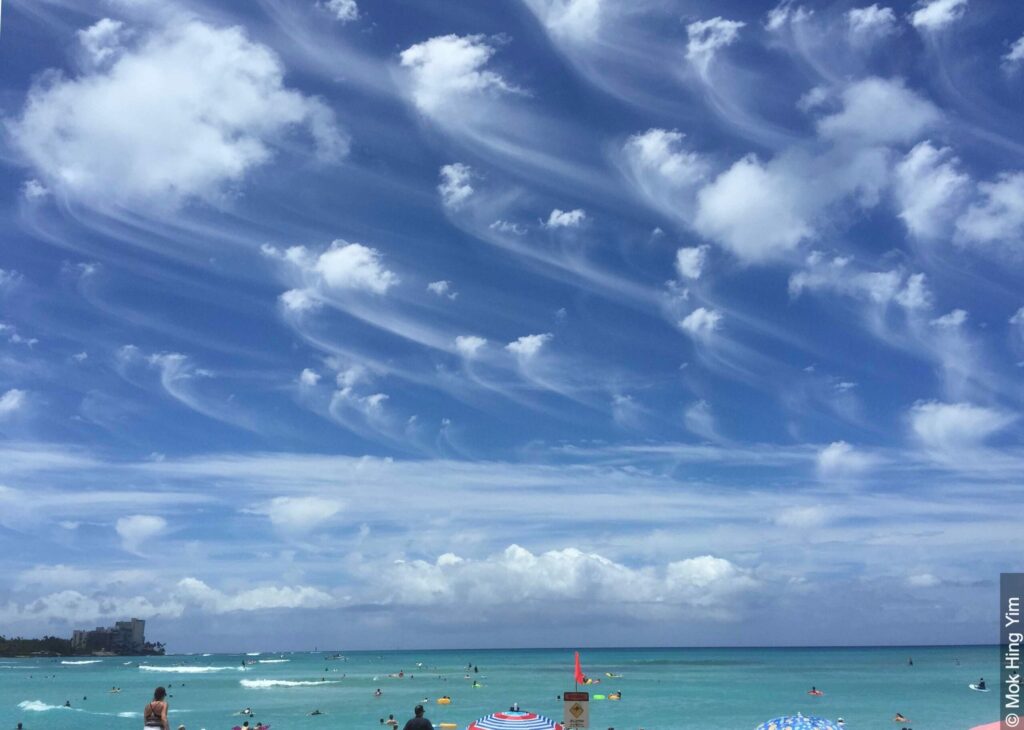 These altocumulus floccus clouds form little tufts throughout the sky. The trails behind them are actually falling ice crystals called virga, which will evaporate before they hit the ground and in the meantime look like little comma tails on the fluffy floccus puffs. 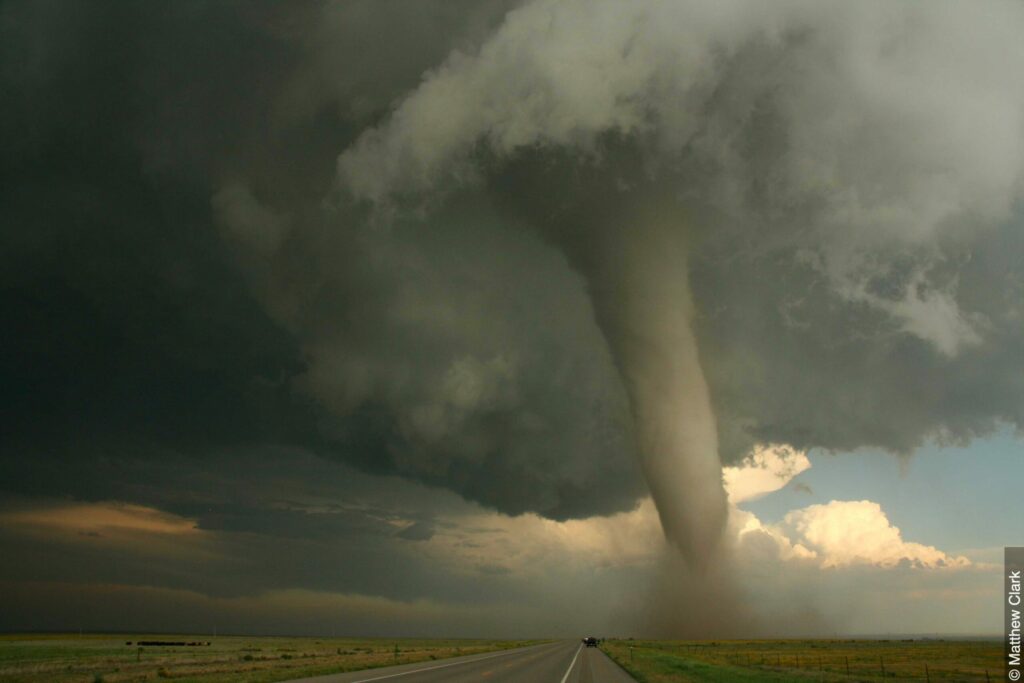 Tornadoes form when the swirling air under a cumulonimbus cloud reaches down to make contact with the earth below. This one is already brownish red from all the dust it’s picked up. 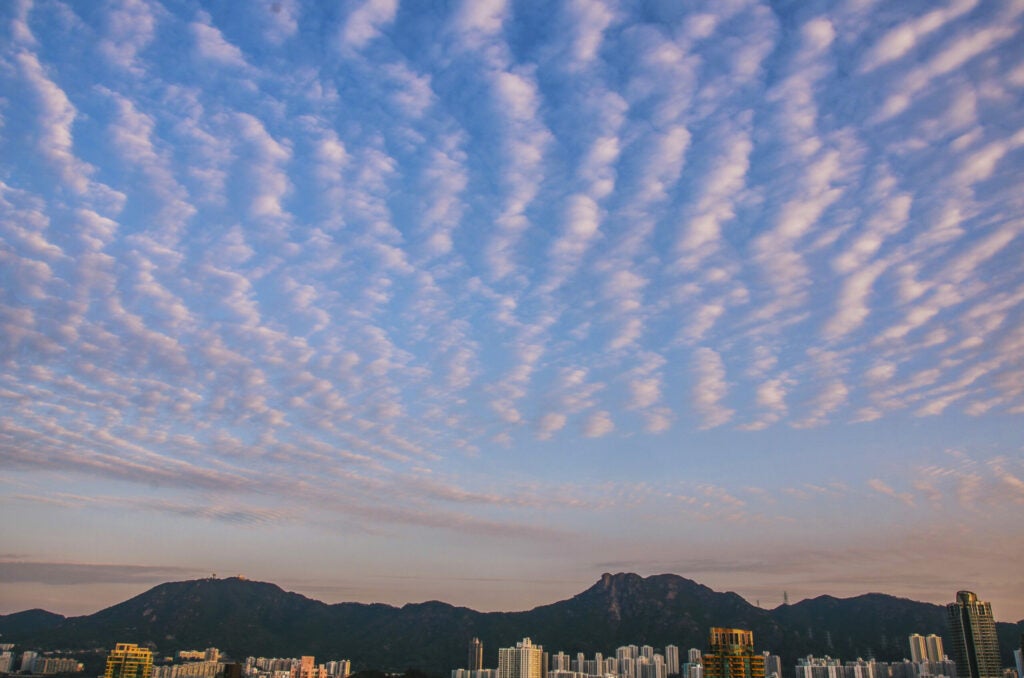 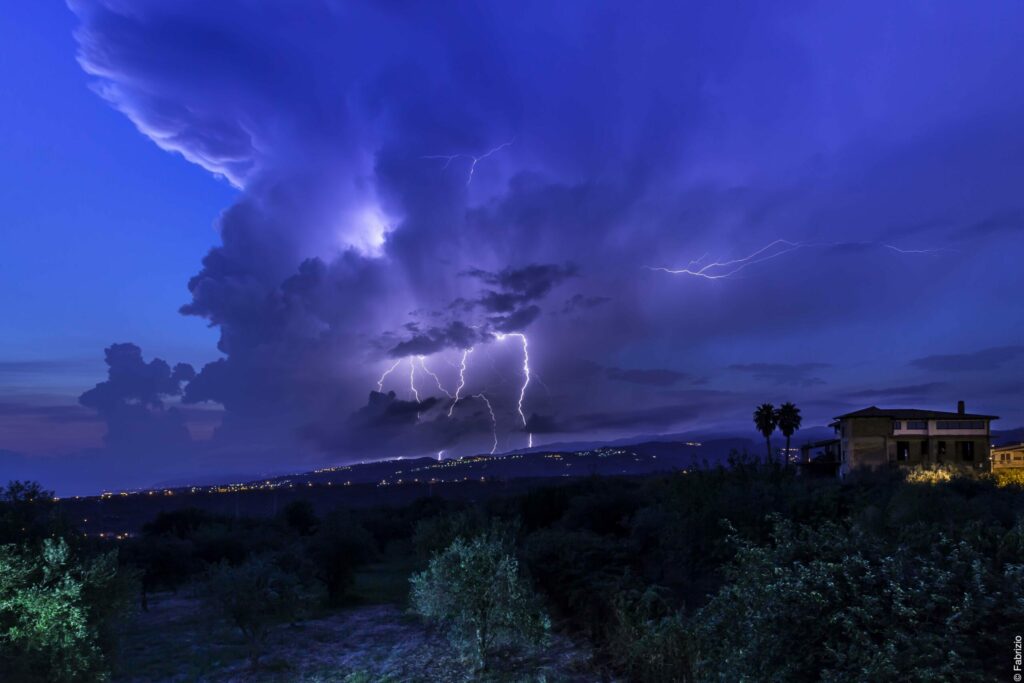 This cumulonimbus capillatus has the classic anvil shape and dense bottom that you probably instinctively equate to a thunderstorm. And you’re right—they almost always produce intense weather like hail storms and lightning. 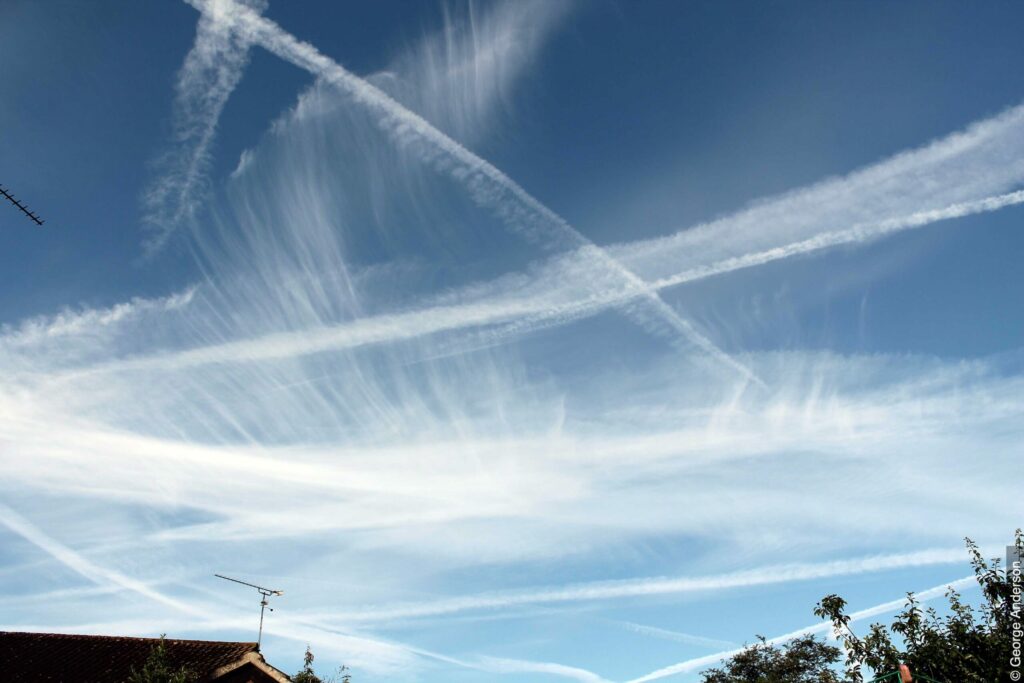 All of these clouds came from airplane activity. The more distinct trails—called contrails—are formed directly from flight paths, but that fluffy area in the middle formed as the contrails spread out and developed into a larger cloud. 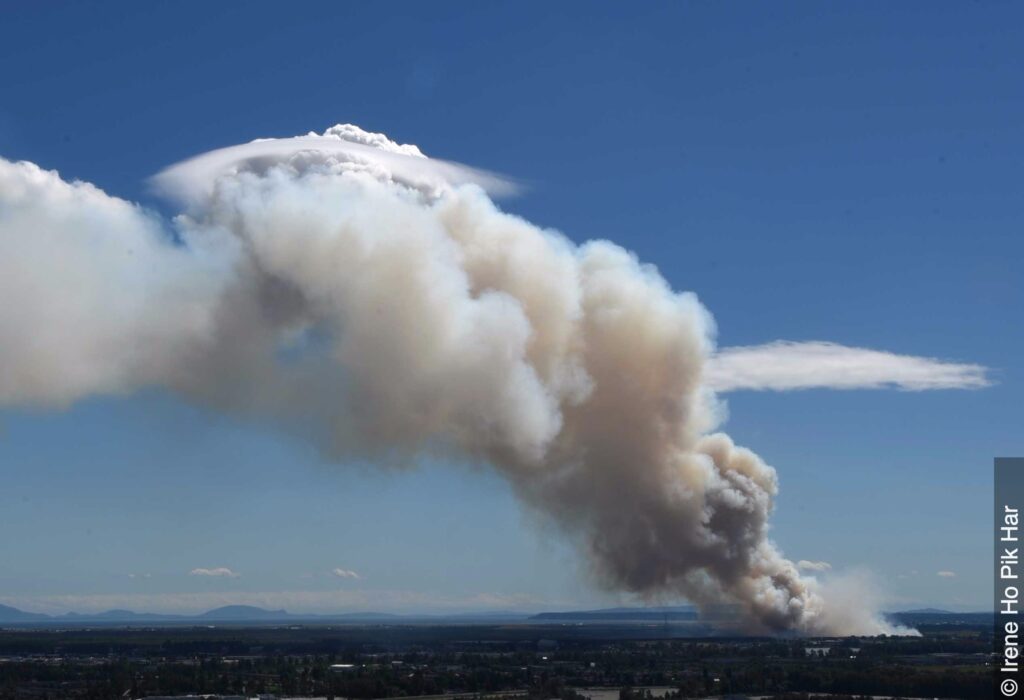 Flammagenitus clouds form above the rising hot air from fires. In this case, most of the “cloud” in this picture is actually smoke, but if you look up towards the top of the plume you can see a white, puffy formation—that’s the flammagenitus. 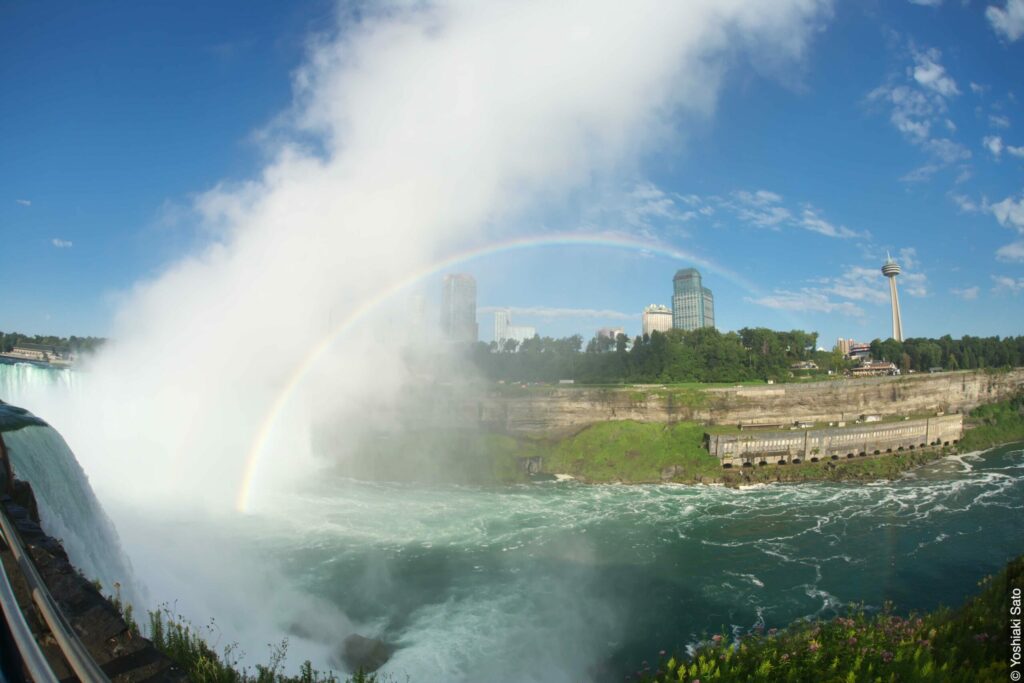 Plenty of water spray comes off of Niagara Falls, and sometimes that aerosolized water can condense into actual clouds, in this case stratus cataractagenitus, with a “spray bow” (a rainbow that forms from the spray of a waterfall) below. 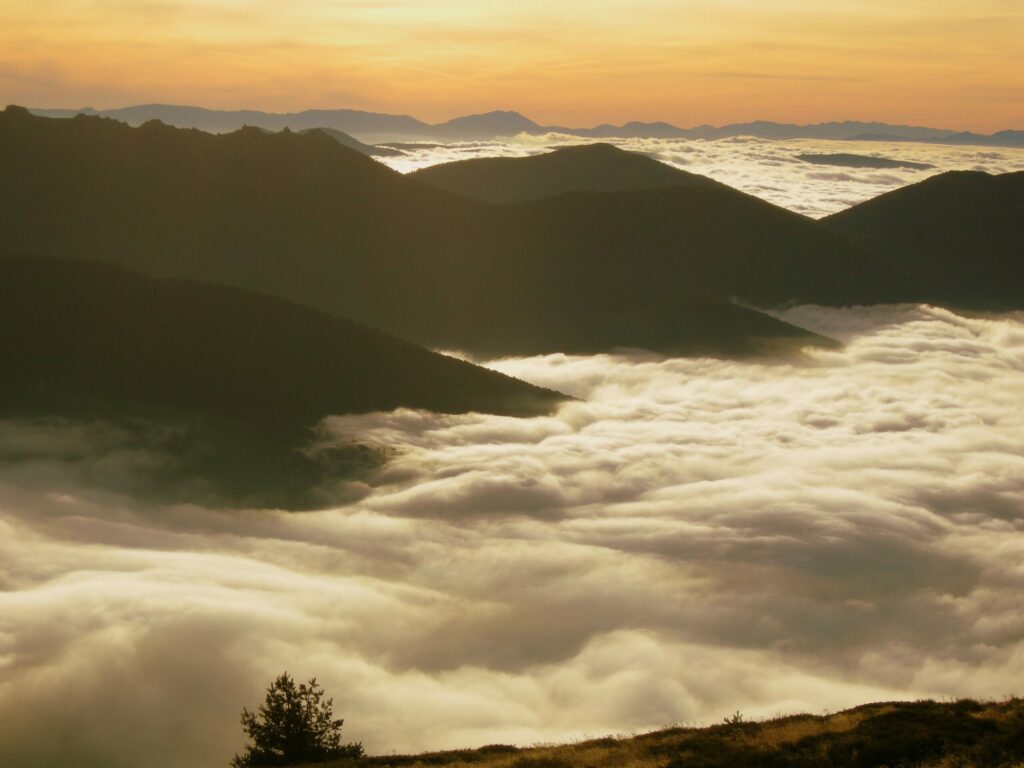 From beneath this stratus cloud, it would be a gloomy day. From above, it’s bright and sunny. 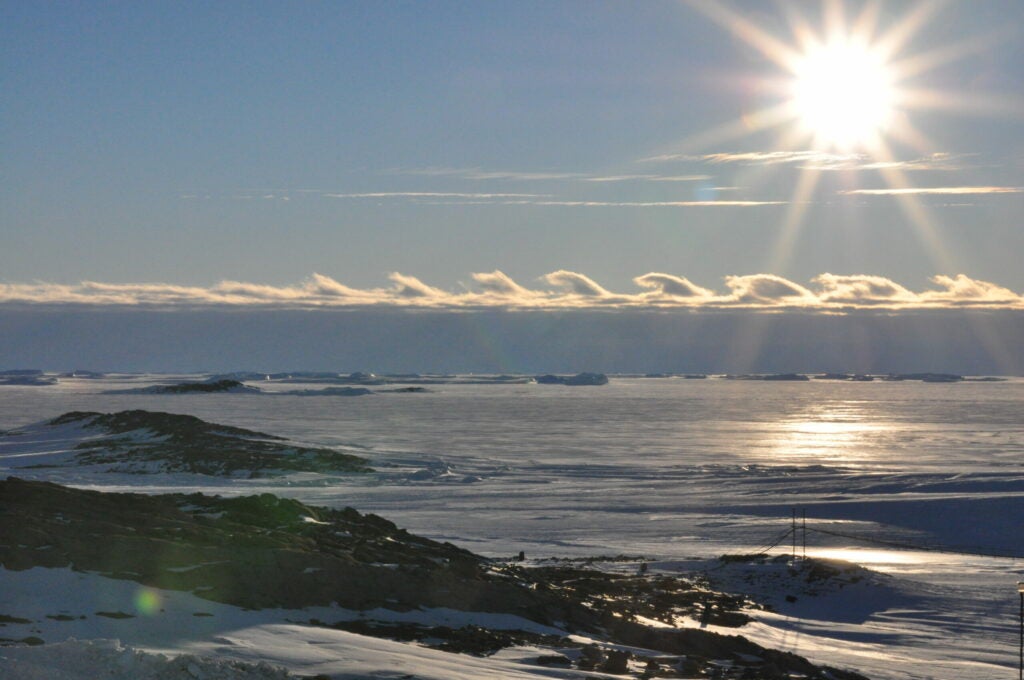 Wind moving across a large cloud like this can form Kelvin-Helmholtz waves, also called fluctus.