Where Do Blizzards Come From? [Vintage Infographic]

This whimsical map from 1923 shows the birth of a typical arctic storm. Is that Old Man Winter lurking in Siberia? 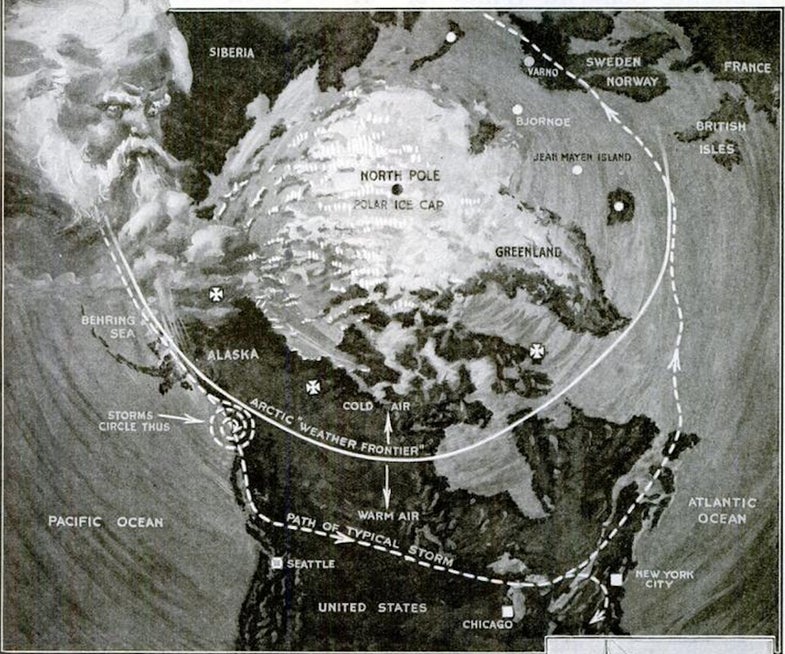 When Popular Science published this blustery infographic in May 1923, forecasters often had little or no warning of approaching storms. Norwegian meteorologist V. Bjerkus Ekerhold proposed an international partnership to build a chain of stations (represented by crosses on the map) around the North Pole that would send several days notice of incoming blizzards to forecasters all over world.

Many of our worst storms are born unobserved on what is called the ‘arctic frontier,’ thousands of miles away from the populous regions which they later assail. Today only one weather station exists in this frigid breeding ground of blizzards. It is on the remote island of Jan Mayen, off the eastern coast of Greenland. Helpful as reports from this farthest north weather station are, really accurate forecasts of the winter’s worst storms will not be available until the entire arctic is circled by similar stations.

Read the full story in the May 1923 issue of Popular Science.